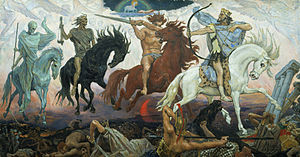 Can you rely on Bible prophecy? Should Christians may attention it to? Did Jesus say to watch? Are world events aligning with properly understood biblical prophecies? Dr. Thiel goes over 19 items, including: 1. Scoffers and the Modern Media; 2. Morality Prophecies Being Fulfilled Daily; 3. Internet Censorship, 4. Weather Sorrows and Troubles; 5. Earthquakes; 6. The White Horse of the Apocalypse; 7. Strife and the Red Horse of War; 8. Trade; 9. The Deal of Daniel 9:27; 10. Knowledge Increasing; 11. Debt; 12. US Dollar Dominance will Decrease; 13. Cash and 666; 14. Gold; 15. Europe Will Work to Reorganize 16. Europe to Have a Great Army; 17. Steps Towards the Formation of the King of the South Will Occur; 18. The Time of the Gentiles will Lead to Armageddon; 19. Jews Ready to Sacrifice. Plus he goes over the need for Matthew 24:14 to be fulfilled. He also mentions various events consistent with those 19.