Passover and the Days of Unleavened Bread will be here soon.

We have been working on various preparations for them.

My trip to Tanzania was very good. I got good time to share with brethren in Tanzania even though I met them in their various places.  Mostly I spent much time with Martin Wanga and Joash Okinyi. Joash was a longtime member of Worldwide Church of God. He is a man who long preached the gospel of the kingdom in East Africa. Most of the people {in Tanzania} knew truth from him. We discussed much more about the work in Tanzania. After that we talked about the Passover 2019.  I took a little video when Martin Wanga was talking about the work in Tanzania in Swahili.  …
Evans

Pastor Martin Wanga is an older man who I met the last time I was in Africa, when I took the photograph above (which did not come out as well as hoped).

Anyway, I am pleased that we are having positive impact in Tanzania.

The children of Israel were specifically told to observe the Passover in the Book of Exodus. Families took a lamb, without blemish (Exodus 12:5), for the sacrifice (Exodus 12:3-4). The lamb was sacrificed on the fourteenth at twilight (Exodus 12:6) and some of its blood was placed upon the door of the family’s home (Exodus 12:7).

Those who took the steps God instructed were ‘passed over’ from death, whereas the Egyptians who did not do this were not (Exodus 12:28-30).

Passover was observed on the fourteenth day of the month of the first month (Leviticus 23:5; called Abib in Deuteronomy 16:1 or Nisan in Esther 3:7). It occurs in the Spring season of the year.

The Apostle Paul specifically taught that Christians were to keep Passover in accordance with Jesus’ instructions (1 Corinthians 5:7-8; 11:23-26).

The Bible teaches that Jesus “was foreordained before the foundation of the world” (1 Peter 1:20) to be “the Lamb slain from the foundation of the world” (Revelation 13:8). Thus, God’s plan of salvation through His Holy Days and festivals, including Jesus being the “Passover lamb,” was known before humans were placed on the planet. That is why some of the celestial bodies were placed in the heavens to be able to calculate them!

Pretty much all churches recognize that the Bible teaches that Jesus fulfilled something associated with Passover when He was killed.

The famous Passover in the days of Moses showed the deliverance of the children of Israel from Egypt (Exodus 12:1-38). Moses recorded God’s instructions about this as well as the calendar (Genesis 1:14; 2:1; Exodus 12:1) and His feasts (Leviticus 23). The Passover basically became the first of these events annually picturing to God’s children His great plan of salvation.

In the Old Testament, the Passover pictured deliverance from the bondage of Egypt and God’s intervention. But, prophetically, it was also looking towards the time that Jesus would come and be our Passover lamb (1 Corinthians 5:7). The Lamb of God who came to take away the sins of the world (John 1:29; cf. 3:16-17).

Jesus, however, changed several of the practices associated with its observance.  Jesus made the unleavened bread and wine an integral part of Passover (Matthew 26:18, 26-30) and added the practice of footwashing (John 13:12-17). 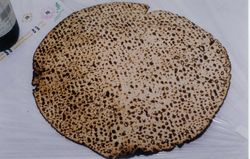 Jesus in no way taught that it was not to be an annual Passover, nor did He change the time of day of its observation to a Sunday morning like those who follow Greco-Roman traditions do. Even Greek Orthodox scholars admit that 1st and 2nd century Christians kept Passover at night (Calivas, Alkiviadis C. The Origins of Pascha and Great Week – Part I. Holy Cross Orthodox Press, 1992) like we in the Continuing Church of God do in the 21st century. Passover is only to be taken by properly baptized Christians (cf. 1 Corinthians 11:27-29; Romans 6:3-10; Exodus 12:48; Numbers 9:14).

It probably should be added that the Church of Rome (as well as many of its Protestant descendants) officially teaches that it keeps Passover, though calling it something different in the English language and not keeping it as Jesus did (Catechism of the Catholic Church. Doubleday, NY 1995, p. 332).

Despite the fact that Jesus turned water into wine (John 2:3-10) and the Greek term used in the New Testament (oinos) refers to wine (cf. 1 Timothy 3:8), various ones have claimed that it was grape juice, and not wine, that was used for Passover. The Jews, themselves though, use wine at Passover (Hisrch EG, Eisenstein JD. Wine. Jewish Encyclopedia. 1907, pp. 532-535).

How do we know that grape juice was not possibly used by Jesus?

Grapes are normally harvested around September and Passover is usually in the Roman calendar month called April. In Jesus’ day, they did not have modern sterilization or refrigeration. Hence, grape juice would have spoiled between the time of harvest and Passover.

Others have noted that it was IMPOSSIBLE for Jews to have stored grape juice that long (Cf. Kennedy ARS. Hastings Bible Dictionary. C. Scribner Son’s, 1909 p. 974). Therefore, only wine, which can remain unspoiled for even many years would have been used.  (The use of alcohol, like wine, is endorsed the Feast of Tabernacles in Deuteronomy 26:14, but not required.)

Christians are not to be “drunk with wine, wherein is excess” as Paul wrote (Ephesians 5:18, KJV). Only a very small amount of wine is normally consumed at Passover (about a teaspoonful or less–and for sensitive individuals maybe only a drop or two–like some might take with an herbal tincture).

As far as the time before Passover goes, the Apostle Paul wrote this:

Paul is clearly teaching that to take this bread and wine, one must examine oneself. The deleavening that is supposed to accompany Passover helps us focus on our faults and sins, and thus helps fulfill this command from Paul to examine ourselves. As deleavening can take lots of effort, this also supports the concept of an annual examination (people were not removing leaven every day or week).

The New Testament records that both Jesus and Paul taught to observe the Passover in the Christian manner.

And that was an annual observation.

We have an online video service for Passover for those in areas without a local minister. Here is a link: CCOG Passover Service.

Furthermore, some of you may wish to read the article: Keeping Passover and the Days of Unleavened Bread.

Don’t just focus on going through a ceremony.

You should be examining your spiritual and physical life now as Passover is approaching.

Here is a link to a recent sermon: Really examine yourself before Passover.Passover for 2019 will be here soon.

As a reminder, Deacon Richard Close is planning on a personal visit and counseling trip thru the upper mid-west starting from his home in Pennsylvania. He intends to be in Almont, Michigan April 13th for Sabbath services @ 2 PM  He would like to welcome all who wish to attend. If you wish to attend services there, please contact Terry LaFrance–his email address is terrylafrance22@gmail.com

Deacon Close plans to leave Michigan on Sunday April 14 to travel to Madison, Wisconsin and return back to Pennsylvania as late as April 17. If there is anyone located in the area of travel (which would also include northern Indiana, Illinois, and Ohio) that would like a personal visit (or perhaps drive to meet for a meal, etc.), please contact Richard Close via e-mail  Closesr@comcast.net  prior to April 13th so arrangements can be scheduled.

He has requested prayers from the brethren for God’s guidance, protection, and wisdom on this trip.

The Trump Administration is threatening Europe with more tariffs that the EU is not happy about (see Trade war? Europe slams ‘exaggerated’ US tariff threat and prepares to retaliate). Furthermore, because of Brexit concerns and other factors, the Germany economy already seems to be wobbling (see Germany’s declining exports: Could this be a reorganization trigger?). Yet even if Europe’s economy gets much worse, we know biblically it will reorganize (Revelation 17:12-13)–and there are anti-migrant parties in Europe that hope to cause a reorganization after EU wide elections next month (see ‘Euroskeptic, anti-immigrant parties team up for EU election’). While the reorganization of Revelation 17:13 will NOT happen in 2019, one day Europe will rise up to temporarily dominate the world economy (cf. Revelation 13, 17, 18). I expect that USA factors as well as means such as technology will be involved in its eventual economic rise (see also European Technology and the Beast of Revelation).

As far as the USA goes, one study came out finding its residents are becoming more Godless, while another found that more Americans see the USA in decline (see As America becomes more Godless, more see it declining). Without national repentance, the USA is doomed (cf. Habakkuk 2:6-8), and Europe will be the power God uses to eliminate it (cf. Isaiah 10:5-11; Daniel 11:39).

The UK arrested Wikileaks co-founder Julian Assange today on behalf of the USA and the EU has granted the UK an extension of Brexit until October 31, 2019. Wikileaks highlighted US espionage on the EU, Vatican power manipulations, and emails related to the 2016 presidential elections that upset various ones (see ‘WikiLeaks’ Julian Assange Arrested in London;’ Plus Brexit extended). Brexit, of course, has also upset the EU. These matters will not end well for the UK nor USA (cf. Daniel 8:24-25, 11:39).

The other development in Israel was a national election. At this instant, it looks like Benjamin Netanyahu was re-elected for a record 5th term as prime minister (see ‘Israeli Election Puts Netanyahu on Track for Fifth Term’). This, and certain other recent developments related to Israel, have further inflamed Iran, Syria, and the Palestinians. We should expect to see more violence before we see the type of deal prophesied in Daniel 9:27.

2 Bear one another’s burdens, and so fulfill the law of Christ. 3 For if anyone thinks himself to be something, when he is nothing, he deceives himself. 4 But let each one examine his own work, and then he will have rejoicing in himself alone, and not in another. 5 For each one shall bear his own load. (Galatians 6:2-5)

Brethren, examine yourself and be concerned about helping others.