Greetings once again from Five Cities region in California.

We have had a full week working on messages, coordinating activities, working on literature, and getting ready for the Holy Days.

Passover, the Night to be Observed, and the Days of Unleavened Bread

Passover, the Night to be Observed, and the Days of Unleavened Bread are coming right up.

Speaking of Passover, along with unleavened bread (see Keeping Passover and the Days of Unleavened Bread), wine (not grape juice) is used (see Wine or Grape Juice for Passover?).

That being said, all (adults and children, baptized or not) should attempt to keep the The Night to Be Observed and Days of Unleavened Bread.

Since this letter is sent out on Thursdays in California, those who live many time zones away will tend to get it after sunset on Thursday or some even sometime on Friday. Therefore, here are links to assist you on who should be observing Passover, as well as for everyone who should observe the Night to be Observed:

Keeping Passover and the Days of Unleavened Bread How should Christians keep Passover, especially if they are by themselves. Why does the Church of God not require lambs for Passover? How does one keep the Days of Unleavened Bread? For a step-by-step video for Christians to keep it, check out CCOG Passover Service. Here is a link to a related article in the Spanish language: Guardando la Pascua y los Días de los Panes sin Levadura.
Preparing for Passover The Apostle Paul taught that Christians should examine themselves prior to taking Passover. This YouTube video sermon gives suggestions on how to prepare.
Unleavened Bread recipes A Serbian COG member sent these recipes for those who would like more ways to prepare unleavened bread.
The Night to Be Observed What is the night to be much observed? When is it? Why do Jews keep Passover twice and emphasize the wrong date? A related video is available and is titled The Night to Be Much Observed.

While you do NOT have to use the CCOG Passover Service video, for many it is helpful and ensures that nothing is missed.  Otherwise, the instructions in the article Keeping Passover and the Days of Unleavened Bread also should suffice.

The Night to be Observed is Friday, April 22nd, after sunset, and this begins the Days of Unleavened Bread.  Instructions as to how to keep that Night are in the article The Night to Be Observed. We made a new video this year, that is optional to watch then, titled The Night to Be Much Observed.

The recommended sermon for the Sabbath of April 16, 2016 is Passover Examination.

Received the following from Warren Savage:

We will be holding services here in Milton On. for Passover, Night To Be Observed, First and Last Day of Unleavened Bread. Services will be held in our normal spot! If you are interested in attending , please contact  Michael Radtke at michael.radtke@sympatico.ca

As mentioned in last week’s Letter to the Brethren, services in Canada will also be in New Brunswick in Canada.

We had a couple of delays in getting the April-June 2016 edition of the Spanish magazine ready (see Noticias de Profecía de la Biblia abril-junio 2016), but it should be sent out later this month to our Spanish language subscribers. We have been changing to a CreateSpace version in order to save both time and money. And we did both, even with this current issue. 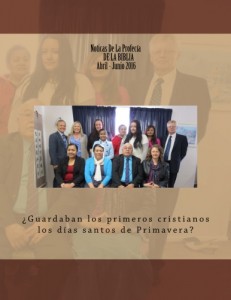 We are basically working at how to perform more magazine and booklet magazines with sources that better respond to our time schedules.  But there is a ‘learning curve’ associated with this.

However, since it is our intent to have literature in dozens of more languages (beyond the approximately 15 languages or so we currently have), this is something we are working to get better at.

Pope Francis put out a paper, basically telling Catholics to tolerate other Catholics who do not comply with that church’s standards of sexual morality (see Amoris Laetitia: Pope Francis encourages greater acceptance of those with lifestyles opposed to by the Bible). While the Church of Rome can set its own standards on that, the Pope’s view certainly is not in accordance with the Bible–even Catholic versions of it (see also this week’s suggested sermonette Pope Francis’ Tolerance of Immorality is Not Biblical). The Pope’s agenda on these matters is sometimes consistent with that of the United Nations and European Union, despite specific Catholic teachings to the contrary.

The Prime Minister of Ukraine announced his resignation (see Ukraine’s PM announces resignation; Coventry University poster blames USA for some of Ukraine’s problems and warns of problems for Americans). The situation in Ukraine has been tense and bad for some time. Ukraine, like the rest of the world. needs the Kingdom of God.

In the South China Sea, China has been building up a presence in the Spratly Islands.  This has concerned her neighbors, as well as Australia and the USA (see US Admiral mentions China’s ‘great wall of sand’ concerns; what about Australia?). Yet the Prime Minister of Australia, who is to bring 1,000 business people with him to China today, while having concerns about China’s South China Sea issues, is more focused on his nation’s economy and his upcoming election. While Australia believes that the USA will defend it, the time will come when the USA will be taken over itself (Daniel 11:39).

Speaking of China, a judge there yesterday ruled against “same-sex marriage” (see China rules against ‘same-sex marriage;’ MD warns of transgender agenda dangers). Last month, China also announced that broadcast restrictions to reduce the promotion of homosexuality, under-clothed females, and adultery. In many ways, the officially atheistic nation is more sensitive to the rise of sexual immorality than the once somewhat Bible-respecting West.

If your internet connection is still too slow (as my home one is) and/or you prefer audio messages to audio-visuals ones, go to the YouTube link for the message, click on SHOW MORE related to the description. You will then see something that says, “Download MP3.” Below that is a link to an MP3 file. Most computers (and even some cellular telephones) will allow MP3 files to be downloaded and played. This is an option we have made available (but we are also looking into ways to improve that as well)–and, of course, we have written article options. Some people have found that if their internet connections are not fast enough, that they can simply listen to the messages that are found at the new Bible News Prophecy online radio channel.

26 For as often as you eat this bread and drink this cup, you proclaim the Lord’s death till He comes.

27 Therefore whoever eats this bread or drinks this cup of the Lord in an unworthy manner will be guilty of the body and blood of the Lord. 28 But let a man examine himself, and so let him eat of the bread and drink of the cup. 29 For he who eats and drinks in an unworthy manner eats and drinks judgment to himself, not discerning the Lord’s body. 30 For this reason many are weak and sick among you, and many sleep. 31 For if we would judge ourselves, we would not be judged. 32 But when we are judged, we are chastened by the Lord, that we may not be condemned with the world. (1 Corinthians 11:26-32)

Brethren, Passover is almost here.  Have you been examining yourself?  If not, you need to start now!