Always much going on. The workload sometimes seems vastly overwhelming.

There are many issues and needs around the world, as well as the need to continue to work on matters related to the final phase of the work. All of which were worked on this past week, like pretty much every week. Progress is being made.

I really do appreciate your prayers. So, thank you for them.

Speaking of prayers, please continue to pray for our New Zealand host, John Hickey. His wife Shirley emailed me today and told me that he now has been hospitalized.

We were informed by Radson Mulozowa the Continuing Church of God is now officially registered in the African nation of Malawi. In various African nations, registration is needful so that the government does not consider a church to be a probable terrorist organization.

There are other countries in Africa that we are also looking to be registered in (we have been registered in Kenya, for years, already).

In the West, we have tended to be registered for reasons of propriety (like legally entering into contracts) as well as for tax-related reasons. In the West, we are registered in the USA, Canada, and New Zealand. But some countries, like Serbia, do not wish to register small churches, and that is part of why we have not attempted registration there. 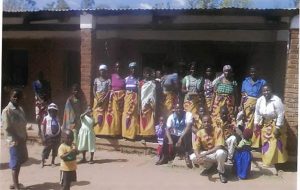 This is mainly the CCOG women’s choir in the Migowi, Malawi congregation

Migowi is in southern Malawi.

Greetings Pastor Bob,let Me Thank God For The Marvellous Work That Is
Happening In Our Midst.I Failed To Report Early Due Internet
Problem.We Are Experiencing Church Growth In Both Countries Through
The Fundemental Teachings Of CCOG. We Are Able To Open Another
Church In Phaloni. The Travelling Is Becoming Easy Following Your
Assistance. I Was Able To Visit Zambian Brethren. There Are Doing
Fine.Since They Are Meeting In The House Until The Registration Is
Done.I Have Told Justin To Get Information How Much Is Needed So That
We Register The Church Before Evans Visit Them. After Coming From
Zambia I Found The Message From Mozambique That There Goverment Needs
Me To Go And Collect The Registration Documents. Matiya Was Not Able So
I Have Been Going There Several Time To Process It.Am Happy To Tell
You That It Is Done Now.

It has been good to get growth in Malawi as well as interest from Zambia. And it looks like we will be in the process of registering in Mozambique.

Last week, I mentioned that I was  scheduled to be on The Morning Show with Mike Hogan of KHUB/KFMT/KBLR, Fremont, NE. The host asked me about my writings and we went over events aligning with biblical prophecies–we also discussed matters like ‘preterism’ (the false view that the great tribulation occurred long ago). This is the first time I had been on his program.

I am now scheduled, again, to be on the Nutri-Medical Report on the Republic Broadcasting Network (RBN) Friday, August 11th at 12:00 pm CDT.  This will probably cover world events and prophecy. The host also has a link up related to me: http://deagle-network.com/bob-thiel-bible-prophecy-and-the-trump-presidency/

Now, in case some wonder, I am not the only one in CCOG to be interviewed on the radio. Elder Aleksandar Veljic from Serbia has been as well–and in English.

Glad to inform you that Grantone and I will be on vernacular station called Milambo FM to discuss the second coming of Christ and His 1000 year rule on the earth! This will be on Monday from 6.00PM -7.00pm.
We will take one hour which will be subdivided into two sessions.One for some sort of interview (about 40 minutes) and the rest will be for questions and answer.
Someone was moved to pay for this radio program. Pray for us so that we may do this regularly!
Best regards
Ondigo Ochieng

So, it looks like he and Grantone Otieno were on the radio on Monday, August 7th. Grantone Mangiana Otieno is a CCOG host, Migori in Kenya. No report from them after being on has yet been received.

Though I never mentioned that to anyone, I noticed that in the tithes and offerings we have received so far this month, several of you included a little more than you usually do.

So, I thought this would be a good time to say, “Thank you.”

A significant amount of what we bring in goes to Africa, and there are always needs there that additional funds can meet.

With more Africans in CCOG than ever before, our support needs are higher than they have been in the past.

Again, thanks for the support.

Speaking of prophecies, the Bible foretells of a time that Europe will dominate international trading (cf. Revelation 18) and will trade with nations like Russia (cf. Ezekiel 27:12-14). The Russian sanctions bill that the US Congress passed, and that Donald Trump reluctantly signed this past week, has upset not only Russia (see Russia warns of full-scale trade war over US sanctions), but continues to upset the Europeans as well. Furthermore, this bill is driving Europe more towards Russia and away from the USA (see ‘Imperial Folly Brings Russia And Germany Together’) and the UK (see ‘Now, A Trade War; Next A Shooting War?’ USA-UK dividing from EU-Russia? USA to fight North Korea?). World events continue to align with properly understood biblical prophecies.

Over in China, drills were done to practice shutting down websites that the government does not approve of (see China’s internet censorship drills: Another prelude to the coming famine of the word?). The Bible tells of a coming ‘famine of the word’ (Amos 8:11-12) and I believe that this will involve internet censorship of at least some of what we teach. While China will not be the only power to restrict internet access, once Matthew 24:14 is fulfilled, look to one or more governments in the world getting content off the internet like our booklet The Gospel of the Kingdom of God, which is available in 90 or so languages. It is possible that the Chinese drills will uncover some techniques that other governments may also use to prevent access to various biblical truths.

Over in Africa, there have been violent protests in Kenya over its presidential election this week (see Kenyans protesting preliminary election results). Essentially, protesters believe that the controlling party intentionally has misreported the actual vote and that the opposition leader should have won. While there have been voting discrepancies noted, violent protests are not the answer. The Independent Electoral and Boundaries Commissions is looking into this–whether or not that will change the outcome, or help,  is not clear at this time.

Over in South America, many Venezuelans have not been pleased with their recent election giving the government more authority nor the direction of their country (see Venezuela: Problems continue). There is much poverty now in a mismanaged nation that is believed to have more oil reserves than Saudi Arabia.

We all need to pray for God’s Kingdom to come as Jesus instructed His followers to do (Matthew 6:10).

In his second letter to Timothy, the Apostle Paul wrote:

13 Hold fast the pattern of sound words which you have heard from me, in faith and love which are in Christ Jesus. 14 That good thing which was committed to you, keep by the Holy Spirit who dwells in us.

15 This you know, that all those in Asia have turned away from me, among whom are Phygellus and Hermogenes. 16 The Lord grant mercy to the household of Onesiphorus, for he often refreshed me, and was not ashamed of my chain; 17 but when he arrived in Rome, he sought me out very zealously and found me.  18 The Lord grant to him that he may find mercy from the Lord in that Day — and you know very well how many ways he ministered to me at Ephesus. (2 Timothy 1:13-18)

Brethren, we are to “hold fast” to the true and original faith, even though there have been many who have fallen away. Holding fast is specifically something that Jesus told the Philadelphian Christians to do in Revelation 3:11.

We are to hold fast to the truth and the proclamation work in this Laodicean era. We should all strive to have the proper zeal as the faithful early Christians did.