The Feast of Tabernacles and the Book of the Law

Where is the True Christian Church Today?

We have an article titled: How does the Continuing Church of God differ from other Sabbatarian COG groups?

The article lists twelve ways. Here is the first:

10 … “At the end of every seven years, at the appointed time in the year of release, at the Feast of Tabernacles, 11 when all Israel comes to appear before the Lord your God in the place which He chooses, you shall read this law before all Israel in their hearing. 12 Gather the people together, men and women and little ones, and the stranger who is within your gates, that they may hear and that they may learn to fear the Lord your God and carefully observe all the words of this law, 13 and that their children, who have not known it, may hear and learn to fear the Lord your God as long as you live in the land which you cross the Jordan to possess.” (Deuteronomy 31:10-13)

Despite this being in scripture, it was not something done in any of the COG groups I had been a part of. The first year I was asked to given sermons (as opposed to sermonettes which I had been doing for years) at the Feast of Tabernacles, it seemed that this is something I should attempt to do.

I made an attempt to go through the Book of Deuteronomy during a sermon in 2006 in Antigua, Guatemala (here is a link to my updated notes from there The Feast of Tabernacles: A Time to Learn the Law).

In 2012, I wondered what I might do in 2013 as that would be seven years later. As it turned out, unexpectedly, 2013 ended up being the first Feast of Tabernacles for the Continuing Church of God. Therefore, this gave an opportunity to cover the Book of Deuteronomy in a series of sermons.

Since the Bible teaches that the “word of the law” needs to be preached as part of the Feast of Tabernacles every seven years (Deuteronomy 31:10-13; cf. Nehemiah 7:73;8:1-3,8,13-17; Joshua 8:34), instruction about covering the law, especially through the light of the New Testament, was conveyed to those giving sermons at the CCOG sites for 2013–and it happened. It is not that other subjects cannot also be covered then, but reading and explaining the law needs to be part of the Feast of the Tabernacles at least once every seven years. 2020 is seven years later from 2013.

Therefore, at ALL CCOG FEAST OF TABERNACLES’ SITES where there will be live sermons, the entire Book of Deuteronomy is to be read and explained. To assist those who will be speaking, here is a link to my updated notes from 2006: The Feast of Tabernacles: A Time to Learn the Law and here is a link that has the 2013 Book of the Law sermons online: Feast of Tabernacles’ Sites for 2020. Sermon speakers should watch those if possible.

For those sites without live sermon speakers, you are encouraged to watch the 2020 Book of the Law sermons that we expect to upload to the ContinuingCOG YouTube channel. For some others sites, we plan to send out DVDs from 2013.

In Kenya, Evangelist Evans Ochieng wrote to say that the government is limiting religious gatherings to 100 people. This will mean that 1) we are planning on having more sites in Kenya and 2) that some sites will have to have two sets of services each day. We also have multiple languages to consider.

Evangelist Ochieng sent some preliminary ideas for locations. He and I have been working out how to best do this as this is basically a last minute change and we have less than two months to get ready for this. We are looking to prayer, planning, and technology to assist in the process.

We have already had some similar size limits in Malawi and Mozambique and have gone to separate services where we have needed to. We are not yet sure about Ghana or Ethiopia or Haiti or India.

Currently, we think that the sites in North America, Asia, and the South Pacific are fine and will not require separate services each day. But the situations in those areas could change.

Because of government travel restrictions, we are looking at the possibility of a video site for the Feast of Tabernacles in Australia. This, if we can have it, will be fairly small–but we are currently looking into this as a possibility.

Anyway, irrespective of government limits (which we tolerate when not in conflict with scripture–as we must obey God rather than man–Acts 5:29), yes we intend to hold the Feast of Tabernacles at many sites around the world.

Dear pastor Bob,
Greetings from Kenya,rift valley.
We are well and going on well despite the pressure of the present time of the pandemic disease.
Brethren are well and going on with the church work of spreading the word of God to all people.
Currently we are going on with the church construction at chemamit local church despite all the challenges facing the church at the moment.Below is the construction of the church building at a new local church.
Any assistance is appreciated.
In regards,
Pastor William kirui. 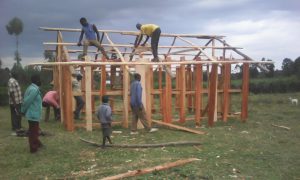 We mainly provided cement for the foundation and the local congregation provided the labor, land, and most of the other materials to make this building, which would be one intended to be used for regular Sabbath services as well as the Feast of Tabernacles.

The US continues to have destructive ‘protests’ and the city of Chicago just faced major looting (see ‘Looters, vandals sweep through Chicago’s Magnificent Mile after police shooting’).

Since the time of Margaret Thatcher, I have felt that it is likely that the USA would end up with a female president or at least a highly influential woman in a top level federal government job. As it turns out, the four remaining predominantly British-descended nations (the United Kingdom, Canada, Australia, and New Zealand) all have had not only queens (they shared the same ones), but all have already had a woman in the office of prime minister. The prime minister is the chief executive official in a parliamentary system of governance. So, Tuesday’s announcement by Joe Biden of his selection of Kamala Harris (see Joe Biden’s VP pick Kamala Harris poised to fulfill prophecy if elected) was consistent with that view.

Now, if Hosea 10:7-10 (which refers to Samaria, which prophetically points to the USA) has end time connotations (and part of it seems to, cf. Revelation 6:16), and presuming that the Hebrew word translated as ”king” literally means a male, then it would not seem to be possible that Kamala Harris could be the last President/leader of the United States–if she ever does hold that office–but we will see if she may hold it for a time.

Speaking of abortion, the US based Satanic Temple reportedly is raffling off a free abortion in its efforts to claim killing babies is a legitimate religious ritual (see ‘Satanic Temple Raffles Off Free Abortion to Promote Killing Babies as Religious Rituals’). This will not end well for the US.

It is reported that the latest deal by the European Union related to COVID spending will help lead to a superstate (see Ted Malloch: Globalism is the modern Tower of Babel). Such a state will form and be led by one the Bible calls the beast (Revelation 17:12-13). Europe is not there yet, but is getting closer to that time–yet it will need another major crisis to push it over to that–but such will occur relatively soon.

14 knowing that He who raised up the Lord Jesus will also raise us up with Jesus, and will present us with you. 15 For all things are for your sakes, that grace, having spread through the many, may cause thanksgiving to abound to the glory of God.

Brethren, yes, even if our physical lives are deteriorating, we should have hope.

The coming reward is eternal.