Although YouTube and its parent company Alphabet (AKA Google) continue to discourage people from finding our content, we still are reaching many through them.

We continue to get new YouTube subscribers to our videos. As of August 2, 2022, we had 3,141 subscribers on the ContinuingCOG channel–this has grown to 3,224 as of November 29, 2022. This is the channel that has our sermons, offertory messages, and some of our less prophetically-oriented sermonettes.

According to YouTube, subscribers watch more often than non-subscribers and our number of subscribers to these channels has continued to rise. Hence, our audience continues to expand–despite steps YouTube looks to have taken to slow the expansion.

As far as our Google campaigns go, we are doing very well. We have now reached over 449,155,667 impressions–and that is up over 43 million since August 2, 2022. That means computers (including ‘smart phones’) around the world have been reached over 449 million times with parts of the good news for those who put in various search terms.

In the past twelve months, we have made 144,256,667 computer/cellphone impressions, which is over 12 million per month! This is up from 100,691,681 impressions the previous 12 months. And, we were able to do this without increasing our spending for this, but by basically working with Google representatives to improve the reach of our campaigns.

It seems like never before in Church of God history have so few reached so many with so little resources. God has blessed the tithes and offerings we have received to give a witness to multiple millions around the world.

We have information on church history, the true Church of God, and God’s plan of salvation that we are promoting around the world through our Google campaign as part of the work we are doing to assist in fulfilling Matthew 24:14, Matthew 28:19-20, and Romans 11:25.

We also have a small campaign with Microsoft that targets and reaches Sabbath keepers–this has reached over 318,669 computers/cellular telephones around the world.

COGwriter News in the Spanish Language

We continues to get additional COGwriter materials translated into the Spanish language.

Here is what was received and posted on Tuesday:

Having articles, books, magazines, and videos in Spanish helps us reach many as Spanish is the fourth most spoken language in the world.

Food Projects in Malawi and Mozambique

A couple of years ago, we began some projects in Kenya, Malawi, and Mozambique to help members support themselves through raising chickens and selling their eggs. The following photo comes from one of those projects in the Rift Valley of Kenya. 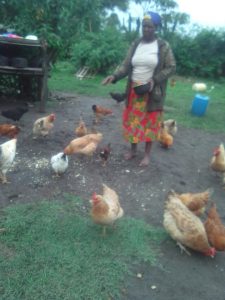 In response to an email from me, Malawi-based pastor Radson Mulozowa sent the following report:

Let me report that chicken project is going well in the following congregation namely
Njenjete
Migowi
Chileka
While in Mozambique there was a problem of the disease chicken pox so the leaders suggested to sell the remaining chicken and start goat project and the goat project is doing fine. Even during the feast they were able to slaughter some goats. The same in Malawi …
Best regards
Radson

We are glad that the chicken and goat projects are still helping our brethren in Africa.

Radson Mulozowa also mentioned two chicken projects in Malawi that failed, and that they were led by two men that had spiritual problems.

Evangelist Evans Ochieng just returned from an unannounced visit to Malawi. We decided that going unannounced would better help him investigate various complaints we have received related to leaders in Malawi. It is sad that we have people who claim to be of us, but then will not hold to the truth–and Evans Ochieng and others met and addressed issues with those two men (who were told they were no longer part of CCOG) and some others.

That said, we also provided assistance today to Mozambique so that they can buy fertilizer to raise more food. Fertilizer costs have risen related to Russia’s incursion into Ukraine and sanctions imposed because of that.

The US is concerned that Mexico is serious about stopping the importation of genetically-modified corn in 2024 (see BBC: Mexico’s planned GM corn ban ‘deep concern’ for US). Presuming Mexico holds to its plan, it will be similar to the European Union in this respect. The US is upset with both the EU and Mexico over this as the US wants to push GMOs (genetically-modified organisms) its agricultural segment produces.

It is also not just plants that the US is messing around with. The US Food and Drug Administration has given preliminary approval for what is called lab-grown chicken. This is not an actual chicken, but chicken muscle cells that are specially grown and then harvested. The recommended sermonette for this week is related to that–watch:  Lab grown chicken?

13 But evil men and impostors will grow worse and worse, deceiving and being deceived. (2 Timothy 3:13)

Not only is that the case related to aspects of the food supply, we are having various ones, including academics attempting to push the notion that Jesus supports the LGBTQ+ agenda as well as the lie that Jesus may have been a transgendered individual (see Yes, they are even pushing the lie that Jesus is transgender). We are also seeing more and more publicly discount the Bible (e.g. Non-religious grow in the UK and official has proclaimed that parts of the Bible are ‘no longer appropriate for modern society’).

And in the USA, its Senate approved a bill to enshrine homosexual marriage the law of the land (see Senate passes abomination bill–but God created marriage, not the state–more ‘gaslighting’).

We are getting closer to the end of the 6,000 God has allowed humanity to rule itself (for details, check out the article Does God Have a 6,000 Year Plan? What Year Does the 6,000 Years End?), and with such deceits being pushed by the world, it is little wonder that Jesus said no life would survive without God’s intervention (Matthew 24:21-22).

As Jesus said, pray for His kingdom to come (Matthew 6:10).Concluding Comments

The Apostle Paul told the evangelist Timothy the following:

20 O Timothy! Guard what was committed to your trust, avoiding the profane and idle babblings and contradictions of what is falsely called knowledge — 21 by professing it some have strayed concerning the faith.

Brethren, do not be deceived by so-called knowledge from sources that are in conflict with the word of God.

Believe God and live with the grace that God has given you.