This week, we lost a kind and hard working leader in the Continuing Church of God.

Received the following from the daughter of beloved CCOG deacon Richard Close:

Hello
We just received word from the hospital that dad died shortly after midnight. We appreciate your prayers on his behalf.
Elizabeth

This means he died on the Roman calendar date of January 3, 2022 in his time zone.

Richard Close was a long time member of the Church of God. He was ordained a deacon in 1989. He lived in Towanda, Pennsylvania.

Richard Close speaking at the Feast of Tabernacles in New Brunswick

Here is a biographical sketch from Richard Close about himself:

We were both drawn to what he had to say.  We had been living in Santa Ana , Calif. and attended  a Methodist Church and continued to do so when we got back to Pa.

The next time I heard HWA was on WWVA Wheeling ,W. VA. and continued to listen. Got literature and the 57 lesson Bible C.C.and soon I quit attending Methodist Church.  Wrote for a ministerial visit (1963 I think). Was visited in June 66 and was invited to services in Phila Pa., which was a  4 hours drive one way.

Attended my 1st Sabbath service the week before Passover 1967.  Skipped the next Sabbath because the meeting was going to be in NYC. also about 3 1/2 hours away. Went to Philadelphia the following week and have continued ever since.  Missing very, very few Sabbaths.

Occupation:  auto Mechanic  and later was in asbestos removal and re-insulation business. I retired after 19 years–went back and worked summers another 2 years.  Presently I am involved in logging and also during the winter months selling Wood Pellets and fire wood –retail.  I also have done carpentry work, plumbing repair, roofing/siding, equipment operator, truck driver (straight -dump—tractor trailer-(dump,flat-bed,and tanker ) fabricator/welder and some farming before going into  military where I was a radio-teletype operator.

I have attended UCG primarily since  post FT 1995 although I have firmly believed since leaving WCG that, as Mr. Armstrong taught—the physical corporation is not the body of Christ–the body of Christ is a spiritual entity, and as such is not separated by man’s physical corporate divisions. In 2015, I noticed enough about the Continuing Church of God to get me to attend its Feast of Tabernacles’ site in Niagara Falls, Ontario, Canada, in 2015. After attending, I decided this is where God wanted me to mainly serve.

Colleen and I have 6 children—3 boys and 3 girls,plus – grand- children and great grand children,counting  inlaws etc  I think 59 total.  My wife said this morning ” some thing will have to go” if I am on the road a lot.  I told her that if this is what God  wants me to do–He will provide.

Richard Close became part of the Continuing Church of God in 2015. Our family first met him at the Feast of Tabernacles in 2015 in Canada.

We worked together on many matters since then. He was also easy to work with and we worked on doctrinal, counseling, and many other church matters together over the years.

One project he and I worked on together was to collect scriptures related to Satan’s fate. Last March, we put up the following sermon from him:

Is Satan immortal? Does he have eternal life? Or will he perish? Will you believe what the Bible says about this? Richard Close examines many scriptures indicating that Satan’s final fate has been revealed.

Here is a link to the sermon: Destiny of Satan.

Richard Close gave numerous sermons at CCOG festival sites in the USA and Canada. He was the major sermon speaker for the Feast of Tabernacles in Canada for 2021.

Richard Close had been the main leader to do counseling and baptisms for the CCOG in the USA and Canada.

Here are a couple on unsolicited statements from prospective CCOG members Richard counseled with:

I am very saddened to hear of Richard’s passing. He was always very kind and considerate to me in my questions about the Gospel, CCOG, and other matters.

I look forward to meeting him in person in God’s Kingdom!

My condolences to Richard’s Family, Elizabeth, and their Children!

Good morning Dr. Bob Thiel; first, I wanted to say I’m deeply sad of the passing of Mr. Close, I understand that for now he is just asleep awaiting the resurrection but in my 2 years of knowing him I had grown close and admired him with what he had told me of his life and I will very much miss him until that day comes. He was a great man and I enjoyed his conversations immensely whenever we could communicate; whether though a phone call or back and forth emails. He taught me a lot and I’m grateful for the knowledge he has passed on to me. …

Thank you so much for your time and once more I’m terribly sorry for his passing but I at least know a deeper joy because I will one day speak to him again.

Richard Close will be sorely missed.

CCOG elder George ‘Doc’ Buchanan has been providing counseling etc. and is striving to take on several of Richard Close’s duties for the church.

37 “The harvest truly is plentiful, but the laborers are few. 38 Therefore pray the Lord of the harvest to send out laborers into His harvest.” (Matthew 9:37-38)

Yes, we need to pray for more laborers for the harvest.

CCOG evangelist Evans Ochieng requests prayers for his son Bradox who is ill. Bradox was a minister in a different COG before he came with CCOG several years ago.

Let me thank you for the support you towards my car {repair} may God bless you since I was able to visit a new congregation called Likuwa.
During my visit I was able to share with them the lesson you sent on letter to the brethren about Fiery trials are necessary written by Raymond McNair.
I translated into chichewa so that many can know this truth. They were very happy to get this lesson as many things are happening in our country eg covid mandatory, price of things have gone up in the way that many brethren are failing to buy their needs, the rain is not coming, limited number of gathering, hunger, lack of medicine in hospital, riots and demonstration many hard times are happening
This coming Sabbath am visiting chiringa congregation
Pastor pray for the work both Malawi and Mozambique since God is opening more doors.
Attached is the picture of the new congregation is
Best regards 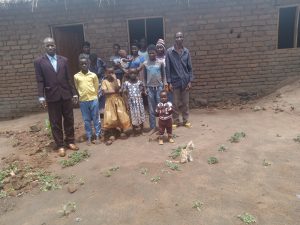 It is always great when we get new congregations, even small ones such as Lukawa, Malawi.

As a reminder, if you send an email and want something mailed to you or leave us a telephone message and want to be called back, please include your mailing address if you want something mailed (literature, anointed cloths, etc.) or your telephone number if you wish to be called back, even if you think we have it. We do not always have access to our computer files at all times, so even if you think we have your information, we may not have access to it.

While most of you have been doing this since we first asked, some seem to have forgotten. Anyway, including contact information helps us contact you better.

There are still concerns about the British exit from the European Union (see One year on, what’s next for Brexit?’). As bad as some view Brexit, it will ultimately be worse for the UK than almost everyone there imagines (cf. Daniel 8:24-25; Isaiah 17:3).

The European Union wants to be a major global player, but some believe it will need to make certain decisions and/or reorganize to do that (see CNN: 2022 could be a make-or-break year for Europe).The biblical reality is that Europe will reorganize (Revelation 17:12-13), but at least part of that reorganization is at least three years away. Yet, steps for Europe to become the prophesied end time Beast power are in process.

US President Biden spoke today about the protest a year ago in Washington, D.C. The USA is more and more divided (see Biden speaks about January 6th: A house divided? Civil war?). Increased division will not end well for the USA (cf. Jesus’ words in Matthew 12:25).

In the USA and much of the world, COVID cases have risen to record levels (see CNN: The Covid-19 case surge is altering daily life across the US. Things will likely get worse, experts warn). France’s President wants to further pressure the unvaccinated and US Dr. Fauci wants more vaccinations to be considered ‘fully vaccinated’ (see France’s Macron pushes against the unvaccinated; Fauci changes his definition of ‘fully vaccinated’). As a scientist, it has long been my position that much of the world mishandled COVID-19 and many governments are still mishandling it. Instead of pushing fear, censorship, lockdowns, and placing trust in the pharmaceutical industry, promoting immune health and encouraging the scientific discussion of treatments, etc. should have been done.

For two years now, we keep hearing about the novel coronavirus that the World Health Organization declared should be called COVID-19.

Let me remind everyone that the Bible says to “eat that which is good” (Isaiah 55:2) and “love your neighbor as yourself” (Matthew 12:31)–following that advice would have prevented this pandemic in the first place.

Brethren, that is still good advice for all of us.