Dear Brethren and Co-Workers in Christ:r

Who Gave the World the Bible?

We were finally able to mail out a draft of our latest printed book, Who Gave the World the Bible? The Canon: Why do we have the books we now do in the Bible? Is the Bible complete?, to our supporters in the USA. 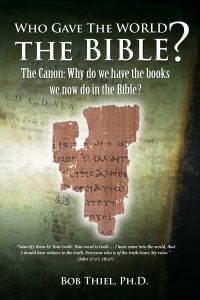 I am calling it a draft as it does not have the name of the book on its spine, and it is thick enough to do so. So, future editions will have that.

There really is no similar detailed book out like it and it is one step in our preparation for the short work (Romans 9:28) in the final phase of the work.

We also sent out donation receipts to our USA donors.

We are moving forward to prepare to instruct many (Daniel 11:33) in the end times.

Greetings from kenya.
I had a long journey in rift valley. I met chilani congregation and other leaders at chilani Hall. The meeting was so wonderful and it was good.  Our  representative from Njoro David cheriot also came.  I was happy to meet a big group of 153 people including children and youths. I also met our representative from kaplicho Mr Nelson and our representative from  Daktech.  Then  after the meeting I went to meet a new group at murkan from seventh day church of God who have been reading our books. The group was very happy to meet me and they wanted my promise to meet them again. I told them that I Will meet them after coming back from Malawi and Mozambique. They were very happy with the programmes of continuing church of God and the way how  work is done. They also apriciate your sermons which some of them they get. GOD has opened the door in kenya so much. The work in CCOG is expanding day by day. This month I had been so busy visiting the congregations in kenya and co-workers. But the congregations in kenya are so many that I cannot finish the visitation with in one month.  I tried my best but it was impossible.

After meeting our brethren in rift valley, I came to meet our congregation in kisii where a lady died when giving birth.  It was so sad.  We are planning the burial this week.  She left the baby and it was taken to the hospital. …

Another thing we  are supposed to plaster the floor of kaplecho and Daktech hall meetings. Also there is a new congregations that needed our help to build the hall. So I told them to wait and see if we can give them the iron sheets. We also need to plaster the floor of muhuru congregation and the rainfall weakened the Giribe hall that needs a New building. So the work in kenya is so big.
Here is a picture of chilani meeting yesterday.
Evans. 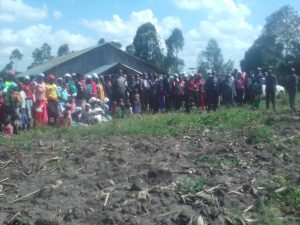 REPORT FROM RIFT VALLEY REGION
Receive greetings from Rift Congregations in Rift Valley region.
We thanked the visitation of Evangelist Evans Ochieng, his daughter and his son (driver) who visited the church at Chilani. His coming was because he had heard that Pastor sawek was sick. Pastor sawek had suffered pneumonia due to bad weather and the uncemented floor of his house. The soil in his area is clay (black cotton soil) and during heavy rainfall it becomes water locked hence making even floors of most houses become wet. We thanked Almighty God because when Evangelist Ochieng came, he was well. He urged the members to pray so that in future we build good houses and even build permanent buildings in church because Chilani is the headquarter of Riftvalley Region.
Evangelist Ochieng witnessed that CCOG members have increased tremendously in Riftvalley especially South Rift because of the hard work of pastor sawek and more so translation of CCOG books into local language.
Evangelist Ochieng was really happy to hear that one book has been fully translated (The book is entitled “should we keep God’s holidays or demonic holidays”). Five appointed men confirmed to Evangelist Ochieng that the book was well translated.
The coming of Evangelist Ochieng was really wonderful. The way he preached was actually moving. He preached without resting for three good hours. He taught about changing from old to new being (immortal beings).
He also taught the congregation to hold the teaching of CCOG and not Sunday teachings. Members present in that meeting were about four hundred (400).
When the meeting ended, we went to have a meal at pastor sawek home. Thereafter Evangelist Ochieng went through the road he was coming from and on the way members from a congregation at Murkan (Kilgoris) stopped him to have a talk. Pastor Ochieng promised them that when he came back from Malawi he would visit them. The congregation here are Kipsigis and maasai.
During the meeting we were with elder David Cheruiyot of North Rift. He also gave his report about the congregation in North Rift. Elder David also is a serious hard working man in the ministry of God. Pastor Ochieng promised him something. Members were happy about his promise. He did not forget to mention something about pastors and deacons. We pray for them so that they also get what they would use to help themselves in their hard work.
We also mention feast of tabernacles sites as (1) Chilani, (2) Takitech (3)Bomet, (4) Mau, (5)Njoro, (6) molo. In this meeting we were with representatives from South Rift and elders.
Women from the South Rift Region thanked Terry Nelson for the chicken project. The project has really helped them to visit the old, orphans and the sick. They request that they need to be supported with more chicken construction and fence.
May Almighty God bless you all.
Regards,
Pastor Sawek

Yes, we have had growth in the Rift Valley of Kenya. Also, if we have 6 Feast of Tabernacles’ sites there, that will be a record. In addition to those in Rift Valley, we expect to have probably at least three more sites in Kenya in 2021.

Deacon Ondigo Ochieng (who is not a relative of Evans Ochieng) posted the following:

Greetings friends around Migori and Kehancha.Am inviting all to tune to Radio Togotane FM at 9:45 pm to 10:15 pm Sunday 30 th May 2021, just a day to go,and be blessed with the Gospel of the Kingdom of God.Will be hosted by Mr.Hezron Marwa (Mwanafunzi wa Yesu).Welcome all wherever you are and may God bless you with His powerful message!

We have been on radio across the USA and sometimes in Africa. It is a door (Revelation 3:7-8) that has often been opened for the CCOG.

Last week, Joanna Kersten sent in a prayer request for her father. Below is an update she sent:

Update on Dad …
Dad was able to go home on Friday evening and will return to the hospital on June 11th to visit the cardiologists again.
He will do an ECG before and then meet the specialist.
He was also given some medication to help with severe fluid retention, however he is not seeing much results.
We believe he will probably need to have a heart valve replacement which he was hoping to avoid.
However at home now, he is very weak and tired. Due to the fluid in his longs he is struggling to sleep and is not able to do regular activities.
He isn’t having a good time, however we have been speaking about rejoicing in our trials and he believes God takes care of things in the right time and order.
He asked that he please send his thank you’s to everyone around the world who keeps him in their prayers.
Thank you to all those who have sent me messages and asked for updates. It is truly appreciated. I do feel very blessed that even for myself just being concerned; we have been given the knowledge and connection to call on each other for the prayers of those called in this time.
Joanna

There were a couple more mass shootings in the USA over the past couple of weeks (see CBS: Two people dead and over 20 injured in shooting outside Florida concert, LAT: 9 died from San Jose rail yard shooting). Sadly, they seem to be more and more common. They seem to be consistent with a last days’ prophecy about men being lovers of themselves and brutal (2 Timothy 3:1-4). It is also consistent with the fact that more and more Americans have gone further away from belief in God (see ‘US millennials seem likely to seek non-Bible world; believe in horoscopes rather than God: Survey’).

The People’s Republic of China announced that couples are now allowed to have three children (see VOA: China, in Major Policy Shift, Announces Families Can Have Three Children; COGwriter: 200,000,000 Man Army Will Still Form). For a long while, China only allowed one child, and this resulted in a gender imbalance of substantially more males than females. Such an imbalance may be a factor in the coming 200,000,000 man army of Revelation 9:16.

Yesterday, there was a report of Iran losing its largest naval ship as well as a report that Iran could ‘soon’ hit the USA will an electromagnetic pulse weapon (see Iran loses largest warship–could Iran soon damage the USA with an EMP weapon?). While I do not expect that a massive EMP will be successfully used soon by Iran against the USA, such an attack in the future is not out of the question. The USA could be hurt more by this than most Americans believe.

Late yesterday, a tentative deal of coalition government that would replace Israeli Prime Minister Benjamin Netanyahu was announced (see ‘Israeli Politicians Form Fragile Coalition to Unseat Netanyahu’). This proposed coalition government includes an Arabic party, which could make it quite fragile in the case of armed conflict. That being said, the time will come when Israeli politicians will likely be involved in forming a future coalition government that will allow regular animal sacrifices–as outrageous as that may seem to the world, those of us who believe the Bible realize that regular animal sacrifices will be resumed and then stopped (cf. Daniel 9:27, 11:31, 12:11). While we are NOT there yet, we are getting closer to that time.

Brethren, try to strive to always do so.