Much is going on in various parts of the world.

Dear Dr Bob,
Thanks for making it possible for Pastor Evans to visit Malawi and Mozambique. Really the trip was good. He was able to visit the following places one by one:
NJENJETE
MIGOWI
GUNDA
WILLIE
SUNUZI
PHALONI
CHIRINGA
while in Mozambique he visited:
DOMASI
NAGWAGWA
CHINDOLA
He failed to visit other places, though the brethren were gathered waiting for us, because of the roads were not good we failed to reach them. So he has promised to come again and visit the brethren. …
Among other subjects he talked with me how to conduct Passover and the neatness of the venue and order of everything. Since we will do Passover at sunset so we discuss of building something that will assist us on that day of events since the hall we are renting they cannot allow us to use it during sunset.
During his visit he brought two laptops one for me and another for Zambia.
We discuss of visiting a brother who come from mkwamba in Mozambique.
BAPTISM : Pastor Evans baptized 29 brethren both Malawi and Mozambique.
The gospel of the kingdom is being preached and many brethern are following the truth as it is.
Best Regards,
DEACON RADSON MULOZOWA

Here are a couple of photographs that we received: 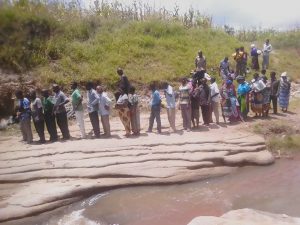 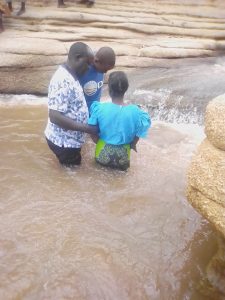 Since the last letter, I spent some time speaking separately to former presidents of the Denver, Colorado based Church of God (Seventh Day) Calvin Burrell and Robert Coulter.

I have known them both for years, though only met one of them personally.

We discussed matters of church history, doctrine, the age to come, and Africa.

One doctrinal point that came up was CG7 historian Robert Coulter mentioning that CG7 allowed alcohol consumption from the 19th century to the 20th century, but under A.N. Dugger it had been restricted for a time. Then CG7 allowed it until present.

Robert Coulter (who was based in Africa for years) specifically mentioned that Jesus’ first miracle was turning water into wine, that the Greek word for wine in the New Testament means wine and not grape juice, and that there is a different Greek word for grape juice. While I knew all of that, since we have people in Africa with a CG7 background, it seemed like this should be brought up here.

Anyway, one of the presidents was interested in a couple of our books, so I sent them to him. Plus there is interest in another book that I am not finished with. And it was that book (having to do with God’s plan to offer salvation to all that ever lived) which triggered my calls to them. One of them referred me to someone else at CG7 (since both of these former presidents are retired and no longer live in Colorado) to assist me with looking for certain historical documentation on that.

CG7 includes certain “age to come” teachings in part of its history, but later distanced itself from them. My hope and prayer is that more there will reconsider our truly biblical view on this matter.

Feast of Tabernacles in Canada

Herb Haddon informed me that he signed a contract for the 2019 Feast of Tabernacles site in Canada.

Here is the location.

The Feast of Tabernacles will begin at sunset October 13th and run through sunset, the Last Great Day, October 21st.

If you are planning on attending this year in St. Louis (and you do not have to stay at the Westin, although with the discount being offered many will), please send me an email. My email address is COGwriter@aol.com

If you are planning on attending this year in Montreal (and you do not have to stay at the Ramada), please send Herb Haddon an email. His email address is HWHaddon@gmail.com

As mentioned last week, we expect to have three sites on the continent of North America: St. Louis, Montreal, and possibly eastern Mexico.

For information on the Montreal site and the other expected festival sites for 2019, you can also check out the page: Continuing Church of God Feast of Tabernacles’ sites for 2019.

Within a few days of the official formation of the Continuing Church of God, we began to load videos on YouTube.

We have several channels we are using at YouTube currently:

As many of you are aware, YouTube pulled, without notice, a sermon message from Steve Dupuie a few years ago. It took some time, but I was able to persuade YouTube that it did not violate its “community standards.”

Since then, however, YouTube has without notice, shut down various channels, including some religiously-oriented ones (though none of ours).

While we cannot prevent the coming ‘famine of the word’ (Amos 8:11-12), we also know that Bible teaches:

3 A prudent man foresees evil and hides himself, But the simple pass on and are punished. (Proverbs 22:3)

16 Behold, I send you out as sheep in the midst of wolves. Therefore be wise as serpents and harmless as doves. (Matthew 10:16)

We can see problems coming in the future, and wish to take wise steps.

Therefore, last month I asked Bill Wedekind if he would start to upload our BibleNewsProphecy videos on to another platform called Vimeo.

We chose Vimeo for a few reasons:

As far as costs go, I chose the lowest cost option that seemed to possibly work for us. But it has limitations as to how many videos we can load per week.

Bill Wedekind started doing the uploads a couple of weeks or so ago, and we expect to have over 100 sermonette videos there by the end of this week.

However, since we have almost 300 BibleNewsProphecy videos on YouTube, and I asked Bill Wedekind to start uploading from the oldest, it will take some time for all of them to be up. It will not be until the Spring that our most recent ones are expected to be up.

Now, we are NOT planning on dropping YouTube as we believe it gives us the best access and exposure for our videos. A recent video we put out–Pope Francis signs ‘one world religion’ document!–has had over 41,000 views in the past few weeks. Part of that success is because of the reach and familiarity that people around the world have with YouTube. That particular video also seems to have resulted in a 20% increase in subscribers to our BibleNewsProphecy YouTube channel. We gained more subscribers in the past several weeks than we have averaged in a typical year!

Yet, because YouTube has said that it wants to make it hard for people to find videos it considers promote “conspiracy theories” –even when they do not violate YouTube’s “community standards” (see Letter to the Brethren: January 31, 2019), YouTube remains a concern to us for many reasons.

One of which includes the fact that YouTube put a warning on one of our sermons last year (see Freemasonry, Armageddon, and Rome). Another is that we teach doctrines like the “millennium,” “the coming Beast,” “666,” and “one world religion” which either are (as far as YouTube is concerned), or could be considered to be, conspiracy theories. As a church, we do not wish to be entirely at the mercy of YouTube’s censors.

This does not mean that Vimeo holds to our views either, but being there already may help if YouTube pulls our BNP channel and makes it unavailable in the future.

We are also considering the possibility of other Vimeo channels, but since they (for our needs) are not free (and no, they are not expensive either) we plan to wait and see how this one channel goes with them for a while.

Anyway, our Vimeo channel is at the following link: https://vimeo.com/channels/biblenewsprophecy

Oscar Mediavilla has had health problems for years, and died earlier this week. The funeral is planned for March 13th. Jay Chiang is planning on attending and conducting the service.

Oscar Mediavilla was a CCOG pioneer, being the first in the Philippines to become part of the Continuing Church of God.

Please pray that God will provide comfort to his family during their time of grief.

Some have been posting that Canada is looking at tracking people’s ‘negative behavior’ is a way that reminds various ones of China’s social credit scoring system (see Police in Canada Are Tracking People’s ‘Negative’ Behavior In a ‘Risk’ Database’ and US Post Office Spying On You). Various aspects of human privacy are being lost, and the West is providing technology and governmental support to do so. And we know that a totalitarian system will be put in place in Europe under the Beast (cf. Revelation 13).

The US Department of Health and Human Services put forth an extension for its contract for researchers to make “humanized mice” with tissues from aborted human babies (HHS Extends Contract to Make ‘Humanized Mice’ With Aborted Baby Parts). Many of the world’s so-called scientists are getting sicker and sicker.

Outside the US, the BRICS nations (Brazil, Russia, India, China, and South Africa) are working on another way to bypass the US dollar for a small amount of their trade called “BRICS Pay” (see ‘BRICS Pay’ and the Coming End of US Dollar Hegemony). While BRICS Pay is not enough to topple the US dollar, as more and more nations look for a while to bypass the dollar, they will conclude in the future that its time is done. That will not bode well for the US.

14 Righteousness and justice are the foundation of Your throne;
Mercy and truth go before Your face.
15 Blessed are the people who know the joyful sound!
They walk, O Lord, in the light of Your countenance.
16 In Your name they rejoice all day long,
And in Your righteousness they are exalted.
17 For You are the glory of their strength,
And in Your favor our horn is exalted. (Psalm 89:14-17)

Brethren, God’s ways are righteous, merciful, and just, and based on truth.

Let us rejoice knowing that and walk in His light.