We hope and pray you are growing in grace and knowledge.

Because of the nature of the recommended sermon for the week (Abortion and Birth Control: History and Scriptures), parents may wish to use their discretion on whether they want their children to watch that sermon or a different one.

Deacon Koang Deng told me that they had put up a sign in front of the building where they meet in Gambella, Ethiopia. So, I asked him if he could send a picture of it. So he did: 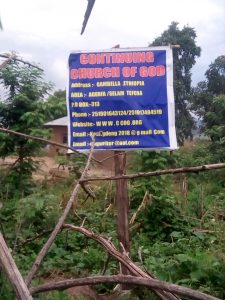 The building they meet in is in the background behind the sign.

Deacon Deng said that he hopes that the sign will help reach others who may be interested in attending. 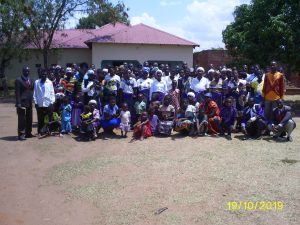 Let me thank God for the support you gave me during the feast of Tabernacle and the funeral of brother gonakumoto.
May God bless you.
The feast went well this year in the way that we were blessed with the teachings and am receiving testimony.
We had brethren from mwanza, muguliwa and kachingwe who come to the feast for the first time to attend.

Justine Gonakumoto was our congregation leader in Zambia.

Greetings in the name of Christ. We thank you for your prayers. I travelled safely to Kiromwok, Bomet County and the Brethren received me, They are grateful for the Iron sheets which we donated with Evangelist Ochieng and they are happy. They are also praying for us in the ministry. During the sabbath I was given the opportunity to minister to them for two hours , I also took half an hour to teach the children in which all of them were taught to follow the ten commandments and acknowledge that all were given to us from the Lord. They requested me to visit them once again the soonest since we are having new brothers and sisters joining the ministry. The building is ongoing and they have brought the stones for the floor and they are expecting the cement which were promised. They request for History books on continuing church of God. I had told Evangelist Ochieng and  I believe we shall get as soon as possible. I returned to Litein, Bureti, some few kilometers from Kericho Town and i was received well, I will stay there till this coming Tuesday in which I will go to Chebirbelek so that we meet with our Brothers from there. We are still meeting with some brothers some of whom we have met before, others new to me. We request for your prayers in this journey. I have sent you photos from Bomet Kiromwok Church.
God bless you 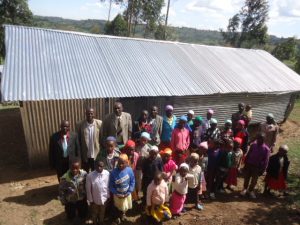 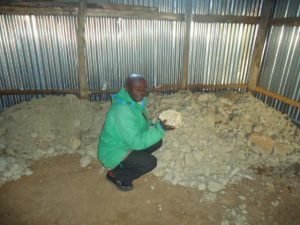 Receive greetings in Jesus Christ. I’m happy for your prayers,the teachings went on very well and I arrive safely though had experience cold and coughing but I’m well all the same, we didn’t had safe accommodation unlike the experience journey together with Evangelist Ochieng which usually have good accommodation.
Today I receive a report from the Maasai land community, as they expect us by next week. I believe everything will goes on well, I will inform Evangelist Ochieng so as we make arrangements about the same . The youth also are preparing for December youth camp this year and we seek for your prayers for the same. God bless you.
Regards,
Pastor Sawek

Elsewhere related to Kenya, Evangelist Evans Ochieng sent an email where he mentioned that they are planning on having a 5 day youth camp in Kenya starting December 16th.

Note to ALL 2020 Feast of Tabernacles Sermon Speakers

The Bible teaches the following:

10 …”At the end of every seven years, at the appointed time in the year of release, at the Feast of Tabernacles, 11 when all Israel comes to appear before the Lord your God in the place which He chooses, you shall read this law before all Israel in their hearing. 12 Gather the people together, men and women and little ones, and the stranger who is within your gates, that they may hear and that they may learn to fear the Lord your God and carefully observe all the words of this law, 13 and that their children, who have not known it, may hear and learn to fear the Lord your God as long as you live in the land which you cross the Jordan to possess.” (Deuteronomy 31:10-13).

As many of you know, we in the CCOG abide by this. This reading of the law was done by me at the two actual Feast of Tabernacles’ sites we had in 2013.

Seven years from 2013, is 2020. Therefore, in order to be in compliance with Deuteronomy 31:10-11, sermon speakers must cover the entire Book of Deuteronomy (meaning reading every verse, and making comments as appropriate) at every live Feast of Tabernacles’ site (the sites that are not “live” should be watching a series I intend to do and upload during the Feast–or if that is not possible, the series that was done in 2013).

Yes, this is very advanced notice, but this seemed as good of time as any to send out an early reminder.

European military development has been in news (see France’s ‘Macron marks Armistice Day’ and ‘Europe wants its own Army’, Germans still want NATO, but also want European military, and France’s Macron uncertain about NATO and USA has concerns about PESCO). Brexit and US President Donald Trump have been credited for it (see European army? EU chief Von der Leyen says bloc must ‘flex its muscles’ and ‘Brexit has strengthened our unity’).

The USA has basically been credited for motivating the Gentile BRICS nations (Brazil, Russia, China, India, and South Africa) to get together as they work on their agenda to push aside the US dollar domination. The BRICS have meetings this week about that and other aspects of their plan to increase their influence (e.g., see BRICS: Gentiles plan to break Ango-American dominance).

In Vatican City, Pope Francis continues to make ecumenical and interfaith moves and changes that have concerned many Catholics (see CNA: Theology in ‘dialogue with cultures’ renews humanity, Pope Francis says and ‘Cardinal Burke: Pope would be leading a schism if he endorsed errors in Amazon Synod working doc ‘). While Europe is nonreligious in many ways, look for it to arm as well as fall for a changed version of Catholicism (see also PESCO adding more military projects, while Poles want EU to also have protection from Mary).

Speaking of the Pope, he along with the United Nations would like the UK to give up its Chagos island territories (see ‘Pressure Grows on Britain to Return Its Last African Colony’ and Pope Francis is supportive of that pressure). Ultimately, the UK will lose that as well as the Falkland Islands, Gibraltar, Northern Ireland, and even England consistent with Deuteronomy 28:63 (see also Will the UK Lose Gibraltar, the Chagos Islands, and the Falkland Islands?).

Over in the Middle East, an Islamic group has threatened to attack Jerusalem (see ‘After Bombarding Tel Aviv, Islamic Jihad Now Threatens to Attack Jerusalem’). The Bible shows that God will remove His protection from Israel (Judea) and that the damage that will hit Jerusalem will be great (Isaiah 22:8-9). Now the prophecy in Isaiah 22 seems to involve people from Iran and Syria. It may well be that those in Gaza will align themselves with them against the nation of Israel. So, Islamic Jihad may be making more than an idle threat. There was a ‘cease fire’ agreed to today, but one report I saw said it was violated within hours. The Bible says to pray for the peace of Jerusalem (Psalm 122:6), although true peace will not come until after the return of Jesus Christ and the establishment of the Kingdom of God.

We expect to see some type of a regional war in the Middle East before the ‘peace deal’ of Daniel 9:26-27 is confirmed.

The Apostle Paul admonished the following:

1 I beseech you therefore, brethren, by the mercies of God, that you present your bodies a living sacrifice, holy, acceptable to God, which is your reasonable service. 2 And do not be conformed to this world, but be transformed by the renewing of your mind, that you may prove what is that good and acceptable and perfect will of God. (Romans 12:1-2)

Brethren, we are not to be conformed to this world and its ways, but we are to be transformed by God’s calling and the character building challenges and opportunities we face in this life.