We hope and pray that you had a spiritually rewarding and uplifting week.

We received a couple of report from Shirley Gestro (Hickey) in New Zealand related to the Bible News Prophecy online radio station she has overseen setting up:

I changed the radio url (link to radio mobile on this website) to: http://www.biblenewsprophecy.net/

Reason for this change is to improve the management of it:  It now streams 24/7 on auto dj uninterrupted without global shutdowns, unlimited listeners & unmetered bandwidth, comprehensive streaming radio statistics system and live real time listener analysis,

I do not to need to keep my computer on for it to stream, it runs better and faster for poorer connections. …

On the former radio page (biblenewsprophecy.caster.fm) there is a display up to inform people of the new radio url and also click on links to the page.

To go to the new page (and see the new layout) click on the URL: http://www.biblenewsprophecy.net/

On a related note, Jay Chiang of China told me that he has recorded a couple of messages for the radio station.  Thus, giving some variety in the speakers there.

Study the Bible Course- A test is coming!

Spent a little time finishing up matters related to a test for the Study the Bible Course.  Because of lack of staff, I decided against having a test that students would submit to be graded.  So, any of you worried about how you might do, relax as you get to grade yourself.

On related matters, I spent a lot of time working on the Study the Bible Course lesson that comes after the test.  Putting together the Study the Bible Course takes more time than it would seem since it is based on a previous course.  That being said, in time I believe it will be valuable to our prospective members as it has more and more useful information with each lesson we complete.

The graphics company finalized our last booklet in the Spanish language, and I was able to upload it. 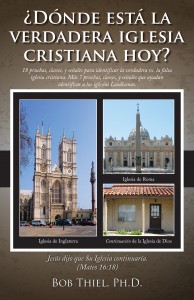 So, now all three of our booklets have been translated into the Spanish language:

We have a lot of information in the Spanish language and are reaching more people with of materials in it.  But we still have a ways to go.  We also are hopeful to get our booklets in other languages.

Speaking of booklets, I am working on two more that I expect will be out before too late in 2015.

Here are some additional news items translated into the Spanish language:

The Somalia-based terrorist group al-Shabaab has killed again in Kenya.  28 non-Muslims were killed by these Islamic terrorists (see al-Shabab kills 28 non-Muslims in Kenya).

While I was in Nairobi, Kenya last March/April, al-Shabaab committed a terrorist act there and several were killed.  From a Church of God perspective, al-Shabaab creates difficulties in Kenya as it has heightened security and safety concerns in Kenya.  While I am not aware that the Continuing Church of God (CCOG) had any members directly affected by this latest bombing, we do have hundreds of members in Kenya, as well as members in neighboring Tanzania.  The problems caused by al-Shabaab were factors in interfering with the travel of CCOG members into Kenya for the Feast of Tabernacles last month.  Because of that, most from Tanzania had to stay in that country and a last minute Feast site over there had to be arranged.  We need God’s kingdom to come–pray for that (Matthew 6:10).

Election results in the United Kingdom (UK) showed an important gain for Nigel Farage’s United Kingdom Independence Party (UKIP; see Farage’s anti-EU party gets a big win in UK and eyes more in May).  Nigel Farage wants the UK out of the European Union (EU) and has made many disparaging and insulting comments about leaders in the European Union.  While many in the UK are getting fed up with the EU, many in the EU are getting fed up with the UK.  This ultimately will not turn out well for either of them, with the UK suffering the most first (Jeremiah 30:7).

Brethren, all God’s “commandments are righteousness” (Psalm 119:172).  God’s people will be keeping those commandments until the end (Revelation 14:12), and that is one way to identify true Christians at the end.