We hope and pray you have been able to build godly character this past week.

Last Thursday/Friday, CCOG evangelist Evans Ochieng went to Nairobi (in Kenya) to pick up newly printed copies of the books Continuing History of the Church of God and Hope of Salvation: How the Continuing Church of God Differs from Protestantism. He was excited to do so as he felt both of them would help us have a great impact in Africa.

About that same time, some false witness contacted the anti-Church of God website called ‘Banned by HWA’ to spread lies about him. The main lie was that evangelist Ochieng is now working for three other COGs, besides the CCOG. Since I personally had spoken to leaders of two of those three in 2013/2014 and had emails from the other in early 2014, I knew that these assertions were lies. Another lie was that Evans Ochieng’s prior COG did not know until the Spring of 2014 that he was coming with CCOG–that was a lie as I personally contacted the leader of his prior COG association and told him what was happening in November 2013. Despite the reports being false, Banned by HWA posted both of them anyway–nor did they retract them later once the webmaster there read that truth.

Since it seemed like evangelist Evans Ochieng probably would like to have known about them, I forwarded those two Banned by HWA posts to him last Friday and wrote:

You do not need to respond, but I thought I would let you know. They lie all the time there.

He did respond to me with the following the next day:

Thank you very much for forwarding to me all this lies. Those are dying horses. They do all these because they fear the speed with which the continuing church of God is growing in Africa. And the speed of the continuing church of God is doing the work worldwide. And how God is using you in the end time move of preaching the gospel. The doors are open for CONTINUING CHURCH OF GOD to preach and reach many nations and to open the eyes of blinded nations so that they can be called in the truth and to be in the first resurrection. PRAISE THE ALMIGHTY FOR A WONDERFUL WORK. be a blessed pastor and continue to do good work. Those people fear me  because they know that I’m a true evangelist. and they know the kind of work God has done through my hands. I do pray for such people to repent and be humble to God so that we all meet our saviour and king Jesus Christ.

Yes, Evans Ochieng is functioning as a true evangelist and this grates on those who do not have sufficient love of the truth.

10 Blessed are those who are persecuted for righteousness’ sake, For theirs is the kingdom of heaven. 11 Blessed are you when they revile and persecute you, and say all kinds of evil against you falsely for My sake. 12 Rejoice and be exceedingly glad, for great is your reward in heaven, for so they persecuted the prophets who were before you (Matthew 5:10-12)

Those at Banned by HWA and various other places have regularly been fulfilling that prophecy as they have been saying all kinds of things falsely against me, Evans Ochieng, and the CCOG.

So, yes, we are seeing that prophecy fulfilled.

The recommended sermonette for this Sabbath is related to what happened and is titled: Dispelling Lies About Evangelist Evans Ochieng.

Let me report that the feast went well with a lot of testimonies.
All the sites everything went well though on the last day one was involved in an accident when going back home and we had to take him to hospital for treatment. She broke her arm but now he is improving.
I have delayed my report due to network upgrade in our country.
Best regards
Radson 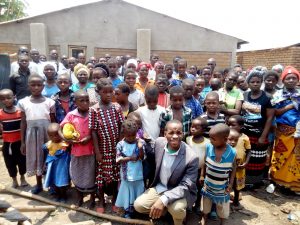 Glad it basically went well. You may wish to pray for the woman whose arm was broken.

Overseer Samuel Ofosu sent the following photograph of some women at the Feast of Tabernacles as well as more information on that festival from Ghana: 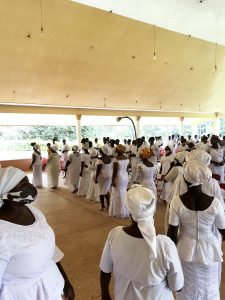 Regards to you, Pastor Bob Thiel and the beloved brethren here in our Lord Jesus Christ, as we update you.

This year’s Kingdom Feast as titled would be remembered undoubtedly as one of the greatest basically not on humanitarian exception, but rather with the “FAITH” that had been ATTACHED to CELEBRATING it amidst the catastrophic COVID-19 Pandemic, when hope nearly dwindled for socio-economic and health reasons as strictly outlined and enforced by various Countries.

The brethren in Ghana had already determined to honor the Feast with slim chances though, and news about the ease in the COVID-19 Pandemic protocol restrictions brought us another good news with a timely simultaneous support from Dr. Pastor Bob Thiel for the Feast as we thankfully acknowledge him for that generosity.

Attendance was generally overwhelming though not absolute, with peaceful committed conducts and ecstatic daily involvement devotional Services with no major casualties except for minor fevers.

..”Confirming the disciples hearts and exhorting them to continue in the FAITH, affirming that we must through many afflictions enter into the KINGDOM OF GOD.”[Acts 14:22, Geneva Version]

On the theme, we prominently admonished the brethren to imitate the example of the faithful Patriarchs and Apostles who for the sake of the KINGDOM PROMISES sacrificed their blood and some even their lives for the sake of the Gospel and the elect and considered themselves unworthy.

..”Let us hold unswervingly to the hope we profess, for He who PROMISED is FAITHFUL.”[Hebrews 10:23, NIV].

God has never disappointed nor failed in His promises and His Promise of SALVATION shall surely come to pass and we can’t forgive ourselves to miss out in the coming Kingdom if we stubbornly stiffed-neck fail to heed God’s call to TRUE REPENTANCE as in His PERMISSIVE-Will, so that we can be SAVED through OBEDIENT and RIGHTEOUS LIVING with the GIFT of ETERNAL SALVATION as in His PERFECT-Will for which we’re called and laboring in expectation.

Absolutely, what more could we’ve asked from our Heavenly Father as we deemed it a blessed Feast because we ushered-in on the SABBATH and graced the LAST GREAT DAY on the SABBATH.

From various destinations, we’ve all reached home safely to a New Life, refreshed in the WORD supplanted in our souls for Spiritually edification in our Lord Jesus Christ.

As l send my regards to all the brethren in His Vineyard, l say bravo to Dr. Pastor Bob Thiel.

May the Almighty Creator bless us all and empower us to spread the Good News of the Kingdom of God.

To God be the Glory now forevermore,
AMEN..!!!

Yours in Christ,
Pastor Samuel
Ghana.

We are glad the festival happened despite COVID restrictions in Ghana.

And yes, we all should step out on faith and keep the Feast of Tabernacles which is what thousands of congregants in the CCOG did this year, and we expect to do so again in 2021.

Pope Francis has upset some Roman Catholics because parts of his latest encyclical, Fratelli tutti, had goals similar to the Freemasons–and yesterday it was reported he made statements in favor of homosexual civil unions (see Fratelli Tutti, the Beast, and Freemasonry). Although some Freemasons like what Pope Francis has stated on many topics, it is likely that the time will come when the Freemasons will support the destruction of the Church of Rome (cf. Revelation 17:16-18). Francis’ homosexual-agenda enabling comments remind me that our view that the Beast and the final Antichrist will teach against all of the Ten Commandments (see the free online book: The Ten Commandments: The Decalogue, Christianity, and the Beast) is correct.

As far as the USA presidential election goes, it is reported that Europeans would prefer Joe Biden to win (see ‘Who Is Europe Rooting For In The US Presidential Election?’ ‘US election 2020: Why it matters so much to Germans’).

While many in China apparently agree, some believe that the Chinese government would prefer to see Donald Trump elected as they seem to feel he would be more likely to reduce USA influence in the world (see ‘Who Is Europe Rooting For In The US Presidential Election?’ ‘US election 2020: Why it matters so much to Germans’).

Some European leaders reportedly wanted Donald Trump to win back in 2016 as they felt he would be an impetus for Europe to separate further from the USA, which has happened.

No matter who wins the USA presidential election, the world is changing. USA debt keeps increasing (see ‘A trillion here, a trillion there …’ ‘We Destroyed the World’s Greatest Economy for No Reason’), and the time is soon coming when the USA will not be the head, but will be the tail (cf. Deuteronomy 28:44)–and one day, relatively soon, be no more (cf. Daniel 11:39).

16 The sluggard is wiser in his own conceit than seven men that can render a reason. (Proverbs 26:16, KJV)

16 These six things the Lord hates, Yes, seven are an abomination to Him: 17 A proud look, A lying tongue, Hands that shed innocent blood, 18 A heart that devises wicked plans, Feet that are swift in running to evil, 19 A false witness who speaks lies, And one who sows discord among brethren. (Proverbs 6:16-19)

Brethren, do not be among those who sow discord by believing or promoting lies (Revelation 22:15).