Greetings again from Grover Beach in the ‘Five Cities’ region of California.

A busy week of trying to get used to our new location, while also planning for the Fall Holy Days, and working on proclaiming the gospel of the kingdom of God.

Received emails for the first time from a family in the Philippines that wants to be part of the Continuing Church of God and have a video site for the Feast of Tabernacles.  This family has a COG background.

Received an email from someone in Canada who expressed interest this week, but will not be financially able to attend the Feast of Tabernacles in Ontario this year.

Also received first time emails from a couple of others in the USA that expressed interest, but will not be financially able to attend the Feast of Tabernacles in Colorado this year.

Normally, I do not report about the scattered emails in this weekly letter, as this type of thing happens all the time.  But I thought that many of you would be interested in learning that yes, others are contacting us for the first time and expressing interest.

Just received several photographs of some of the meetings in Ghana two weeks ago from Ghanese Elder Osei Bonsu.  Here are two below:

Elder Bonsu did not provide any names with the photographs, but I recognized Pastors Owak and Ochieng as I have met them personally.  But I never have met any of the Ghanese, and hence have not provided names here.

We are trying to work with various ones around the world who claim COG doctrines and who have expressed interest with us, and that includes the group of about 500 people in Ghana.

The Fall Holy Day season for 2015 is about upon us.

If you have an interest in hosting either of those Holy Day services in your area this year, please let me know.  My email address is cogwriter@aol.com.

The Feast of Tabernacles in 2015 begins the evening of September 27th and runs until sunset October 5th.

If you are planning on attending in Denver and have not contacted me, please send me an email: cogwriter@aol.com.  If you are interested in possibly giving a sermonette, let me know as we have not finalized all the sermonette schedules yet for this site.

Here is the hotel link for the Continuing Church of God for the Holiday Inn, Stapleton/Denver. They are extending their ‘discounted rate’ for us to book until tomorrow, Friday, September 5, 2015.

If you are planning on attending in Niagara Falls and have not contacted Herb Haddon, please send him an email: hwhaddon@gmail.com.  I have been in contact with Herb Haddon and others regarding the speaking schedule for this site.

If you are planning on attending the Feast of Tabernacles’ site in New Zealand, contact John Hickey, email john.h@vodafone.net.nz; his mobile phone number is 021 519 441.

If you are planning on attending in Tanzania or Kenya or Nigeria or Ghana or elsewhere in Africa and you are not from Africa, please contact Pastor Evans Ochieng, email evochieng74@gmail.com.  We sent money to Kenya in order for them to be better prepare one of the locations there for the Feast of Tabernacles as well as to print literature later this month.  We also expect to send more later this month to help cover some of the transportation and other costs associated with the Feast of Tabernacles in certain parts of Africa.  However, we simply do not expect to have enough to send to cover all the needs and requests for Africa associated with the Feast of Tabernacles, but we try to do what we can.

If you hope to attend in the Philippines in the Silay City area, please contact Oscar Mediavilla via email hansmeidavilla@rocketmail.com.

Wikipedia says that “Cagayan de Oro is a first class highly urbanized and capital city of the province of Misamis Oriental in Mindanao” in the Philippines. A ‘DVD’ Feast of Tabernacles is now somewhat planned for there. This would be in a member’s home. This member is new to CCOG as of September 1, 2015.  For more details, contact Anthony Flavell via email anthonyflavell@yahoo.com.ph.

For more information of the various locations of the for 2015, including those in Africa & Asia, check out the updated article Feast of Tabernacles’ Sites for 2015.

As mentioned before, we have had our first item translated into the language of Ekegusii, also known as Kisii. 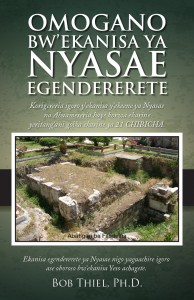 Ekegusii is mainly spoken in part of Kenya.  Sample booklets were just was printed in the USA as I picked them up yesterday.  The regular printing of them is expected to be done in Nairobi later this month.  Here is a link to it: Omogano Bw’ekanisa Ya Nyasae Egendererete.

We hope to have it in other languages as well in the future.

Many in the mainstream media were excited that Pope Francis is changing its rules about how it treats women who have had abortions (see Pope Francis temporarily to reduce his church’s penalty for abortion. Why is he coming to the USA this month?).  The pontiff is having a special dispensation during his upcoming ‘jubilee’ which is officially called:

BULL OF INDICTION
OF THE EXTRAORDINARY
JUBILEE OF MERCY

That ‘bull of indiction’ closes with an invocation to Pope Francis’ version of ‘Mary.’ I believe that most of what Pope Francis is doing, including his trip to the USA this month, is trying to promote his ecumenical and interfaith agenda which will lead to the final rise of Babylon (Revelation 17 &18).

The Protestant-leaning World News Daily continues to promote the idea that the next ‘blood moon’ (a particular type of lunar eclipse) has prophetic significance (see Jewish Rabbi claims blood moons mean ‘messianic advancement’).  While the next ‘blood moon’ is expected to be seen during the Feast of Tabernacles this month, it is NOT the prophesied blood moon that the Book of Revelation tells of, which is also accompanied by the sun turning black (Revelation 6:13).  The Bible simply does NOT put the importance on the lunar eclipses as some Protestants have put on them.

World News Daily also attempted to claim that recent stock market fluctuations are related to a claimed Jewish ‘Shemitah year’ (see WND headline ‘Statistician: Data proves biblical financial collapse’).  Some of the data it cited, however, does not support its conclusion.  Also, I am not convinced that we are in a biblical ‘Shemitah’ (Sabbatical) year hence also have discounted the claim.  It is not that the stock market may not go down this month, but I do not believe that the Bible is predicting this month’s stock market performance, like the World News Daily article has indicated.

Over in the Middle East, the USA was able to pressure Turkey to start to bomb the Islamic State.  However, the Turks also decided to bomb some Kurds (see Turkey bombs ISIS and Kurds–what was the USA thinking?).  While the Kurds have often been allies of the USA, Turkey considers them to be a threat.  This does not bode well in the long run for the USA.

Speaking of the USA and the Middle East, it remains my view that once Iran gets access to enough of its frozen assets, it is likely to take steps that more clearly will violate the nuclear deal and risk war.  Although the majority of US Senators do not favor the Iranian nuclear deal, enough of them have pledged to vote for it that the Senate is not expected to be able to stop it (see Obama seems to have secured enough Senate votes to get his Iranian deal ‘veto-proof’).  Iran is likely to be emboldened by the deal.

Russia’s President Putin has proposed a bill to stop the Commonwealth of Independent States (CIS) from using the US dollar or the euro in CIS trade.  While this action of itself is not huge, it is one more step towards dethroning the US dollar as the world’s primary reserve currency.  I also would add that if he has a choice, Russia’s Putin would support the euro if he felt it would dethrone the US dollar.  I expect Russia to make some type of deal with the Europeans in the future that will not be favorable towards the USA (or Canada).

Over in Europe, the British are looking at having an election on whether or not to remain part of the European Union (see Amendment proposed for UK referendum on the European Union; Does the Vatican have a plan?).  UK Prime Minister promised such a referendum if he was re-elected, and since he was, one is still planned.  It is currently expected in 2016 or 2017.  The time will come when the UK will not be an ‘equal member’ of the European Union and will be taken over by the final European Beast power.

If your internet connection is still too slow (as my home one is) and/or you prefer audio messages to audio-visuals ones, go to the YouTube link for the message, click on SHOW MORE related to the description. You will then see something that says, “Download MP3.” Below that is a link to an MP3 file. Most computers (and even some cellular telephones) will allow MP3 files to be downloaded and played. This is an option we have made available (but we are also looking into ways to improve that as well)–and, of course, we have written article options that we list each week. Some people have found that if their internet connections are not fast enough, that they can simply listen to the messages that are found at the new Bible News Prophecy online radio channel.

There are a lot of people that still need to be reached with the gospel of the kingdom.  Jesus understood that and gave a related instruction:

35 Then Jesus went about all the cities and villages, teaching in their synagogues, preaching the gospel of the kingdom, and healing every sickness and every disease among the people.  36 But when He saw the multitudes, He was moved with compassion for them, because they were weary and scattered, like sheep having no shepherd.

37 Then He said to His disciples, “The harvest truly is plentiful, but the laborers are few.  38 Therefore pray the Lord of the harvest to send out laborers into His harvest.” (Matthew 9:35-38)

Brethren, please pray for more laborers for the harvest.  We need more supporters and more ministers to help support the work of proclaiming the gospel of the kingdom of God.  This work will be accomplished (Matthew 24:14), but please do your part and pray for laborers as Jesus admonished.