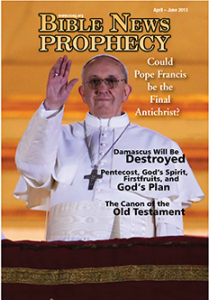 3 Damascus Will Be Destroyed There are many problems in Syria. What does the Bible show will
happen to its capital Damascus?
4 Could Pope Francis be the Final Antichrist? On March 13, 2013, Cardinal Jorge Mario Bergoglio
became Pope Francis. Could he be the final pope and antichrist?
8 Pentecost, God’s Spirit, Firstfruits, and God’s Plan In the Book of Acts, Pentecost
represented the granting of God’s Holy Spirit and the start of the church age. How else is in part of God’s plan.
18 What Should I Pray About? Christians should pray. This article gives some ideas of what to pray about.
21 The Canon of the Old Testament Many try to claim that the Church of Rome canonized the Old
Testament, but really was it not first known in Asia Minor by Church of God leaders?
29 Apparitions Claiming to Be Mary Multiple millions visit Fatima, Portugal from May to October each year because of an apparition. Did Mary appear in Fatima or anywhere else? Will apparitions later deceive much of humanity?
Back Cover: Internet and Radio Where can people find the message from the Continuing Church of God?

Posted in Magazines
About CCOG
The Continuing Church of God, which attempts to represent the most faithful remnant of the Philadelphia (Revelation 3:7) portion of the Church of God, bases its beliefs on the Holy Bible. Read CCOG's statement of beliefs for more information.
Recent Posts