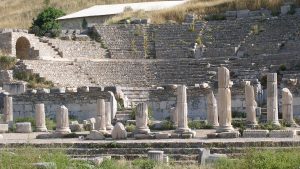 Does the Continuing Church of God (CCOG) have apostolic succession?

We are the faithful descendants of the apostolic ‘See of Ephesus’ which is sometimes referred to as the ‘See of Smyrna.’ We in the CCOG are NOT Protestant, Roman Catholic, nor Eastern Orthodox Catholic. We assert that we are the best 21st century representation of the original apostolic catholic church (see also the free online book: Beliefs of the Original Catholic Church).

We declare that we are the true spiritual descendants of the apostles. We assert that such descent is not dependent upon a bishop to bishop transfer, but a true holding of teachings in a little flock–Luke 12:32—along with a laying on of hands succession. While ordination is one aspect of spiritual authority, the church’s authority comes not so much from apostolic succession as it does from the word of God. In other words, the ministry is to be followed as it follows Jesus (cf. 1 Corinthians 11:1) and what the Bible teaches (e.g. 2 Timothy 3:16-17).

A laying on of hands succession means that, although there were unfaithful bishops/pastors throughout history, we in the CCOG declare that our members and leaders have an unbroken laying on of hands connection back to the original apostles who received God’s Holy Spirit in Acts 2:1-4. We also have the ‘last days signs’ of Acts 2:17-18 (see also Does the CCOG have the confirmed signs of Acts 2:17-18?), which we assert shows God’s confirmation of our church (cf. Mark 16:20; Hebrews 12:2).

While Jesus is perfect (Hebrews 2:10) and He is the true head of the church (Colossians 1:18), unlike the Church of Rome, we do not claim infallibility of any of our human leaders nor any of their writings. Nor do we view our ‘succession lists’ the same way that those in the Roman or Eastern Orthodox Catholic churches view theirs. Plus, we acknowledge that there can be more than one accurate succession list as there were many apostles and branches.

While recognizing that certain historical records are sparse, and many old Church of God documents (including lists) were destroyed, we have put together a tentative list as the details of several leaders as well as dates are not firmly established. While the first two centuries and last four centuries are reasonably firm, there is speculation related to several of the names as we have less information about leaders during the “church in the wilderness” (Revelation 12:6) time c. 380-1640 A.D. To a major degree, the records for that period are mainly reports from those who opposed many COG doctrines.

A sermon of related interest is also available:

What is apostolic succession? Is it in line with the teachings of Jesus? Is spiritual succession more important than claims of physical succession? Does any church have both? Is it possible that one city was to be the continual headquarters for Christians for nearly 2,000 years? What about the See of Ephesus or the See of Smyrna? What about the seven churches of Revelation 1-3? What time periods are covered by the Ephesus, Smyrna, Pergamos, Thyatira, Sardis, Philadelphia, and Laodicean eras of the Church of God? As there were over a dozen apostles in the New Testament, could there be more than one accurate succession list? What are some of the names did the Greco-Romans gave to people who opposed them, whether or not truly part of the Church of God? Who were the early successors in Jerusalem? Who were some of the successors in Asia Minor and Antioch? Have those with Church of God doctrines claimed apostolic succession throughout the centuries? Does the Continuing Church of God claim it has spiritual as well as ‘laying on of hands’ apostolic succession?

Here is a link to the sermon: Church in the Wilderness Apostolic Succession List.

It should be mention that we in the CCOG assert that some ‘records’ about individuals and groups from enemies were not accurate. Various other historians agree:

Enemies have sought to confound, so there might be imputed to the Waldenses any evil which had been brought home to the Albigenses and these last having been convicted of enormous errors in doctrines and practice, that the condemnation might embrace the Waldenses as well. (Trench RC. Lectures on Medieval Church History: Being the Substance of Lectures Delivered at Queen’s College, London. Macmillan, 1877, p. 246)

It is only from the enemies of God’s Church that we have scanty, malicious records of God’s people, who were now defined as “heretics” and “enemies of the church.” These records arrribute beliefs to God’s people which they never held. Heretics and the true Church are often called by the same names. For centuries Catholic writers mention small remnants of the true Church within the bounds of the Roman Empire. Sometimes they were individuals, sometimes scattered families, and especially in the Near East there were still a few local congregations preaching the gospel and keeping the commandments. (Hoeh H. A True History of the True Church. Radio Church of God, 1959, pp. 18-19)

The “Near East” means places like Asia Minor, Antioch, and Armenia. To “confound” means to condemn and confuse, in this case, with misinformation. The pagans and Jews did this related to early Christians (e.g. Acts 25:7-8), but sadly this happened with later Christians as well. So, it should not come as a surprise that less than flattering statements, or even claimed doctrinal issues, related to true Christian leaders has occurred throughout the church age. Hence, no we do not believe all the negative things about relatively old and new leaders on that list.

More on Christian history can be found in the free online book: Continuing History of the Church of God.

Information on some of our spiritual predecessors can also be found in the following: