We had a fine Passover and Night to be Observed, and the rest of the Days of Unleavened Bread have been going well. As far as we know, there were no significant problems with these observances for our people scattered around the world.

But in terms of problems, we continue to have issues with some website matters. The home page of COGwriter.com was not displaying properly, plus I had not been able to update articles (as opposed to news posts there). We have also had problems being able to update a French and a Tagalog item–but these were worked out. But we continue to work on them and hopefully are these type of issues will be resolved later this month.

Herb Haddon and Giselle, Richard Close and Gilbert and Joanne Audet, as well as myself, had a very profitable Passover and First Night of Unleavened Bread. I left my camera behind so, unfortunately, so we could not record Mr. Close’s incredibly powerful sermon and Bible study. I really hope that he records these, especially the sermon, as it was absolutely fantastic.

It was great that Richard Close was able to go to Canada and speak there.  He has traveled to see various people in our scattered groups in the USA and Canada.

The Last Day of Unleavened Bread for 2017 will be April 17th. It is a time for church services according to the Hebrew scriptures (Exodus 12:16).

In the New Testament, the Apostle Paul endorsed properly keeping the Feast with unleavened bread (1 Corinthians 5:7).  He and others still marked/observed it and observed it outside of Judea. Notice something from the Book of Acts:

6 But we sailed away from Philippi after the Days of Unleavened Bread, and in five days joined them at Troas, where we stayed seven days. (Acts 20:6)

If Christians were not keeping the Days of Unleavened Bread, the Holy Spirit would not have inspired this to be recorded like this. Now Philippi was a Gentile town in Macedonia. It was ruled by the Romans–thus keeping these days was NOT limited to a place like Jerusalem as I recently heard someone claim. In at least two places in the New Testament, we see that the Days of Unleavened Bread were to be kept in Gentile areas (1 Corinthians 5:7; Acts 20:6).

Consider also the statement “it was during the Days of Unleavened Bread” in Acts 12:3. Since the Gentile author Luke addressed the Book of Acts to another Gentile (Acts 1:1), why would he have mentioned these days if they were unknown to the Gentile Christians and had ceased to exist?

Information from outside the Bible reports that the Apostles Paul, John, and Philip, along with Polycarp of Smyrna and other early Christians, kept the Days of Unleavened Bread (Pionius. Life of Polycarp, Chapter 2). Various Sabbath-keepers continued to keep the Days of Unleavened Bread afterwards (Pritz. Nazarene Jewish Christianity.  Magnas, Jerusalem, 1988, p. 35; Jerome as cited in Pritz, pp. 58,62,63; Ephiphanius. The Panarion of Ephiphanius of Salamis: Book II (sects 1-46) Section 1, Chapter 19, 7-9. BRILL, 1987, p. 117-119) and into the Middle Ages and beyond (Liechty D. Sabbatarianism in the Sixteenth Century. Andrews University Press, Berrien Springs (MI), 1993, pp. 61-62; Falconer John. A Breife Refutation of John Traskes Judaical and Novel Fantyces, pp. 57-58, as cited in Ball B.  Seventh Day Men: Sabbatarians and Sabbatarianism in England and Wales, 1600-1800, 2nd edition.  James Clark & Co., 2009, pp. 49-50).

We in the Continuing Church of God also still keep the Days of Unleavened Bread. We eat some unleavened bread for each of the seven days as the Bible admonishes (Exodus 12:15; 13:6; 23:15; 34:18). This bread can be made of different grains/nuts—the use of wheat is not biblically-required.

While some like to allegorize away many portions of the Bible, although there certainly is a spiritual understanding to the Holy Days, there is also a physical one. And the physical observance helps us to better understand the spiritual lessons.

The Days of Unleavened Bread help picture that we Christians are to strive to put sin and hypocrisy out of our lives (cf. Matthew 16:6-12; 23:28; Luke 12:1). By keeping them physically, it helps us to better learn the spiritual lessons that God intended.

April 17 and 22 in Jensen Beach Florida!

We are planning to meet at the Vince Bocchino Community Center on the grounds of Langford Park, in Jensen Beach. The address is 2369 NE Dixie Hwy, Jensen Beach, FL 34957. We have the Vince Bocchino Community Center rented from 1:00pm and presume services will start by 1:30 pm both days. We plan to take up a Holy Day offering on April 17, 2017 while there.

If you are in Florida and may wish to attend, please email me: cogwriter@aol.com

A little while back, we made an arrangement with an outside organization to translate the English edition of the booklet, Should You Observe God’s Holy Days or Demonic Holidays?, into 98 languages. 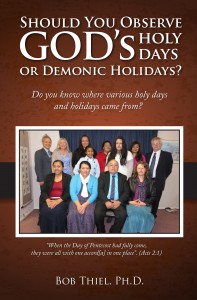 Anyway, we have received 20 translations so far, and just those online. It is our intent to have this particular booklet available in close to 110 languages, presuming that our African and European translators are able to finish it. We continue to plan for the ‘short work’ (cf. Romans 9:28) in order to have information available in as many languages as possible in accordance with Revelation 7:9.

We added more information in languages other than English.

Here is a link to our latest BNP magazine in the French language: Actualité et Prophéties de la Bible – Avril-Juin 2017.

The English booklet, The Gospel of the Kingdom of God, has now been translated into Tagalog! Here is a link: Ang Mabuting Balita ng Kaharian ng Diyos.

We also ordered a couple of dozen of this booklet to send to the Philippines, which are scheduled to arrive there late next month.

The evangelical Protestant Hank Hanegraaf, who calls himself “the Bible Answer Man,” and assisted in the falling away and apostasy of the old Worldwide Church of God, officially became a member of the Eastern Orthodox Church on Sunday (see CRI’s Hank Hanegraaff, who advised WCG to apostatize, converted to Eastern Orthodoxy). This is not only an anti-biblical move (as the Eastern Orthodox are even less biblical than the evangelicals), it could also be considered an ecumenical move. We will see more ecumenical moves in the future (cf. Revelation 13:4; 17:-10).

We are seeing ‘sabre rattling’ between the USA and North Korea (see North Korea threatens nuclear attack if USA acts; Donald Trump tweets ‘North Korea is looking for trouble’). The Chinese are taking notice and hope that military intervention by the USA military will not happen.

The Germans were hit with terrorism on Tuesday as one or more Islamists set off explosives intended to affect a sports team (see Explosions in Germany from Islamic terrorists). The time will come when Germany will decide it has had enough of Islam.

Islamic terrorism struck in Egypt on Sunday (see ISIS claims to be responsible for terrorist acts against Egyptian Copts as they observed ‘Palm Sunday’). The group calling itself the Islamic State of Iraq and Syria will NOT continue as it is and will one day be replaced by a different confederation in Middle East and North Africa (cf. Daniel 11:40-43; Ezekiel 30:2-8).

Because of various statements by US President Donald Trump, Mexico is looking more towards Europe and Latin America (see Mexico trying to pivot towards Europe and away from USA). This is consistent with biblical prophecy as well as what I wrote 9 years ago–we also put out a BNP video related to this a couple of months ago (watch Trade Wars: Are COG warnings coming to pass?).

Here is a suggested service for the Last Day of Unleavened Bread:

IN CASE YOU DO NOT RECEIVE A ‘LETTER TO THE BRETHREN’ FOR ANY WEEK, REMEMBER THAT THERE ARE MANY SERMON MESSAGES ON THE ContinuingCOG channel AND MANY SERMONETTE MESSAGES ON THE BibleNewsProphecy channel. There are also some messages at the CCOGAfrica channel.

19 What am I saying then? That an idol is anything, or what is offered to idols is anything? 20 Rather, that the things which the Gentiles sacrifice they sacrifice to demons and not to God, and I do not want you to have fellowship with demons. 21 You cannot drink the cup of the Lord and the cup of demons; you cannot partake of the Lord’s table and of the table of demons. 22 Or do we provoke the Lord to jealousy? Are we stronger than He? (1 Corinthians 10:19-22)

Brethren, this Sunday (Easter) is one of the world’s more revered holidays. Those of us who proper keep the Passover and the Days of Unleavened Bread are not to compromise with it.

As we eat unleavened bread each of the Days of Unleavened Bread, we realize that we have to avoid sin that is so prevalent in the world around us.