As always there is a lot going on in the Continuing Church of God.

Many matters in Africa and elsewhere were worked on.

We sent out a mailing to all of our subscribers. 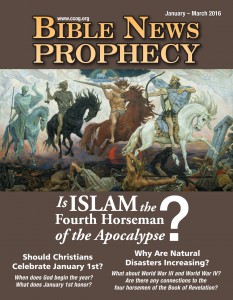 This mailing included the January-March 2016 edition of the Bible News Prophecy magazine (shown above), the second edition of the booklet Continuing History of the Church of God, and a Holy Day calendar that runs until 2024.

Since the magazine has an article about New Year’s Day, we tried to get it out so many of our subscribers would receive it by January 1, 2016.

All youth from CCOG congregations in Kenya were  invited to come to Ndhiwa for youth camp that ran from December 16 through, 2015.  Over 100 came, but Pastor Ochieng said  he has had technical problems, so he still intends to send some photos.

As announced last week, I was on the Nutri-Medical Report program yesterday, over the Genesis Communication’s Network. This program is heard all around the world.

The host and I discussed the fact that early Christians did not observe Christ’s birth, that there were warnings against the Saturnalia, and went over reasons why the Greco-Romans adopted December 25th.

While I did record a new sermonette, it did not get processed in time for the Bible News Prophecy channel.  At that channel we have all the scriptures shown on the screen, etc.

So, this week’s recommended sermonette is a message that Dick Close gave in Niagara Falls, Canada at the Feast of Tabernacles this year.

Next week, we should have the sermonette I prepared finished. So this coming Sabbath, I plan to video something to be used for the Night to be Much Observed.

The United Nations says more than 18 million people across eastern Africa are at risk of food insecurity due to El Niño weather patterns and conflicts in the region.

“The drought in the northern sector will continue till the next rainy season while the rains will subside in half of Kenya but will have above average rain in Southern and Western Kenya and Uganda, Tanzania especially around the Great Lakes area,” said Artan.

El Niño, a climate phenomena, occurs when temperatures in the central and eastern Pacific Ocean become warmer than average, causing a shift in atmospheric circulation.

El Niño’s impact was felt in eastern Africa as far back as early May when drought conditions affected parts of Ethiopia, Sudan and Somalia.

According to Pete Manfield from the U.N. Office for Coordination of Humanitarian Affairs (OCHA), an estimated 18.5 million people are at risk of starvation due to drought and conflicts in the region.

“There are a number of conflict dynamics in the region which are new this year which are adding quite a significant strain to the new humanitarian requirement, particularly conflicts in Burundi, South Sudan and in Yemen, and this is requiring a scale up in short-term life-saving interventions,” he said.

The regional drought has hit Ethiopia especially hard, and the government there is appealing for $1.1 billion to help feed more than 10 million people.

The drought in eastern Africa has affected us as we have provided some financial assistance to provide food to people in at least two of the affected countries.

We help as we are able, but I am sure that the Africans would like a lot more.  But as it has so far turned out, 2015 was a year where we spent more money than we brought in.  We were able to do this because we had a small surplus in 2014, that we spent in 2015, and obviously we cannot continue to spend more than we bring in.

But it is good that we were able to help and provide more aid to those in Africa in 2015 than we needed to provide in previous years.

As mentioned before, those who live in the United States are reminded that for contributions to be eligible for tax deduction for calendar year 2015, all donations mailed must be postmarked no later than December 31, 2015.

All contributions received via US mail for residents of the United States should be processed based upon the postmarked date on the envelopes.

In New Zealand and Canada the rules may be slightly different for mailed and other contributions, so if you want the tax deduction for calendar year 2015, you may wish to make your next contribution relatively soon.

British Prime Minister David Cameron indicated that he might hold the referendum he promised UK voters about whether or not to remain part of the European Union in 2016 (see UK’s David Cameron hints of EU referendum in 2016; Nigel Farage still popular within UKIP).  He most likely will pick a time for such a vote that he feels it is more likely that the majority will vote to remain in the European Union.  However, irrespective of how the UK will vote, the time will come when the UK will be taken over by a reorganized (Revelation 17:12-13) power in Europe (cf. Jeremiah 30:7).

We are seeing berserk weather patterns in the USA and more pollution in Asian cities (see CBS: ‘“West vs. East”: Temperatures out of whack across U.S.’; Beijing’s and Delhi’s air pollution crisis).  The Bible has many warnings of weather curses (e.g. Deuteronomy 28:15-24; Amos 4:7-9) and humanity seems to be determined to experience them.

An interesting observation from Herr Guttenberg is that the USA presidential campaigns will basically “forget Europe” (Time bemoans lack of global leadership; Karl-Theodor zu Guttenberg says US presidential candidates ‘forget Europe’).  By living in the USA, as Karl-Theodor zu Guttenberg has done the past couple of years, he has learned that while Europe has been looking to the USA, that the USA tends to consider Europe somewhat irrelevant.  This will likely affect him as well as his real views towards the USA.  The Bible shows that Europe will be highly relevant (Revelation 13,17, &18) and that it will one day takeover the nation with the “strongest fortresses” (Daniel 11:39), which at this time in the 21st century would be the USA.  USA political candidates may well forget Europe, but Europe will become a force to be reckoned with.

Speaking of Europe, yesterday it was announced that Pope Francis is to be the 2016 recipient of the Charlemagne Prize for his efforts on behalf of European Unity (see Pope Francis wins the ‘Charlemagne Prize’).  The Bible warns about an alliance between Europe and a church based in the city of seven hills.  The Vatican and Europe seem intent on ignoring those warnings.

Last week’s recommended sermon (watch Terrorism, Christianity, and Islam) had to do with terrorism, prophecy, and Islam.  There were reports this week of a terrorist-related attack in Afghanistan (see Afghanistan is still a hot bed of terror).  There are also concerns that Islamic terrorists are trying to figure out ways to disrupt the electrical power grid in the USA (see Islamic sources attempting to crash electrical grids in the USA).  The threat of terrorism is real and the USA and others will be hit by more of it (e.g. Deuteronomy 32:25).

If your internet connection is still too slow (as my home one is) and/or you prefer audio messages to audio-visuals ones, go to the YouTube link for the message, click on SHOW MORE related to the description. You will then see something that says, “Download MP3.” Below that is a link to an MP3 file. Most computers (and even some cellular telephones) will allow MP3 files to be downloaded and played. This is an option we have made available (but we are also looking into ways to improve that as well)–and, of course, we have written article options that we list each week. Some people have found that if their internet connections are not fast enough, that they can simply listen to the messages that are found at the new Bible News Prophecy online radio channel.

21 “Not everyone who says to Me, ‘Lord, Lord,’ shall enter the kingdom of heaven, but he who does the will of My Father in heaven.  22 Many will say to Me in that day, ‘Lord, Lord, have we not prophesied in Your name, cast out demons in Your name, and done many wonders in Your name?’  23 And then I will declare to them, ‘I never knew you; depart from Me, you who practice lawlessness!’ (Matthew 7:21-23)

Brethren, we live in a world where many call Jesus ‘Lord,’ but do not believe that they have to live as He taught His followers to live.  During this time of year when many use the name of Christ, consider that there is a difference between true followers of our Lord and those who claim to be (watch also Birthdays, Christians, and December 25th).