Greetings to you all.

Steve Dupuie recently finished putting together a photo album related to the 2020 Feast of Tabernacles.

Now that it is available, instead of recommending the one we did last Sabbath (which we intend to recommend later) his The Continuing Church of God Feast of Tabernacles 2020: Restored Truth video is the recommended sermonette for the week.

This is the time of year when much of the world celebrates Christmas.

As you probably realize, the Bible never endorses the celebration of birthdays, including that of Jesus. The early Church of Rome did not celebrate Christmas nor any other birthday. Birthday observances were still condemned in the late 3rd century by Arnobius (Against the Heathen, Book I, Chapter 64).

Furthermore, Tertullian warned that to participate in the winter celebrations with wreaths and gift-giving made one beholding to pagan gods. There was one such celebration known as the Saturnalia that was celebrated by the heathen in late December.

The claimed “father of Latin theology,” Tertullian denounced winter celebrations, such as Saturnalia (from a pagan deity whose name meant plentiful) which morphed into Christmas as he wrote:

The Minervalia are as much Minerva’s, as the Saturnalia Saturn’s; Saturn’s, which must necessarily be celebrated even by little slaves at the time of the Saturnalia. New-year’s gifts likewise must be caught at, and the Septimontium kept; and all the presents of Midwinter and the feast of Dear Kinsmanship must be exacted; the schools must be wreathed with flowers; the flamens’ wives and the aediles sacrifice; the school is honoured on the appointed holy-days. The same thing takes place on an idol’s birthday; every pomp of the devil is frequented. Who will think that these things are befitting to a Christian master, unless it be he who shall think them suitable likewise to one who is not a master? (Tertullian. On Idolatry, Chapter X)

Around the time of Tertullian, the Roman Bishops Zephyrinus (199-217) and Callistus (217-222) had a reputation of compromise and corruption (and this is confirmed by such Roman Catholic saints such as Hippolytus (Hippolytus. Refutation of All Heresies, Book IX, Chapter VI) and allowed people in their church that compromised with paganism, etc.

The Babylonians also celebrated a rebirth of the sun during the season of the winter solstice. December 25th was eventually chosen as the date of Jesus’ birthday, because the Saturnalia and other sun god worship happened at that time of the year:

In 354 A.D., Bishop Liberius of Rome ordered the people to celebrate on December 25. He probably chose this date because the people of Rome already observed it as the Feast of Saturn, celebrating the birthday of the sun. (Sechrist EH. Christmas. World Book Encyclopedia, Volume 3. Field Enterprises Educational Corporation, Chicago, 1966, pp. 408-417)

Helios Mithras is one god…Sunday was kept holy in honour of Mithra, and the sixteenth of each month was sacred to him as mediator. The 25 December was observed as his birthday, the natalis invicti, the rebirth of the winter-sun, unconquered by the rigours of the season. (Arendzen J.  Mithraism. The Catholic Encyclopedia, Volume X. Nihil Obstat, October 1, 1911)

Emperor Constantine had been the follower of the sun-god Mithras, who was considered to be the unconquered sun and was one born from a rock in a below ground cave. Perhaps because of this, his mother Helena decide to believe the myth that Jesus was born in a below ground rocky cave.

Rome now teaches this (and this author has seen that ‘nativity’ displayed multiple times in Vatican City), but in the third century one of its supporters, Commodianus, condemned the rock deity:

The unconquered one was born from a rock, if he is regarded as a god. Now tell us, then, on the other hand, which is the first of these two. The rock has overcome the god: then the creator of the rock has to be sought after. Moreover, you still depict him also as a thief; although, if he were a god, he certainly did not live by theft. Assuredly he was of earth, and of a monstrous nature. And he turned other people’s oxen into his caves; just as did Cacus, that son of Vulcan. (Commodianus. On Christian Discipline)

Jesus was not born from a rock, yet that is partially how His birth is now portrayed. It is also not true to teach that He was born on December 25th. Scholars recognize that shepherds would not have been out with their flocks in the field (like the Bible shows in Luke 2:8) as late as December 25th and that the biblically-mentioned (Luke 2:1-5) “census would have been impossible in winter” (Christmas. The Catholic Encyclopedia, 1908).

Many of the practices and customs associated with Christmas come from paganism as real scholars will admit. Neither Jesus’ apostles nor their early followers observed Christmas.

We in the Continuing Church of God do not as well. See also the free book: Should You Keep God’s Holy Days or Demonic Holidays? 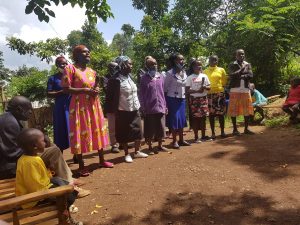 Greetings from Kenya.
I kept Sabbath in Kisii on Sabbath. The meeting was very fine. I also supervised the chicken projects that they are doing. Their project is going on well. We also put some money for them to start the permanent hall foundation. They will start it soon after the youth camp. … So I just told them to put the foundation and we will continue to contribute for it bit by bit till it got finished.  I told  Ezekiel that we shall buy motorcycle to help him move in Kisii by the end of this January because end of this month we are going to buy motorcycle to help Sawek.
The meeting was successful. We had two new people from SDA who joined the church. The number of that day was 85. We also talked about youth camp which is going to start on 23rd December.
The growth in Kenya is going very well.
Evans

It is great that it is going well. We strive to go through the doors that Jesus opens.

Perhaps I should add that I suspect that more SDAs (Seventh-day Adventists) who have not known the full truth about their history and doctrine will come with us over time.

The US Congress agreed on more debt as part of another “stimulus” program blamed on COVID -19 (see COIVD ‘stimulus’ and another $1.4 trillion in debt). President Donald Trump has threatened to veto the bill as he wants it larger (it means more debt). Debt is a factor that is prophesied to lead to the end of the USA (cf. Habakkuk 2:6-8).

After a year seeing a lot of race-connected riots and protests, the City of Detroit has seemingly decided to sue Black Lives Matter for conspiracy to promote violence, etc. (see SGT: Tables Turned: Detroit Sues Black Lives Matter Group for ‘Civil Conspiracy’ to Riot and Attack Police). The USA remains divided and division is not good for a nation (cf. Matthew 12:25).

Over in Europe, there is a UK-EU agreement on trade and other matters related to Brexit (see BBC: Brexit: Boris Johnson hails free trade deal with EU). I expect that the UK and EU will have problems with the agreement. While the UK will have some ups and downs, this will not end well for the UK (cf. Daniel 8:24-25; Isaiah 17:3).

The Book of Jeremiah teaches:

3 For the customs of the people are vain: for one cutteth a tree out of the forest, the work of the hands of the workman, with the axe.

4 They deck it with silver and with gold; they fasten it with nails and with hammers, that it move not.

5 They are upright as the palm tree, but speak not: they must needs be borne, because they cannot go. Be not afraid of them; for they cannot do evil, neither also is it in them to do good.