We hope and pray that you have had a spiritually productive week.

Because of COVID-19 issues we began the process of looking for Feast of Tabernacles’ sites a bit later than we normally would.

While there still exists a small, very small, possibility that Australia could open up for foreign visitors before Fall of 2021 that could affect our plans for a USA site–as we would need one on the West Coast if my wife Joyce and I spent the first half of the Feast in Australia–we are not counting on that.

Furthermore, as we should not wait until the Summer of 2021 to locate a USA site, we have now begun the process.

A couple of weeks ago, I spoke to a CCOG member in Tennessee. It was his opinion that his state was open and that we would not face COVID restrictions that would interfere with the Feast of Tabernacles.

So, I made a few phone calls to two different cities there in the past week (Pigeon Forge and Chattanooga)–and may consider other cities, and also other states.

One of the reasons we are considering Tennessee for the USA is because some have asked about it.

Another reason is that we have not held the Feast of Tabernacles particularly close to Tennessee in the past.

While we do not need to hold sites in all states or regions, we have striven to have them in scattered locations which has made it easier for some to visit (who otherwise would not) when we are closer to them.

New Zealand has also started looking into possible sites for 2021.

Information on sites around the world, which is expected to be updated when we have more information, is at the following link: Feast of Tabernacles’ Sites for 2021.

The recommended sermon for this week is part of a new sermon series that we expect to do for a couple of weeks and then go back to it later. 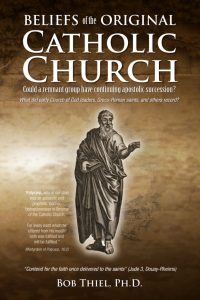 This sermon also introduces a new book which is in draft form, but which is not yet done. We expect to add more to it, but a draft is still available online: Beliefs of the Original Catholic Church.

There are many items in the book that will be shocking to Roman and Eastern Orthodox Catholics, as well as to many who have long been in the Church of God. This book is part of the materials we believe we need to have related to the final phase of the work. The hope is that going through it in sermons and updating and sending it out once it is basically done will result in helping Christians God will use in the last days “to instruct many” (Daniel 11:33) during a coming time of persecution.

This book, along with the last several we put out, is something that I have believed for some time that we need to have in order to be best prepared for the ‘‘short work’ that the Apostle Paul wrote about in Romans 9:28.

But, this book intentionally needed to be done after our latest book, Who Gave the World the Bible? The Canon: Why do we have the books we now do in the Bible? Is the Bible complete?, was written as will be foundational for Christians to know when dealing with Greco-Romans (and it came after other ‘foundational books such as Is God’s Existence Logical? and Proof Jesus is the Messiah).

We continue to put materials together so that YOU may be among those that God may use to “instruct many” (see also Preparing for the ‘Short Work’ and The Famine of the Word).

We are seeing protests and conflicts in many parts of the world (see Myanmar, Haiti, Hong King, Ethiopia, Russia, Yemen, Syria, & Iran: Protests, wars, and rumors of war).

In the USA,a new poll finds that 46% of Americans consider that a civil war is likely to come (see Impeachment and other division: 46% of Americans expect civil war). This is up from about 34% after various riots and protests last June.

Speaking of the USA, we are seeing issues between it and Iran (see VOA: Khamenei: US Must Lift Sanctions for Tehran to Return to Nuclear Commitments).

Notice also some reports related to Iran itself:

Tehran, Iran — Iran’s intelligence minister has warned the West that his country could push for a nuclear weapon if crippling international sanctions on Tehran remain in place, state television reported Tuesday. https://www.cbsnews.com/news/iran-issues-rare-threat-to-develop-nuclear-weapon-if-pushed/

But then the powerful intelligence chief pivoted to a “threat” at a moment of continued standoff with the Biden administration over the restoration of the JCPOA nuclear deal:

“I will only say this: if a cat is backed into a corner, it might behave the way it wouldn’t while free. If Iran is pushed in that direction, it will not be Iran’s fault. Under the regular circumstances, Iran has no such plans,” he said.

Alavi affirmed further: “If they push Iran in this direction, it won’t be the fault of Iran, but the fault of those who have pushed Iran.” https://www.zerohedge.com/geopolitical/iran-issues-rare-declaration-pursue-nukes-if-backed-corner

Iran is a place in the past couple of years I would associate with rumors of war. We look to be getting closer to at least a regional war in the Middle East (cf. Isaiah 22:6-8).

19 Now the works of the flesh are evident, which are: adultery, fornication, uncleanness, lewdness, 20 idolatry, sorcery, hatred, contentions, jealousies, outbursts of wrath, selfish ambitions, dissensions, heresies, 21 envy, murders, drunkenness, revelries, and the like; of which I tell you beforehand, just as I also told you in time past, that those who practice such things will not inherit the kingdom of God.

22 But the fruit of the Spirit is love, joy, peace, longsuffering, kindness, goodness, faithfulness, 23 gentleness, self-control. Against such there is no law. 24 And those who are Christ’s have crucified the flesh with its passions and desires. 25 If we live in the Spirit, let us also walk in the Spirit. 26 Let us not become conceited, provoking one another, envying one another. (Galatians 5:18-26)

Brethren, we are not to live as those in the world do.

So no, for example, we will not be observing ‘Valentine’s Day‘ this Sunday nor Lent of Ash Wednesday next Wednesday.

We need to have our lives demonstrate the fruits of the Spirit, which includes being kind to one another (and others as well) and not following the dictates of Satan’s society.