Greetings to all of you.  Another full week of working on proclaiming the gospel, feeding the flock, and working on aspects of the final phase of the work.

The recommended sermon for this upcoming Sabbath is part one of an intended two-part series on Satan’s plan.  There are many aspects of his plan that most Christians do not know, but that Philadelphian Christians really need to learn. 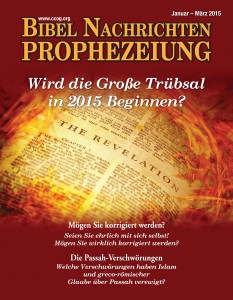 We were able to get the Bible News Prophecy magazine in the German language uploaded today.  Here is a link to it: Bibel Nachrichten Prophezeiung magazin, Januar – März 2015.  This is fantastic.  Our volunteer translators are greatly assisting us in our efforts to work towards fulfilling Matthew 24:14 and Matthew 28:19-20!

I ended up doing a last minute radio interview on Monday.  The host and I mainly discussed the decision by the US Supreme Court to allow the federal government to force the State of Alabama to allow homosexual marriage.  I brought up various scriptures as to why this was not the moral thing to do (see also US Supreme Court pushes homosexual marriage on Alabama).  We also discussed risks associated with mandatory vaccinations.

At this instant, I am also scheduled to be on the same show on the radio next Tuesday, February 17, 2015 at 15:05 EDT/12:05 PDT.  The program is called the ‘Nutri-Medical Report’ and prophetic and biblical matters are expected to be discussed.  This is broadcast over the Genesis Communications Network.

Earlier this week, I was asked to provide some signed Immunization Exemption Request forms for children of members in the Midwest USA.  The primary requester provided a lot of information which made it relatively easy to develop our own form for the Continuing Church of God.

Now that we have a form, I was able to send several out yesterday.  If any members need one for themselves or for their children, we can provide them (but realize that it can take time as I travel and do not carry forms like that with me).

The Continuing Church of God teaches that vaccinations are a personal decision.   The Continuing Church of God neither requires its members (or their children) to be vaccinated nor to refrain from vaccinations.  This is a personal matter.  For those who might wonder, my wife and I never had any of our children vaccinated nor have we personally ever been vaccinated for going overseas (though there could be places in the future that could mandate it).

It probably should be mentioned that although 48 of the 50 USA states allow for religious and/or philosophical exemptions to vaccinations, the US Supreme Court has basically indicated that public school systems can require this irrespective of the beliefs of the parents and/or their children.  So, while we are willing to provide these exemption forms, please understand that in many lands (and not just the USA) the government is reducing rights in many areas, including those associated with vaccinations.

This upcoming Sabbath, many in the world will be observing a pagan holiday that was renamed Valentine’s Day.  We have an updated article (see Valentine’s Day: Its Real Origins) and a sermon available on it (watch Valentine’s Day, Christianity, and Islam).  It is NOT a Christian holiday.

We found a portable light that was on sale (discounted) that we bought to increase the lighting we use for the Bible News Prophecy and Continuing COG YouTube videos.  We used it for the first time last Sabbath, but since it was overcast outside (and we use a fair amount of natural light when we do most videos) the additional light may not be apparent.  However, we think this is increasing the amount of light, which should improve overall viewing.

Neither my wife Joyce nor I are lighting experts, but have worked to improve this.  In order to reduce glare, I might try something new the next time we video.

I went to visit our two congregations in Nyakach where I gave them the food support which was donated by the CCOG. Before saying anything, let me give the appreciation of our brethren in Nyakach.  They received that support wholeheartedly and told me to thank you very much for the support.

There has been drought in Kenya in areas including Nyakach.  We try to assist where we can.

The northeast part of the USA keeps getting a lot of snow–enough to break some records (see Record breaking snowfall totals from Northeast USA; Does God use snow to correct?).  What many probably do not realize is that the Bible shows that God sometimes uses snowy weather for correction (Job 37:5-6, 9-13) and even for times of trouble (Job 38:22-23).

US Supreme Court Justice Ruth Bader Ginsburg announced that she believes that Americans are ready to accept homosexual marriage as a ‘Constitutional right.’  She mentioned “The change in people’s attitudes on that issue has been enormous” (see Justice Ginsburg: Americans are ready for homosexual marriage to be a Constitutional right). As those in the USA distance themselves more from biblical morality, they will accept many things that lead to destruction (cf. Romans 1:18-32).

In North Carolina, an atheist decided to shoot and kill three Muslims that he seemed to know.  Oddly, he had earlier claimed that atheism would solve the problems in the Middle East (see Anti-theist murders three Muslims).  Of course, atheists can kill and there would be national/ethnic/tribal/ego issues in the Middle East even if there was no religion like Islam.

Over in the UK, Prince Charles said he hopes to “build bridges” between differing religious faiths (see Prince Charles seems to support the interfaith agenda).  It may be of historical note to remember that the term Pontifex Maximus means master bridge builder.  It was a title of the head of the ancient Roman Empire and was adopted by a pope in the fourth century right after a Roman emperor stopped using it.  Many seem to falsely believe that the interfaith movement will bring real peace.

US Senator, and former Republican presidential nominee, John McCain accused the Europeans of promoting a policy of appeasement with the Russians over Ukraine (see John McCain indicates EU leaders using appeasement).  Later, USA President Barack Obama indicated support for the European plan.  As far as appeasement goes, I believe that when the USA put a German general of the the US Army in Europe last year, that was a form of appeasement.  After it is too late, the USA will realize that Europe is a much bigger threat to it than Russia is (cf. Daniel 11:39).

Speaking of Russia and the Europeans, they ended up announcing a ceasefire deal today (see Cease fire deal reached for Ukraine: Will it really bring peace?).  The last ceasefire deal did not last long.  Ultimately, there will be a time of peace between Russia and the Europeans, but the Bible shows it will end with the Russians leading a force against Europe (e.g. Jeremiah 51:11, 28-29).

Over in the Middle East, Jordan made the news a few times for its bombing of territories controlled by the terroristic group calling itself the Islamic State (see Jordan again bombs Islamic State).  The suggested sermonette for this week is related to Jordan and is titled Jordan, Petra, and Armageddon.

2 When pride comes, then comes shame;
But with the humble is wisdom.
3 The integrity of the upright will guide them,
But the perversity of the unfaithful will destroy them.
4 Riches do not profit in the day of wrath,
But righteousness delivers from death.
5 The righteousness of the blameless will direct his way aright,
But the wicked will fall by his own wickedness.
6 The righteousness of the upright will deliver them,
But the unfaithful will be caught by their lust.  (Proverbs 11:2-6)

Brethren, be careful about pride.  Pride is something that Satan counts on.  Live righteously and obey God.  You are in my prayers.