Next week, on February 23rd, Greco-Romans observe a day to honor of Polycarp of Smyrna. This is based on the erroneous belief he was martyred then.

Anyway, because of that date, and the fact that the Greco-Romans think that Polycarp was their type of catholic, the sermon produced for this week is What Type of Catholic was Polycarp of Smyrna?

It covers information in our latest draft of the book: Beliefs of the Original Catholic Church which features an artist’s portrayal of Polycarp on the cover. 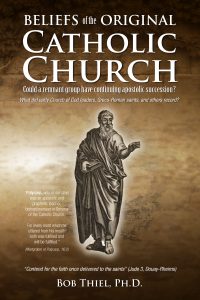 As a successor to the apostles and one who held to Church of God doctrines, many Greco-Romans and Protestants (who tend to consider Polycarp one of their saints) would be surprised to learn that Polycarp would have denounced many of their beliefs and practices.

Joyce, David, and I may be traveling to the East Coast next week and may be available for Sabbath services, possibly somewhere south of Charlotte, North Carolina.

If you may be interested in attending and/or may be able to suggest a location for meeting, please email me at: COGwriter@aol.com

We finally put up live our URL: studythebiblecourse.org

We have had that URL for some time and decided to make it live as well as to put links to the lessons of our Study the Bible Course on it.

All the lessons are not up yet, but several are and we hope to finish reformatting and loading the lessons we have available soon.

We believe this website will make it easier for people to find them as well as to choose lessons either in order or according to their preferences.

We continue to see potential issues between the Israel, the USA, and Iran (see UN: Iran producing uranium metal in violation of 2015 nuclear deal; Israel is concerned and may not support Biden-Harris plans). Because of biblical prophecies like Isaiah 22:6-8, which may precede the ‘peace deal; of Daniel 9:27, this situation remains one to prophetically watch.

Former US President Donald Trump was acquitted as the Senate failed to get a 2/3 majority to impeach him (see Senate votes 57 to 43 to impeach Donald Trump, which means he is acquitted: Trump Says MAGA “Has Just Begun”). Since it was generally understood that a 2/3 majority would not happen, some think the purpose of the impeachment was to mark Donald Trump as trouble while others seem to believe it was intended to set the stage to consider Trump supporters and religious conservatives to be potential criminals (see Aim of impeachment to support monitoring ‘domestic terrorism’? Kevin Sorbo removed from Facebook). The USA remains divided and the impeachment does not seem to have changed that–and may have made the divisions even stronger between the two main political factions in the USA. Many in Europe see the USA in decline (see Nord Stream 2 and other European moves away from the USA: USA too damaged to lead?).

As far as US presidents go, the Roman Catholic world has issues with President Joe Biden (see WND: Archbishop to Biden: Stop calling yourself a ‘devout Catholic’). However, because of his promoting of aspects of the ‘great reset’ and ‘climate change’ agendas, Pope Francis seems to prefer him to Donald Trump. While the US will not voluntarily adopt all aspects of the coming totalitarian new world order, we are seeing aspects being pushed in the US.

We continue to see more promoting of the LGBTQ+ agenda in many parts of the world.

Last week it was claimed that a proposed law for one of the states in Australia will essentially force people to promote aspects of the LGBTQ+ agenda, specifically related to transgender pronouns and inability to change from certain biblically-condemned behaviours (see Australia seemingly wants to make slack of support of transgender agenda a crime).

There are several reasons that is wrong.

First of all, the Bible teaches that LGBT practices are abominable:

5 A woman shall not wear anything that pertains to a man, nor shall a man put on a woman’s garment, for all who do so are an abomination to the Lord your God. (Deuteronomy 22:5)

13 If a man lies with a male as he lies with a woman, both of them have committed an abomination. (Leviticus 20:13)

Secondly, the Bible teaches that such who do these things can change:

9 Know ye not that the unrighteous shall not inherit the kingdom of God? Be not deceived: neither fornicators, nor idolaters, nor adulterers, nor effeminate, nor abusers of themselves with mankind,

10 Nor thieves, nor covetous, nor drunkards, nor revilers, nor extortioners, shall inherit the kingdom of God.

11 And such were some of you: but ye are washed, but ye are sanctified, but ye are justified in the name of the Lord Jesus, and by the Spirit of our God. (1 Corinthians 6:9-11, KJV)

5 Put to death, therefore, whatever belongs to your earthly nature: sexual immorality, impurity, lust, evil desires and greed, which is idolatry. 6 Because of these, the wrath of God is coming. 7 You used to walk in these ways, in the life you once lived. 8 But now you must also rid yourselves of all such things as these: anger, rage, malice, slander, and filthy language from your lips. 9 Do not lie to each other, since you have taken off your old self with its practices 10 and have put on the new self, which is being renewed in knowledge in the image of its Creator. (Colossians 3:5-10, NIV)

Thirdly, Christians are not only not to be LGBTQ, they are NOT to condone such activities according to the Bible:

18 For the wrath of God is revealed from heaven against all ungodliness and unrighteousness of men, who suppress the truth in unrighteousness …22 … professing to be wise, they became fools, …

24 Therefore God also gave them up to uncleanness, in the lusts of their hearts, to dishonor their bodies among themselves, 25 who exchanged the truth of God for the lie, …

26 For this reason God gave them up to vile passions. For even their women exchanged the natural use for what is against nature. 27 Likewise also the men, leaving the natural use of the woman, burned in their lust for one another, men with men committing what is shameful, and receiving in themselves the penalty of their error which was due.

28 And even as they did not like to retain God in their knowledge, God gave them over to a debased mind, to do those things which are not fitting; 29 being filled with all unrighteousness, sexual immorality, wickedness, covetousness, maliciousness; full of envy, murder, strife, deceit, evil-mindedness; they are whisperers, 30 backbiters, haters of God, violent, proud, boasters, inventors of evil things, disobedient to parents, 31 undiscerning, untrustworthy, unloving, unforgiving, unmerciful; 32 who, knowing the righteous judgment of God, that those who practice such things are deserving of death, not only do the same but also approve of those who practice them. (Romans 1:18,22,24-32)

Yes, various leaders want to suppress the truth in unrighteousness.

Notice also some of what the Bible says and it teaches:

8 Now go, write it before them on a tablet, And note it on a scroll, That it may be for time to come, Forever and ever:

9 That this is a rebellious people, Lying children, Children who will not hear the law of the Lord;

And to the prophets, “Do not prophesy to us right things; Speak to us smooth things, prophesy deceits. 11 Get out of the way, Turn aside from the path, Cause the Holy One of Israel To cease from before us.” (Isaiah 30:8-11)

1 Cry aloud, spare not; Lift up your voice like a trumpet; Tell My people their transgression, And the house of Jacob their sins. (Isaiah 58:1)

More and more people do not want to hear the truths related to the law of God or prophecies from His word.

Because of that and this COGwriter Church of God News page’s repeated condemnation of the LGBTQ+ agenda, both YouTube and Google have shadow banned COGwriter posts and our BibleNewsProphecy videos (e.g. Letter to the Brethren: January 7, 2021). This is something I also verified a couple of times this month when I did two searches in Google and two in DuckDuckGo. In both instances, a COGwriter item showed up on the first page of DuckDuckGo (which is basing results on popularity and relevance) but not on the first few pages of Google (which looks to be using tactics to push views it does not want seen substantially out of the public view).

It does not help women’s rights to allow males to compete as females or to eliminate words that the Bible uses like mother and father or to refer to girls as boys.

Remember that the Bible show that God made humans male and female:

27 So God created man in His own image; in the image of God He created him; male and female He created them. (Genesis 1:27)

Nowhere in the Bible is any human considered to be any sex/gender other than male or female. And those who act otherwise are warned against (Deuteronomy 22:5; 1 Corinthians 6:10-12; Romans 1:18-32). One is not a different gender than their actual genitalia.

But many others have their own, antibiblical ideas. Yet:

The transgender agenda encourages and exploits confusion. It is NOT good for those who consider themselves transgendered.

The transgender movement is an abomination and destructive to society.

Jeremiah was told to write the following:

22 “For My people are foolish,
They have not known Me.
They are silly children,
And they have no understanding.
They are wise to do evil,
But to do good they have no knowledge.” (Jeremiah 4:22)

By not acknowledging and accepting the differences between males and females, the USA and its British-descended allies are showing that they “are wise to do evil” and lack the knowledge “to do good.”

Brethren, we are not to be like them, even if we live in their societies.

That does NOT mean that we need to be personally insulting people nor intentionally provoking the LGBTQ crowd (cf. Matthew 10:16-17) , but we are to speak the “truth in love” (Ephesians 4:15) while not condoning sinful behaviour (cf. Romans 1:18-32).

The USA and its British-descended allies may not last until the end of this decade (see Might the U.S.A. Be Gone by 2028?).

Keep that possibility in mind as you seek first the kingdom of God and His righteousness (Matthew 6:33).