We closed our calendar year 2022 accounting-wise and have mailed donation receipts to donors in the USA. If you need one and do not receive one within the next ten days, let us know and we can send another.

If you are in Canada or New Zealand, the offices in those countries handle that based on local regulations.

Jesus said, “where your treasure is, there your heart will be also” (Matthew 6:21) and “I was hungry and you gave Me food; I was thirsty and you gave Me drink … inasmuch as you did it to one of the least of these My brethren, you did it to Me (Matthew 25:35,40) and “Go therefore and make disciples of all the nations, baptizing them in the name of the Father and of the Son and of the Holy Spirit, 20 teaching them to observe all things that I have commanded you; and lo, I am with you always, even to the end of the age” (Matthew 28:19-20).

In the Roman calendar year of 2022, income we received in the USA was up 13.8%. This increase was partially due to some unexpected seemingly ‘one time’ donations. Having this much increase was helpful as we have been expanding the number of countries with congregations, greatly increased the number of languages we have the gospel of the Kingdom of God available in, and because we greatly expanded our presence on radio around the world.

So, how were funds spent? 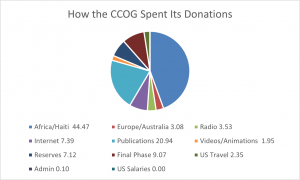 Yes, our income goes to support the physically and spiritually poor as we work to fulfill Matthew 24:14, Romans 11:25, the Ezekiel Warning, and Matthew 28:19-20.

Here are some longer explanations of each of the categories:

The vast bulk of funds are spent to preach, reach, prepare for the short work (Romans 9:28), and teach, with nearly all the rest to support the poor and widows. It appears that never before in Church of God history have so few helped so many with so little for so long in order to have the impact that the Continuing Church of God is having.

The Continuing Church of God accepts tithes, offerings, and other financial donations.

Those who wish to voluntarily aid and support this worldwide Work of God are gladly welcomed as co-workers in this major effort to preach and publish the gospel to all nations per Matthew 24:14 and Matthew 28:19-20.

Some have sent checks, others cash, others money orders, and even have used Western Union to donate.  We also accept bank transfers.

And yes, in the USA, donations are immediately tax deductible as we have full IRS tax exempt status per Title 26 IRC 508(c)(1)(A). For those who in live in the State of California, we were specifically-approved in writing for our request for tax exemption status there. California nonprofit corporation number C3558924.

Donations to the Continuing Church of God are 100% deductible in all the US states.

Tax exempt status in Canada was also approved, and hence donations in Canada are also fully tax deductible. Check out CCOGCANADA.CA as you have to send donations to Canada for them to be deductible there.

In last week’s letter, I asked all of you to pray for the safety of evangelist Evans Ochieng as he was planning on going to the Democratic Republic of the Congo.

He flew there yesterday and then also came to meet people with Moise Nshimiyimana from Rwanda (many with ties to Rwanda live in the Congo).

Here is  a report and a photo he sent late yesterday:

Greetings from Congo.
I arrived Congo safe. The weather was very nice.
I was received by many brethren in Congo and Ezekiel. We came with moise from Rwanda. This people are very happy. We had a discussion this afternoon with many of them. They wanted to know a lot from the church. Most of them are from seventh day church of God and seventh day Adventist.
And there’s another Church here called church of Jesus Christ. Some came from that church.
We shall have discussion tomorrow with many of them. I’ll be in Congo till Monday. The only problem here is that the hotels are expensive.  They are using dollars. But I’m ok.
Moise is also ok. I’m taking care of him.
Here {is a picture} we took together on arrival and during discussion.
Evans 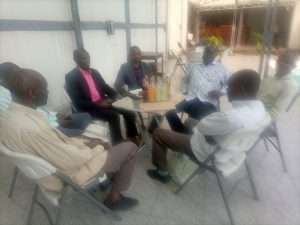 The Congo looks to be another door that is being opened for us (cf. Revelation 3:7-8).

Please pray for the safety and success of this trip.

Bill Gates called for more censorship of health information on the internet and has declared that a pandemic worse than COVID-19 is coming (see The “next pandemic” is coming, says Bill Gates, who says more censorship needed to “moderate some of the insanity online”). He is correct that a worse pandemic is coming (cf. Revelation 6:7-8). The Bible also warns, about “avoiding profane and vain babblings, and oppositions of science falsely so called” (1 Timothy 6:20, KJV)–yet many claimed to be following science related to COVID while they suppressed true information–and suppression of the truth was also warned of in scripture in Romans 1:18.

That said, the World Economic Forum has been meeting in Davos, Switzerland–with participants there, as well as USA Congresspersons, wanting to suppress and criminalize spreading information of various sorts (see WEF speakers want more censorship, while Elon Musk tweeted ‘WEF is increasingly becoming an unelected world government that the people never asked for and don’t want’). We continue to see more and more calls for censorship, which one day will result in the prophesied famine of the word (Amos 8:11-12) as well as murderous persecutions (cf. Daniel 7:25, 11:33-35; Revelation 13:15; watch also our latest sermon video Christian Persecution from the Beast).

In this post-Brexit world, along with Russia’s ‘special military operation’ into Ukraine, a recent survey found that less people in Europe want their countries to leave the European Union (see Support for leaving EU has fallen significantly across bloc since Brexit’). There will be other factors in the future that will drive Europe more together–and it will then reorganize and turn power over to a dictatorial leader called the Beast (Revelation 17:12-13). Steps towards this keep occurring.

In the British-American dominated areas of the world we continue to see more and more “official” moves away from the morality of the Bible (see Church of England blessing sexual immorality, Canada moving against scripture, and the USA the biggest promoter of childhood mutilizations) with numerous leaders promoting behaviors that the word of God says result in death of the participants as well as those who approve such behaviors (Romans 1:18-32). We also continue to see steps from Gentile nations to push aside the USA dollar (see Iran and Russia looking to bypass the ‘petrodollar’ with gold-backed crypto-currency; China, Saudi Arabia and the ‘petroyuan’)–ultimately, this will lead to massive economic and other problems for the USA.

Many of the so-called educated have claimed many fraudulent positions related to the Bible. Many have suggested that the biblical David was a myth. Now, notice the following cover:

Here is a link to that July-September 2017 edition of Bible News Prophecy magazine. Its front cover shows the ancient Tel Dan Stele which also mentions King David, and the associated article contains more information about why true science supports the Bible. In addition to that, there is a new archeological report which concluded that something called the Mesha Stela also referenced the house of ancient King David (see Mesha Stela declared to mention ‘House of David,’ hence is additional proof of the biblical text). Despite naysayers that assert that people in the Bible such as Joshua (watch Did Joshua of the Bible Exist?) and David did not exist, there is evidence out there for those willing to believe the truth.

Yes, we can (and should) rely on the word of God.

21 But now the righteousness of God apart from the law is revealed, being witnessed by the Law and the Prophets, 22 even the righteousness of God, through faith in Jesus Christ, to all and on all who believe. For there is no difference; 23 for all have sinned and fall short of the glory of God, 24 being justified freely by His grace through the redemption that is in Christ Jesus, 25 whom God set forth as a propitiation by His blood, through faith, to demonstrate His righteousness, because in His forbearance God had passed over the sins that were previously committed, 26 to demonstrate at the present time His righteousness, that He might be just and the justifier of the one who has faith in Jesus.  (Romans 3:21-26)

8 though He was a Son, yet He learned obedience by the things which He suffered. 9 And having been perfected, He became the author of eternal salvation to all who obey Him, (Hebrews 5:8-9)

Brethren, not only are we to obey, we need to have faith and live a life of faith.