Last Sunday, I made available my latest book, Biden-Harris: Prophecies and Destruction, for free on Amazon Kindle to all of you in a special email.

The Kindle version of Biden-Harris: Prophecies and Destruction hit number 1 in two small categories according to Amazon reports on Monday, Tuesday, and Wednesday:

So, we seem to have reached some already with this release of the book.

Anyway, the release had a few typos (like I transposed 2031 as 2013 in one place)–but once we realized that, it was too late to stop the promotion. I apologize for making the typos (which I fixed yesterday, plus added a few more scriptures)–they are expected to be corrected at Amazon next week as it was not practical to do it this week because of the free Kindle book announcement (which expires today: Biden-Harris: Prophecies and Destruction: Kindle edition).

That being said, the reason that the book was released before a second edit was basically for timing. Two former WCG ministers, who run their own churches, declared that Donald Trump would remain in office and not be replaced by Joe Biden. Yesterday again proved they were false prophets (see Biden-Harris Inaugurated: Gerald Flurry and Don Billingsley again proven wrong).

Furthermore, since various ones affiliated with the Church of God have been overly focused on various scenarios that would keep Donald Trump in office, it seemed that releasing the Biden-Harris book would hopefully help change the focus of some of them. While it is not that it is impossible for Donald Trump to again by the President of the United States, that is not something we as Christians need to focus on.  Neither Joe Biden nor Donald Trump are what America needs. The USA needs national repentance. One of the scriptures that I added to the book yesterday (that I thought I had in it earlier) was:

5 … But the Assyrian shall be his king, Because they refused to repent. (Hosea 11:5)

Yes, a modern day descendant of Assyria (central European/German) will lead the forces that will take over the USA in the future (Isaiah 10:5-12; Daniel 11:39). Because the USA is not going to repent as a nation, that will happen no matter who occupies the White House.

Now as Christians, our focus is generally on the fact that the Kingdom of God is coming soon as Jesus said to seek that Kingdom first (Matthew 6:33).

The recommended sermonette for this Sabbath goes into some speculative details, consistent with historical Church of God beliefs, as to when the end will come (watch Is the USA prophesied to be destroyed by 2028?). The end of the USA is coming fairly soon.

Travel to Australia? Feast of Tabernacles 2021?

It was our intent that either:

However, shortly after our discussion, an announcement by a health leader in Australia suggests that this is basically impossible (see Germany looking at lockdown extensions, Australia may remain closed until 2022, and Biden-Administration pledging to not allow European travel).

Furthermore, the restrictions that are in place do not look like there are any current exemptions to make it possible to go to Australia for religious purposes.

Unless it soon changes, it looks like Joyce and I or Sasha will not be able to go to Australia in 2021.

Therefore, for the Feast of Tabernacles, we suspect that, at most, we may be able have some type of video site in Australia in 2021.

Additionally, we plan to start to take steps to look for a Feast of Tabernacles’ site in the USA. We expect this will be somewhere between New Mexico and Tennessee.

While we do expect to have a USA site in 2021, it may be that the announcement of such a site may be delayed for some time as COVID-19 blamed restrictions change frequently.

But we may have to delay knowing some locations, and may (like we did last year) have a backup location plan in the USA in case of last minute government restrictions (there also ended up being a last day change in the Philippines last year).

We also have mailed annual contribution receipts to those in the USA who donated and provided a mailing address in 2020.

That being said, some have wondered how the US office of the Continuing Church of God spends the funds it received.

So, this seemed to be a good time to explain. 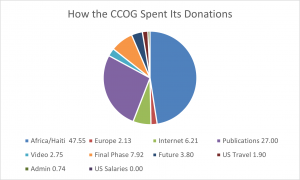 Yes, most of our money goes to support the physically and spiritually poor as we work to fulfill Matthew 24:14, Romans 11:25, the Ezekiel Warning, and Matthew 28:19-20.

Here are some longer explanations of each of the categories:

The vast bulk of CCOG funds are spent to preach, reach, and teach, with nearly all the rest to support the poor and widows. It appears that never before in Church of God history have so few helped so many with so little for so long in order to have the impact that the Continuing Church of God is having.

We strongly believe that whatever you send is well spent to support the Philadelphian remnant as we work on Matthew 24:14 and Matthew 28:19-20 while we strive to be ready for the short work and our part in the final phase of the work.

Please pray that we will have more laborers for the harvest (Matthew 9:38) as we push forward in the 2020s.

Germany and Austria have been to extending COVID-19 lockdowns, even though two studies suggest that they are not the right approach (see Austria extending lockdowns, Stanford study says they do not work, WHO says they are a horrible idea and Germany looking at lockdown extensions, Australia may remain closed until 2022, and Biden-Administration pledging to not allow European travel).

8 But, beloved, do not forget this one thing, that with the Lord one day is as a thousand years, and a thousand years as one day. 9 The Lord is not slack concerning His promise, as some count slackness, but is longsuffering toward us, not willing that any should perish but that all should come to repentance. (2 Peter 3:8-9)

Yes, brethren, God has a plan. It is a loving plan. And it is coming to pass. And yes, some of the time is needed for us to develop character to be what God knows we can be.