Dear Brethren and co-workers in Christ:

While much of North America dealt with severe cold weather this week, we dealt with a lot of rain in Rome and Vatican City.  This is the first trip in a long time where I personally have had to fight ‘jet lag.’  We are to return to the USA late on Sunday, and hopefully ‘jet lag’ will not be an issue upon returning as next week is fairly packed, and also has additional projects related to the calendar year-end to deal with.

There has been a change in Vatican City.  On three occasions, we were told to stop videotaping while we were there.  First, we were told that the use of tripods in St. Peter’s Square, was not allowed.  But we were done there, so that was not a problem.  Then we were told we could not use one inside of St. Peter’s Basilica–and that was a problem.  Then we were told that while we could video, if too much of the video camera time was pointed at me, that was also not allowed.  Anyway, since they had none of those restrictions on us last June, it makes me wonder if someone there was less than pleased with the videos we put up at our YouTube channels about the Vatican.

Because we suspected that we would not have access to high upload speeds here, we decided a couple of weeks ago that this would be the right time to show a video we put together when I was in Israel a couple of months back.  We should be able to put the Vatican City related sermon together next week and make it available next Sabbath.  When away from the Five Cities area of California, we often have ran into internet limitation issues, and have attempted to plan accordingly.

While in Southern Europe, in addition to taping the sermon and conducting historical, prophetic, and other research, we also spent time on African matters, website updates, and literature issues.  We are getting more support requests from small congregations in Kenya, and we are trying to see if we can handle them and other needs there.

On a societal note, we were bothered by at least three pickpockets in the Metro (subway) in the Rome area.  It is a bit disconcerting to notice someone putting their hand in your pocket to attempt to steal from you.  While none of the pickpockets were successful, apparently they are too common to be arrested.  I felt like explaining the way of give vs. the way of get to one young one, but as I did not know Italian, I basically attempted to discourage him in English.  In God’s kingdom, we will not have to worry about those who wish to take like that.

The graphics’ company ended up producing the Bible News Prophecy magazine  with the wrong page numbers on the Table of Contents page for the January-March 2014 edition in English.  They made this error originally, I notified them of it, they corrected it, yet used the wrong file for printing the magazine.  My apologies to all.  I hope to send a letter to subscribers about this and one or more editing issues later this month.

On a positive note, we did get our magazine translated into the language of Kiswahili, got it laid out in a magazine format, and made it available online.  It is also to be printed in Kenya to assist those in Kenya and Tanzania as many (especially in Tanzania) prefer Kiswahili to English (as not all know English).  A Kenyan leader who reviewed it was impressed with the high quality of translation work that George Lemi of Tanzania was able to do for us with this. 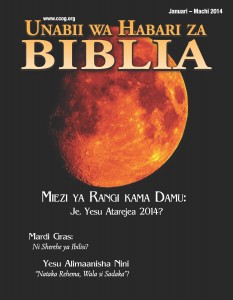 Those who would like to view it, can click on the following pdf. link: UNABII WA HABARI ZA BIBLIA: Jan-March 2014

Statement of Beliefs in Mandarin Chinese and Spanish Items

We have gotten our Statement of Beliefs translated into Mandarin Chinese!  Here is a link:  继续神的教会的信仰声明

We now have more visitors to our websites from China than any country other than the USA.  A year ago, we had relatively few article views from China (about 3,000 per month), and in the past couple of months the viewership has gone way up (over 80,000 article views per month).

Our Statement is also available in Kiswahili, Tagalog, and Spanish.  A version is also in process in Telugu and Jingpho.  The Continuing Church of God has a rather long statement of beliefs and it serves to not only highlight some of our beliefs, but also to partially explain God’s plan of salvation, the gospel of the kingdom, and why the Continuing Church of God truly is continuing the original doctrines of the New Testament era Christians.

Some changes were made to the Spanish-language website (http://www.cdlidd.es/) in order to make it easier for people to see the articles and news items.  This will take a little bit of time to be complete, but the couple of changes we made this week should help.

Karl-Theodor zu Guttenberg had an article published this week.  Basically, in the article he mentioned that the USA is giving up its position to lead the world, Russia’s Vladimir Putin is attempting to fill in the gap, and that Europe needs to rise up and handle its own affairs (see Karl-Theodor zu Guttenberg writes about Vladimir Putin, Europe, and the USA).  Karl Guttenberg is one that I have been watching for over 4 years as a possible candidate to be the final Beast/King of the North of Bible prophecy (see Might German Baron Karl-Theodor zu Guttenberg become the King of the North?).  He is getting his views out there and is one that the Europeans may decide to turn to in the future.  It is very likely that there will be civil unrest in parts of Europe, and it may take a militaristic leader (Baron Guttenberg was once the Defense Minister for Germany) to help bring Europe together after various types of crises.

Over in the USA, someone sent me a link to an article that pointed out that more Americans profess belief in aliens from outer space than profess that Jesus is the Son of God (see More Americans profess belief in UFOs than Jesus being the Son of God).  This may help explain why the USA is more and more willing to move away from biblical standards of morality.

If your internet connection is still too slow (as my home one is) and/or you prefer audio messages to audio-visuals ones, go to the YouTube link for the message, click on SHOW MORE related to the description. You will then see something that says, “Download MP3.” Below that is a link to an MP3 file. Most computers (and even some cellular telephones) will allow MP3 files to be downloaded and played. So, this is an option we have made available (but we are also looking into ways to improve that as well).

The world and most in the COGs seem to not have the zeal of the love of the truth that they should have.  Notice the following from the Apostle Paul:

Brethren, have the love of the truth and meditate that which has virtue, as we strive to get the truth out to those who have ‘ears to hear’ (Matthew 11:15).