On Tuesday we had a baptism in Grover Beach. 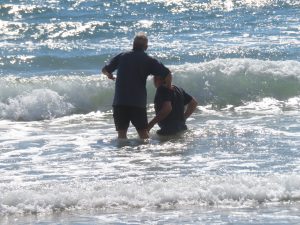 After the baptism we went out to dinner. 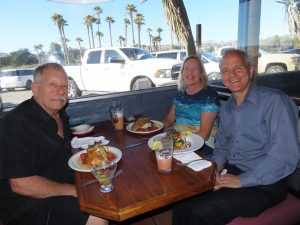 So, we, too, should also rejoice.

Since I moved to the central California coast in 1976, this is only the second baptism I am aware of in the Church of God in the Five Cities area that was done in the actual cold Pacific Ocean. Mine was the first back in 1977, and that was during much colder and overcast weather in Pismo Beach (which is about 1.5 miles north of Grover Beach) earlier in the year.

This was not nearly as cold, which pleased both myself and Alan Garner.

Greetings from Malawi and Mozambique brethren

Our book, Hope of Salvation: How the Continuing Church of God Differs from Protestantism, lists 28 differences that we have from the SDAs. Those who believe the Bible will see why the CCOG’s differences are more in line with scripture.

As mentioned in an earlier Letter to the Brethren, we have been working on increasing our radio presence, both online and through more traditional broadcast media.

We are now on AM radio in Europe, as well as on a shortwave radio station that targets Europe, North Africa, and parts of the Middle East on European Gospel Radio (EGR). Although shortwave is not used much in North America, it reportedly has hundreds of millions of listeners around the world.

As mentioned a few weeks ago, we should, for the time being, be relatively uncensored so we can proclaim the coming Kingdom of God and other biblical truths over the air from Europe.

For the first broadcast, Steve Dupuie and I did an introductory radio item, which is also the recommended sermonette for the week:CCOG on European Gospel Radio.

Elder Veljic reported that he covered the following on his three broadcasts:

I covered three topics.  1. The pope’s comments on the war in Ukraine, where he said it might have been actually provoked.  2. Abortion and how the abortion protagonists accuse Christianity of fascism. 3. Belgium, Luxembourg and Prophecy.

I would like to give a special thanks to Bill Wedekind for the “behind the scenes” assistance he provided to get the radio broadcasts properly uploaded to EGR.

As mentioned before, we also have a media presence in Ghana.

Pastor Samuel Ofosu wrote this week that we are on radio and television on two stations in Ghana in the language of Asanti Twi.

The above station also live streams the radio broadcast onto television.

The above station also live streams the radio broadcast onto television.

Radio is a proclamation door that we use to reach those we otherwise would not reach.

Jo Anne Buchanan sent the following related to her husband:

Hi Dr. Thiel,
Doc is doing so much better!  He is eating well and getting stronger.  His mental state is improving somewhat, but still has no short term memory.  He can carry on a conversation, but will often forget what he was saying mid sentence.  He still has some twinges of pain in his ribs, but is usually  comfortable.
We have to go to the states … for Dr.s appts.  Doc is questioning whether he is strong enough to go, but I really want our primary care Dr. to see him.  We have been going to her for about 20 years and she knows us. I think he can do it, but I will get a wheelchair for him.  We would sincerely want your prayers for an uneventful trip and that Doc will be able to withstand the travel.
Kindest regards,
Jo Anne

Please keep the Buchanans in your prayers.

Elder Aleksandar ‘Sasha’ Veljic has been filling in for Doc’s counseling role during Doc’s recovery.

For the first time in years, CERN’s Large Hadron Collider was scheduled to start up again on Tuesday (see Large Hadron Collider discovered three exotic particles and restarts today: Any prophetic or military ramifications?). The CERN project, as perhaps still the largest physics project in the world, is likely to spin off technologies with military potential. With Germany greatly increasing its military spending, this also points to military potential for this project consistent with prophecies such as Revelation 13:3-4 and Daniel 11:39.

The USA reportedly has had at least 309 mass shootings (those are incidents involving at least four shot/killed) this year, counting the one in Highland Park, Illinois (see Highland Park, Illinois is 309th mass shooting this year in the USA, Philadelphia has shots, and ‘the city is full of violence’). The Bible warns, “the land is filled with crimes of blood, And the city is full of violence” (Ezekiel 7:23)–this appears more and more to be an apt description of the USA.

7 “And to the angel of the church in Philadelphia write,

‘These things says He who is holy, He who is true, “He who has the key of David, He who opens and no one shuts, and shuts and no one opens”: 8 “I know your works. See, I have set before you an open door, and no one can shut it; for you have a little strength, have kept My word, and have not denied My name. 9 Indeed I will make those of the synagogue of Satan, who say they are Jews and are not, but lie — indeed I will make them come and worship before your feet, and to know that I have loved you. 10 Because you have kept My command to persevere, I also will keep you from the hour of trial which shall come upon the whole world, to test those who dwell on the earth. ‘ (Revelation 3:7-10)

Radio is one of many “doors” that are now opened for us.

To see more of the “doors,” check out the CCOG Multimedia page.