Greetings from the Five Cities from Grover Beach, California.

My wife Joyce and I have been planning for the Spring Holy Days here, including Passover, the Night to Be Observed., and the Days of Unleavened Bread.

If you are planning on being in our area for any of those events, please email me at COGwriter@aol.com

Passover services are to be held the evening of April 14th after sunset all around the world.

The Spring holy days are almost upon us.

Before getting to more about that, do you know why April 1st is observed as April Fool’s Day by various ones in the world?

Here are a couple of accounts:

The origins of April Fools’ Day are shrouded in mystery, experts say.

The most popular theory is that France changed its calendar in the 1500s so that the New Year would begin in January to match the Roman calendar instead of the start of spring in late March or early April.

However word of the change traveled slowly, and many people in rural areas continued to celebrate the New Year in the spring. These country dwellers became known as “April fools.”

Boese, who has studied the holiday’s origin, disagrees with that interpretation.

“[The French] theory is completely wrong, because the day that the French celebrated the beginning of the year legally was Easter day, so it never really was associated with April first,” he said… http://news.nationalgeographic.com/news/2008/03/080328-april-fools.html

“April Fool’s Day. The first mention of this custom is a curt note in Aubrey: ‘Fooles holy day. We observe it on ye first of April. And so it is kept in Germany everywhere.’ ( Aubrey, 1686, 1880: 10). It must have reached England from Germany or France in the mid-17th century, and quickly became very popular under the name All Fools’ Day; 18th-century writers call it ‘universal’.” [English writer John Aubrey ?] – Oxford University Press 2000 http://www.encyclopedia.com/doc/1O71-AprilFoolsDay.html

“There are several explanations for the origin of April Fools’ Day, but here is the most plausible one. April 1st was once New Year’s Day in France. In 1582, Pope Gregory declared the adoption of his Gregorian calendar to replace the Julian calendar and New Year’s Day was officially changed to January 1st. It took awhile for everyone in France to hear the news of this major change and others obstinately refused to accept the new calendar, so a lot of people continued to celebrate New Year’s Day on the first of April – earning them the name April fools. The April fools were subjected to ridicule and practical jokes and the tradition was born. The butts of these pranks were first called poisson d’avril or April fish because a young naive fish is easily caught. A common practice was to hook a paper fish on the back of someone as a joke. This evolved over time and a custom of prank-playing continues on the first day of April.” – Dictionary.com by Lexico Publishing Group http://dictionary.reference.com/features/aprilfools.html

So there are a few theories about where “April Fools’ Day” originated.

But, basically because the Roman calendar was adopted, those who had accepted the more traditional (and biblical) notion that the year began in the Spring were made fun of.

Depending on the year, the first day of the year that God is referring to comes in March or April in modern calendars.

The Bible also refers to the first month of the year with the name Nisan (Nehemiah 2:1; Esther 3:7). The Passover and biblical holy days (some of which are also this month, see Holy Day Calendar) are based upon the calendar that begins on Nisan 1.

Historically calling people fools because they did not change the biblical beginning of the year from Spring to January 1st, apparently did not help people realize when the BIBLE teaches that the year is supposed to begin.

However, unlike most others, now you know.

When speaking of the Hebrew month of Abib/Nisan God declared:

2 This month shall be your beginning of months; it shall be the first month of the year to you” (Exodus 12:2).

But most people do not realize that is what God’s word taught.

While it is rare to actually align with April 1st, after sunset on April 1 will begin the first day of the year on God’s calendar in 2022.

The first month of the sacred year has various biblical observances.

For example, Passover will be after sunset on April 14th.

The Night to Be Observed is the following evening. Which also begins the Days of Unleavened Bread.

It is foolish not to know what season God begins His year.

We plan to have another set of youth camps in Kenya during April (consistent with Malachi 4:6).

So, eight baptisms would be eight times the rejoicing :).

Hopefully to be received prior to Passover for most of our subscribers, we mailed out the latest edition of our  Bible News Prophecy magazine. 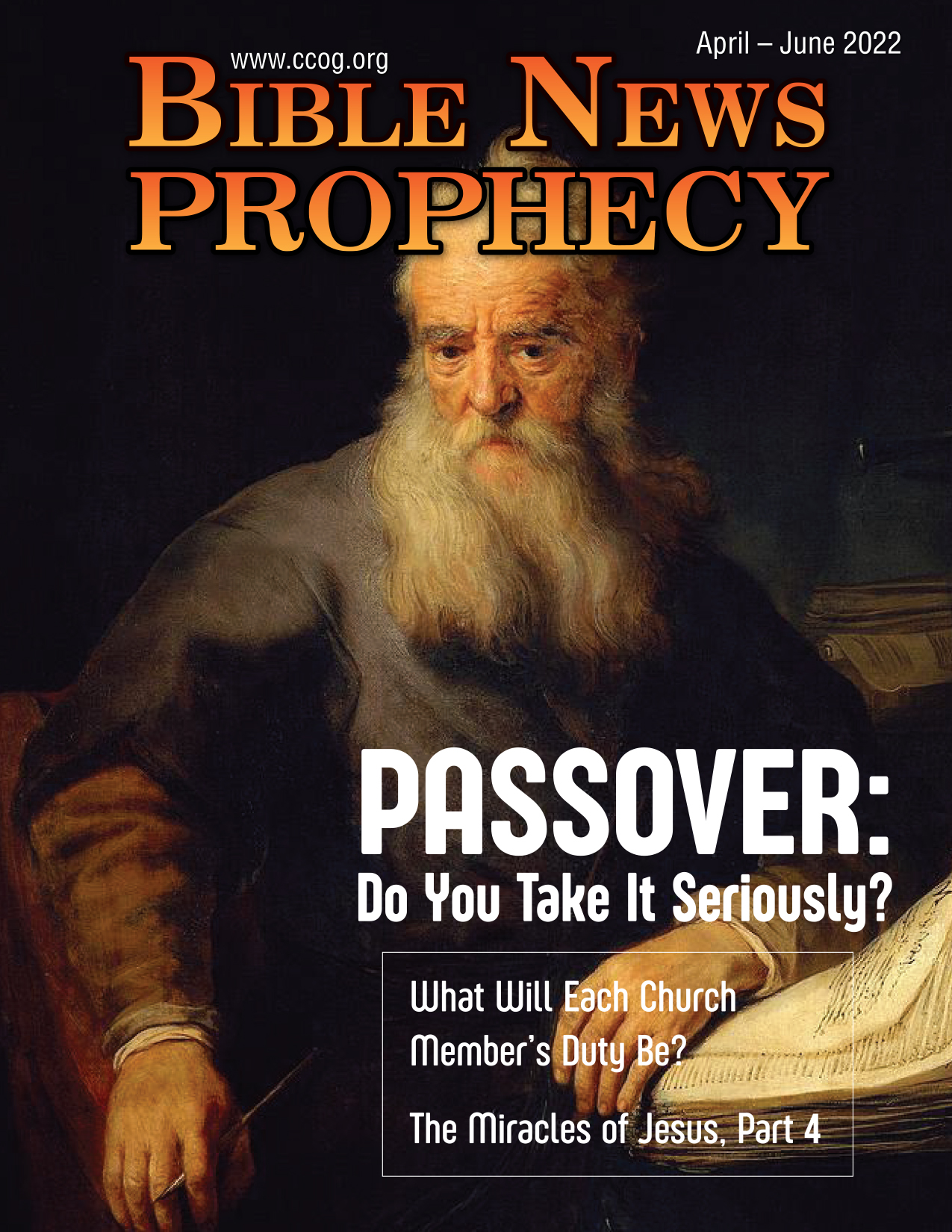 Here is a link to the April – June 2022 edition of Bible News Prophecy magazine.

From the Editor: Passover: Do You Take It Seriously? Passover is coming up soon. Have you been examining yourself?

What Will Each Church Member’s Duty Be? This is from the late Dr. Herman Hoeh of the old Radio & Worldwide Church of God.

Study the Bible Course, Lesson 21: Human Nature What about carnal human nature? What does the Bible teach about it?

Is God Calling You? Looking at Scriptures in this article may help you answer that question.

The Miracles of Jesus, Part 4: Feeding the 5000. An article directed towards our younger readers and those who needed to be read to.

Here is a link to the April – June 2022 edition of Bible News Prophecy magazine.

Various aspects of the LGBTQ+ agenda continue to be in the news. While there are some partial setbacks, the trend and what those pushing that agenda want is not good (see ‘American Parents Should Be Angry As A Raging Bull: The Full-Scale Indoctrination Of Our Children Into A ‘Bizarro Cult World Gone Mad’ Is Being Ramped Up Even Higher’). A top level executive at Disney, a company that tends to target children and families, claimed that Disney intends to have half of its characters to be LGBT or part of ethnic minorities (see NP: Disney President Admits ‘Not-So-Secret Gay Agenda’, Vows HALF of Disney Characters Will Be LGBT). While increasing minority representation may be a fine goal, increasingly attempting to “normalize” sexually immoral behavior is not. Last year, on March 31, 2021, US President Joe Biden put out a proclamation in support of Transgender Visibility Day. He again spoke in favor of it and today intends to change USA passports to have gender listed as “X” option instead of male or female (see VOA: Biden to Mark Transgender Day of Visibility With New Actions)–this is in conflict with scripture (e.g. Matthew 19:4). As Christians we are not to be involved with nor promote sexual immorality nor to approve of it (cf. Romans 1:24-32).

Food shortages are appearing in Ukraine (see WFP Says Food Becoming Harder to Find in Ukraine’). One of the consequences of the military conflict in Ukraine is increased prices for oil and decreased production of food. As it turns out many Arab nations get substantial amounts of grain from Ukraine. Since crises will occur prior to the rise of the coming King of the North, expect that various crises will help lead to the rise up of the prophesied King of the South (see Could the Ukrainian food crisis help lead to the rise of the King of the South?), who looks to be a leader of Arabic descent.

Because of Western sanctions, Russian President Vladimir Putin is pushing more publicly away from the USA dollar (see ‘Russia’s Putin declares an end to Western currencies, says world moving towards “real reserves” including “land, food, gold”’). Although Russia, on its own, cannot make that happen, the time will come when the USA dollar will be worth no more than its scrap or collector value.

With Vladimir Putin being in the news so long, it is of no surprise that false prophets have made wrong predictions related to him (see Vladimir Putin: Lord of the world? Prince of Rosh?). The Apostle Peter warned of some who came out of the church who would be false (2 Peter 2:1-3). We need to be diligent and as the Apostle John wrote related to prophets “test the spirits” (2 Peter 2:1-3). Brethren, we have NOT made the prophetic errors that many who claim to be Church of God have (see also Do You Hold to Any of These Laodicean Prophetic Errors?).

Brethren, in the Continuing Church of God, “have also a more sure word of prophecy; whereunto ye do well that ye take heed, as unto a light that shineth in a dark place, until the day dawn, and the day star arise in your hearts:” (2 Peter 1:19, KJV).

The Book of Leviticus teaches the following:

Brethren, these days are almost upon us in 2022.

Prepare for them (see also Examine Yourself before Passover).