Two weeks ago, we reported that BitChute had been deplatformed for a time (see Letter to the Brethren: November 5, 2020). Late last week, Brighteon sent the following email:

Brighteon experienced significant outages over the last two days due to DDoS attacks. You may also recall that YouTube went down yesterday due to unexplained problems, and some people suspect there are core internet infrastructure components which are either failing or being taken over.

I want you to know that we have restored Brighteon service (as of last night) and we have added additional layers of anti-DDoS protection as well as server hardening strategies to help keep Brighteon online.

What’s really happening right now is that Brighteon is emerging as one of the few remaining places where truthful videos about the 2020 election in the USA can be posted and viewed. Some of those videos are getting widely shared and viewed. The powers that be — the Big Tech consortium … and … actors who hate America — don’t want anyone to be able to view those videos.

So we are being attacked with a variety of well-funded, weaponized systems.

So, we have had two of our platforms impacted by “Big Tech” because both of those platforms allow for more freedom of political (and religious) speech.

Brighteon plays our Bible News Prophecy videos (https://www.brighteon.com/channel/ccogbnp). Like BitChute, but unlike YouTube, Brighteon does not put up official disclaimers if we cover subjects they may not agree with.

As we have written before, inappropriate censorship is one reason that we are on multiple platforms. A famine of the word is prophesied (Amos 8:11-12) and as I have written for years, it will involve internet or similar censorship.

Evangelist Evans Ochieng went to Malawi to meet with church leaders from there as well as neighboring Mozambique. This was the first trip we have sent anyone to Malawi since the COVID restrictions went in place throughout Africa.

There were issues he and I felt needed to be addressed. Including dealing with a couple of people who had been trying to stir up trouble. 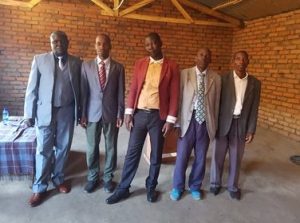 Here is a slightly edited version of what he sent me on Sunday:

Greetings from Malawi.
I arrived Malawi safe. The trip was fine except the flight could not manage to reach Blantyre due to covid 19 cases. So we landed in Lilongwe.  And from Lilongwe to Migowi is a long trip by road. We arrived Migowi at midnight and I was very tired. But the trip was fine.
On Friday I had a meeting with all leaders from Malawi and Mozambique which lasted for 8 hours. The meeting was tough because I wanted to know exactly the problems in Malawi and Mozambique which makes the work not move proper and what brings the conflicts. We discussed a lot and at long last XXXXX repented from the bad letters he has been writing and has no truth in them. I also talked with XXXXXXX who wanted to bring divisions in the church. Everything went well and everybody came out when happy. So we solved all the problems. And the work is now {looks to be set to move ahead} but I will still supervise if there is a total repentance. Mulozowa now has peace and he is happy.
Yesterday I kept Sabbath in Migowi with all leaders from Malawi and Mozambique. I gave some mattresses to some poor widow brethren and today I’m going to give six congregations money to start chicken projects. Five are from Mozambique and one from Chiringa Malawi. I’m also going to supervise {check the progress of} all the projects in Malawi right now. I will let you know what’s going on in the projects.
Evans

Note that we did NOT have to mark anyone.

Evangelist Ochieng sent the following, slightly edited by me, on Monday:

Greetings from Malawi and Mozambique. With a short time I’ve been staying in Malawi and Mozambique, we have done a lot of things. I managed to start the processing of the church registration in Mozambique after when XXXXX failed to do it. …. So I took another step of pointing mpinji to be a new representative in Mozambique to go and do the registration. Mpinji is having national identity of Mozambique while XXXXX did not have.  Mpinji is a trusted man and he is going to do a good job according to the statement given by our brethren from Mozambique.  Again I started new projects of chicken to six congregations. 4 congregations from Mozambique.  These are Nasiyaya, muguliwa, Domasi, Nagaga. And in Malawi I gave 2 congregations. These are Chiringa and Mwanza. Domasi is lead by Edison mkwate with 39 people.  Nagaga is lead by James Rabson with 32 brethren. Nasiyaya is lead by Laston Musoda with 65 brethren.  Muguliwa is lead by Manuel Fasani with 35 brethren.
And in Malawi, Chiringa is  lead by John ukulele with 18 brethren. Mwanza is lead by  John Machemba with 122 brethren.
I also appointed John Machemba and Likuva Luis to help Molozwa looking the projects and irrigation and the work in Malawi.
The meeting was successful and bears more fruits that brought total peace in Malawi and Mozambique. After that  I met {a former CCOG leader} with his family.
Yesterday I went around to supervise the old chicken projects in Malawi and found that they are not doing very well because of poor management. So I advised them on what to do so that they can have  a good result.
I also talked with those who are writing falsely letters  to accuse brethren that it is not good behaviour, so they should stop doing such things. In my findings of the leadership in Malawi,  Radson Mulozwa Radson is not leading another church apart from CCOG as per their writing. It was a false statement.
The total members in Malawi are 804 and Mozambique are 281. I will come back soon to confirm the projects in Malawi and Mozambique and registration. I told them to work hard on the projects and irrigation so that they can get what can improve their standard of living. I will make sure that the projects in Malawi and Mozambique are well maintained.
The hall in Malawi needs 25 bags of cement to be completed. I expect to come back soon to Malawi and Mozambique.
Evans.

Anyway, as far as the chicken projects go, we are trying to assist people in Kenya, Malawi, and Mozambique be able to raise more of their own food and to provide the ability of some to improve their income. We started a few projects earlier this year, but wanted to wait several months to see how it went before starting others.

Additionally, while in Malawi, Evans Ochieng also brought more CCOG literature. He was supposed to return to Kenya yesterday, but because his COVID-19 test was then considered to have expired, he had to have another test and hopefully will be able to return home early next week.

This was a tough trip for him, so please pray for him, his wife Rosemary, and the rest of his family.

Last week, we announced that Joyce, David, and I had expected to be in Southern California tomorrow. But that has been cancelled, so we will not have a service there at this time.

US Supreme Court Justice Alito expressed concerns about the ‘constitutionality’ of various COVID-19 restrictions in the USA (see NBC: Justice Alito calls Covid restrictions ‘previously unimaginable’, cites danger to religious freedom; LR: Fauci Versus Frontline Doctors and Science: Pandemic Malpractice). Though some warn against such restrictions, various politicians wish to implement more of them (see CNBC: Coronavirus updates; Ron Paul: Will Biden Listen to the Science?). Totalitarian controls are being set up around the world and most certainly will not be limited to the USA (cf. Revelation 13:16-18).

Partially because of fallout from COVID restrictions, the United Nations seems to feel that there will be more food shortages next year. While we cannot physically resolve that, it is our hope that various projects we have had involvement with this year will help food production for our brethren in several nations (see ‘Nobel UN food agency warns 2021 will be worse than 2020’ ‘CCOG has been taking steps’).

While the West has been focused on COVID and the USA presidential election, 15 nations of the East and South Pacific agreed on what is being called the world’s largest trade block (see ‘Asia-Pacific nations sign world’s biggest free-trade agreement’). This block does not include the USA, but does include Australia and New Zealand. The agreement is believed to be a major plus for China. Ultimately, Australia and New Zealand will not do well, despite this deal (cf. Daniel 8:24-25), though they hope it will help them now (which it probably will) and later (which eventually it will not).

It is believed the following was from a prayer of Moses:

13 Return, O Lord!
How long?
And have compassion on Your servants.
14 Oh, satisfy us early with Your mercy,
That we may rejoice and be glad all our days!
15 Make us glad according to the days in which You have afflicted us,
The years in which we have seen evil.
16 Let Your work appear to Your servants,
And Your glory to their children.
17 And let the beauty of the Lord our God be upon us,
And establish the work of our hands for us;
Yes, establish the work of our hands. (Psalms 90:13-17)

Throughout history, God’s people have wondered “how long?”

But notice that we are to be glad now, despite our afflictions.