Tonight (8:00 pm PDT) I am scheduled to have a recorded interview by Rob McConnell for his X zone radio program that comes out of Canada (it is to be aired later, perhaps tomorrow). I have been on the program four times over the years. The last time, the interview was a bit tense as I covered certain biblical topics some do not want to hear. Anyway, I am to talk about my Biden-Harris: Prophecies and Destruction book, and so prophecies, particularly some that affect the USA, are expected to be discussed.

Pastor Samuel Ofosu Gyeabour sent the following photo and report related to the Feast of Tabernacles in Ghana:

Celebrated under the theme:: *THE ESSENCE OF LOVE*

At the venue of “Daniel’s Christian Center” – Kumasi, the General Overseer (COG7) – Ghana, Pastor Samuel Ofosu Gyeabour, outlined the relation of God’s Love to Mankind and what, how and why we should practice same, vividly spelt in I Corinthians Chapter “13” through as Children of God awaiting our Sonship adoption by Jesus Christ in His second revealing *First Resurrection of the Saints as Firstfruits of the Earthly Remnant Harvest*

It was a well driven message to the congregation and its impact very eminent to every faithful individual.

Though attendance wasn’t the fullest due to COVID – 19 related issues and it’s effect on Students in Schools, the venue was very peaceful with no casualty and prayer inward.

The climax of the Feast was the Women’s Fellowship drama entitled ” THE VIRTUOUS WOMAN”, where they thrilled the congregation to a “lesson learning” laughter night to be very *mindfully of our marriages*

The Last Great Day, obviously marking the finality and fulfilment of God’s Plan of Salvation was exclusively remarkable to say the least.

In totality, it was an enlightening experience of what the Kingdom of God shall be, our transformation and how it shall be revealed, the very moment and expectation every true believer awaits whether dead or alive.

We’ve all reached our destinations safely and hope to see our blessing manifestation.

We can’t close this Chapter without acknowledging Pastor Dr. Bob Thiel and the CCOG for the support they gave us to Celebrate the Feast.
May God t bless you more.

So, despite issues, the festival in Ghana looks to have been successful.

Joe Lumpay reported that there were health and other challenges in the Philippines related to the Feast of Tabernacles.

He also reported that there were four baptisms.

He sent the following photos of those who attended the baptism and those that were baptized: 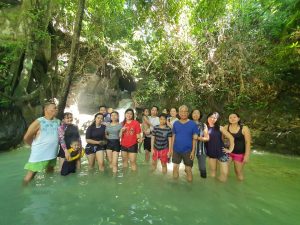 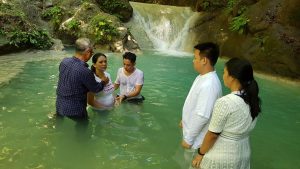 Despite trials, we also have triumphs to rejoice.

Even the angels in heaven reloice such as Jesus said:

8 “Or what woman, having ten silver coins, if she loses one coin, does not light a lamp, sweep the house, and search carefully until she finds it? 9 And when she has found it, she calls her friends and neighbors together, saying, ‘Rejoice with me, for I have found the piece which I lost!’ 10 Likewise, I say to you, there is joy in the presence of the angels of God over one sinner who repents.” (Luke 15:8-10)

So, four baptisms would be four times the rejoicing :).

The world will observe various days the next 3 months or so which are not biblical, but come from paganism.

God clearly teaches that He does NOT want pagan practices used to worship Him:

29 When the Lord your God cuts off from before you the nations which you go to dispossess, and you displace them and dwell in their land, 30 take heed to yourself that you are not ensnared to follow them, after they are destroyed from before you, and that you do not inquire after their gods, saying, ‘How did these nations serve their gods? I also will do likewise.’ 31 You shall not worship the Lord your God in that way; for every abomination to the Lord which He hates they have done to their gods; for they burn even their sons and daughters in the fire to their gods. 32 Whatever I command you, be careful to observe it; you shall not add to it nor take away from it. (Deuteronomy 12:29-32)

Those who combine pagan worship practices with biblical ones obscure God’s plan of salvation and generally do not understand it.

Paul specifically condemned incorporating pagan practices with biblical observances (1 Corinthians 10:20-23). Paul himself stated near the end of his life that he kept all the practices Jews needed to keep (Acts 28:17-19; cf. Acts 21:18-24) and that would have had to include all the holy days listed in Leviticus 23.

As a rule, the Greco-Roman churches do not follow the Apostle Paul’s admonition to imitate him as he imitated Christ (1 Corinthians 11:1) nor the Apostle John’s admonition to continue to walk as he and Jesus walked (1 John 2:6, 18-19), since they do not keep all the biblical holy days. Also, those churches normally combine heathen practices in their worship calendars, which the apostles opposed (1 Corinthians 10:20-23; 2 Corinthians 6:14-18; Jude 3-4, 12; 1 John 2:6).

By not keeping God’s Holy Days, but instead non-biblical substitutes, many do not realize that sin needs to be truly out of our lives, that God is only calling some now, that all will have an opportunity for salvation in this age or the age to come, and nearly all who ever lived will be saved in the later harvest.

God’s Holy Days lay out parts of His plan of salvation that most do not understand. It is a marvelous and loving plan.

The United Kingdom and European Union are still having Brexit-related trade issues. The situation regarding the border and free flow of goods between the Republic of Ireland (in the EU) and Northern Ireland (part of the UK) is causing trade and other concerns (see DW: EU-UK trade war looming as Northern Ireland Protocol tensions hit boiling point). Irrespective of how that turns out, the EU is not going to ‘forgive’ the UK for leaving it and Europe will one day control all of the UK, including Northern Ireland.

Speaking of exits from the EU, there was a decision by a Polish court that got some to worry if Poland may exit (see CNBC: Poland’s defiance of EU law raises concern over a possible exit), but protests over the weekend pointed to widespread support for Poland to remain in the EU (see BBC: Mass protests in Poland amid EU exit fears).

At least partially because of its ecumenical agenda, the Vatican has announced that it intends to declare Irenaeus of Lyon a “doctor of the church” (seeNCR: Pope Francis to Declare St. Irenaeus a Doctor of the Church with Title ‘Doctor of Unity’). Irenaeus is claimed as part of the succession list of the Church of England (see the free online book: Hope of Salvation: How the Continuing Church of God Differs from Protestantism). The Vatican, itself, does not seem to mind that Irenaeus was a binitarian who taught the 6000/7000 year plan and the millennium. Those doctrines are not tolerated by the current Church of Rome (and are basically considered by it as ‘doctrines of antichrist’). Nor is the “binitarian” one acceptable to its ecumenical plans (e.g. watch Vademecum: Rome’s Trinitarian Ecumenical Handbook). The trinitarian position of the Vatican and the World Council of Churches excludes those who are not from their ecumenical plans. Hence, we in the CCOG are not a group they are looking for merging theologically with.

On other matters, terror hit in the USA (see ‘BREAKING NEWS: More Than A Dozen Shot, One Dead After Shootout In St. Paul Bar’) and Norway (see ‘Norway officials: Bow-and-arrow attack appears act of terror’) this week. Without repentance, more terror is expected to hit the descendants of Israel (Deuteronomy 32:5,25).

Yes, brethren, the world promotes its ways and holidays. But not to be of it, but live as those set apart by the truth.