We are back in California. We got in very late last night.

We hope and pray you learned and grew during the Feast of Tabernacles this year.

For the Feast of Tabernacles our family went to Novi Sad, Serbia and Alexandria, Virginia.

We stayed an extra day in order to see Washington D.C. and go to the White House. No, we did not see the president or his wife. It was basically a walk-through of the east wing of the White House.

We have received reports from some of our Feast of Tabernacles sites.

Here is a report from the Philippines: 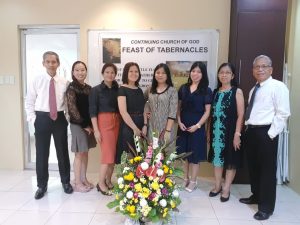 Greetings from Bacolod, Philippines, to our dear brethren throughout the world!

We, the eight of us though few, but joyfully fellowshipping and absorbing the abundant spiritual food God has prepared for us in this feast.

The group from Tabasco, Mexico sent the following from the Feast: 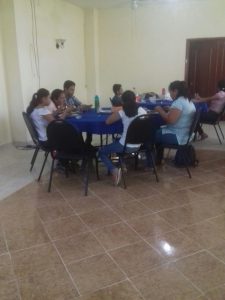 The Ochiengs sent in the following reports:

Wonderful Feast of Tabernacles was opened on 23rd September 2018 evening. This was the most enjoyable feast in Kenya. The happiest week of all the weeks. I was very happy with the feast of tabernacle 2018 because God’s church obeyed the commandment and reached at the feast site at the appointed time. Our brethren from all the congregations that were attended and keep the Feast of Tabernacles in Ndhiwa reached the same day. The opening hours found everybody inside the hall. Day one was a wonderful day and brethren enjoyed chicken, juices and snacks. The faces were smiling and the temperature was good. The sermonette was done by Evangelist Evans Ochieng from Kenya and sermon videos by Dr Bob.
On Wednesday we had free walking in the afternoon where brethren visited different places to see God’s creations. Some went to Ruma national park where we different kinds of animals, like buffalo, Rhinos, Antelope, Giraffes etc. Ndhiwa feast site is surrounded by so wonderful sites.  We have Lake Victoria, the fresh water lake.

Greetings to all the brethren all over the world . It is my pleasure to share with you the report on the Feast Of Tabernacle 2018 In Kenya, Homa-bay County, Ndhiwa  sub-county, Sigama villages.

Everyone knows it is God’s plan and a command for true Christians to Keep the Feast Of tabernacles every year. You may wish to have a glance at the verse bellow:

As you  know and to those who have not known  , this Feast site is located just 300 miters from Ruma National Game park where many had the opportunity to just walk up to the game park to view God’s creation and Thim Lich Ohinga national Reserve where  anyone can learn more about the Luo tribe and how they lived and erected very tall walls with stones to protect them from their enemies in the ancient days plus the site is located 10 kilometers away from Lake Victoria , A fresh water lake with different species  of God’s creation such as Hypos crocodiles and many more.

The congregations that came to this site are, Ndhiwa congregation  which was hereby the Host, Three congregations from Kissi, Nyakach, oyugis, mbani, Oriang, kiseke, Kehancha, Migori, otho , Giribe  and the total number of brethren that attended the Feast of Tabernacles this year in Ndhiwa was 273, many who are at Primary schools, High schools collages and universities both teachers and students could not attend because of preparation for what they call end year exams which is starting this month.

For the brethren who came, we enjoyed different teachings from different pastors and many brethren had enough time to ask and know various teachings as most of the afternoon services were left for bible study.

This time round we had over 31 brethren who had obtained the age of 60 and above some were old as 85 year and Pastor Evans Organized for them a special day where there were left alone to study and have special meals so  that they would then teach  the young people how to lived and only follow Christ in this deceived world. “ Proverbs 1:8-9 My Son hear the instruction of you Father and do not forsake the law of you mother for they will be graceful ornament on your head and chains about your neck.”

“ Proverbs 3:1  My son, do not forget my Law but let your heart keep my commandments for length of days and long life and peace they will add to you”

I am sure that all the brethren all over the world had a very wonderful Feast of Tabernacles and that everyone had the opportunity to continue growing in Faith from the teaching we got during the Feast that is preparing us to be ready for the soon coming Christ and His Kingdom.

Here is another report from another region of Kenya:

REPORT FROM TRANS MARA ON THE FEAST OF TABERNACLE

I greet you in the name of Jesus Christ, we had a blessed Feast of Tabernacles. The brethren were blessed on the teaching in the feast. All the groups of transmara attended chilani local church, I also received a report from njoro and its members that they went on well at mau same to bomet. We are really thankful to the Continuing Church of God and Pastor Ochieng because ever since we joined the church we have experience a great dispensation of the word  more so in chilani. For the last ten years we have been  experiencing unfavorable weather conditions that has affected us economically and that we could not sustain our selves for three days in the feast if it could not have been you .the thing  which I have also like in the brethren of chilani is that  they like the feast. I believe that you may ask how other churches of God around us who are feast keeper do this? The answer is that they cannot even sustain themselves for 3 days because of economic hardship. They just only appear in the evening worship for a while and went home but in some places such as bomet and kericho where the land is a bit productive they are able to assemble the food items and are able to sustain themselves in the feast. We also had brethren who had visited us from other churches, there were brethren from kilindani, we had also women from angata barakoi who migrated from a place called kapsinendet . They invited us to their area. If we could get support we could visit them in the course of the month.we want to thank you for your prayer to brethren who were not feeling well. the elder from  kabolecho called jona who was with us in the feast with his family, although he is going for check  up at eldoret,others are children of pastor William of whom 3 of them had fallen ill, 2 have recovered while one is still sick, – …

I also sent some photos from chilani groups together with the message above.

The Lord bless you

Note: The photos were not attached, so apparently they overlooked attaching them.

Speaking of photos, here is a photograph after Last Great Day services in Alexandria, Virginia: 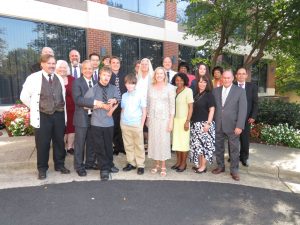 Here is a report from Ethiopia: 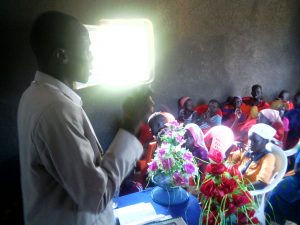 Koang Deng speaking at the Feast in Ethiopia

Greeting in the name of Jesus Christ be with you all. we are so happy for what God planning for sending his beloved son who redeem us from this world. We will be now a first fruits in Jesus kingdom. These are a total number of people who attend the feast. Our numbers are 40.30 from children. And 10 from Elders people. We have 4 people from camp.

While the Feast of Tabernacles for 2018 is past, we are already coming up with plans for 2019.

While the Feast of Tabernacles was going on, the USA made a trade deal involving Canada and Mexico (see NAFTA replacement agreement reached). Despite how some view this, the prophetic reality is that Mexico will ultimately turn to support Europe and turn against the USA.

Over in Canada, there has been another step to encroach on religious liberty (see Canadian government entity indicates it trumps religious beliefs). Expect more such encroachments.

Germany and Israel have been meeting today in an effort to improve relations (see ‘Germany’s Angela Merkel in Israel amid deep divisions’). However, despite the fact that Israel and Germany will have improvements at times, this will not end well for Israel (cf. Daniel 11:31,41).

12 Not that I have already attained, or am already perfected; but I press on, that I may lay hold of that for which Christ Jesus has also laid hold of me. 13 Brethren, I do not count myself to have apprehended; but one thing I do, forgetting those things which are behind and reaching forward to those things which are ahead, 14 I press toward the goal for the prize of the upward call of God in Christ Jesus. (Philippians 3:12-14)

Though the Feast of Tabernacles for 2018 is now over, we all need to continue to press towards the prize of the upward call.