Greetings on this Feast of Trumpets!

One of the things that I have liked about that Holy Day for decades is that it helps picture the return of Jesus and the establishment of the Kingdom of God.

We put together two festival brochures and plan to get that out to the two sites in the USA.

Services for the Feast of Tabernacles is to begin the evening of October 4th and continue until through Last Great Day which is October 12th this year.

The plan is for my wife and I to attend two sites: Takanini, New Zealand and San Diego, California (USA).

Deacon Richard Close is to be in Wichita, Kansas.

Canadian vice president designee Steve Dupuie is to be in San Diego and then Kingston, Ontario (Canada).

This time I will have a lot of work because I am needed to attend the Feast of Tabernacles 2017 in Rift Valley, NDHIWA and Tanzania. I will give Rift Valley two days and Tanzania, one day and the rest I will be in NDHIWA.
Evans

In addition to travel by speakers, CCOG congregants will be traveling to various sites themselves.

A listing of those sites is in the article: Feast of Tabernacles’ Sites for 2017.

This week’s recommended sermon, Fatima and the ‘Miracle of the Sun’, is a bit longer than usual. I wanted to cover aspects of Fatima and wished to show from the Bible why what appeared there in 1917 was not Jesus’ mother Mary. Furthermore, I wanted to point out that signs and lying wonders are not to be believed above the Bible. Next month, on October 13th, many will celebrate the 100th anniversary of the ‘miracle of the sun’ that occurred in Fatima, Portugal. While non-Catholics generally ignore Fatima, please understand that the use of Marian apparitions, signs, and wonders has long been part of the Vatican’s ecumenical and interfaith plans. The Bible teaches that Satan will use signs and lying wonders and that most will believe the lies in the end times (2 Thessalonians 2:9-12). We need not only to prepare ourselves, but warn others about these matters.

Essentially, the apparition that appeared to three little children gave false messages and taught a false gospel. Furthermore, the appearance of the apparition was NOT like the statue that many think represents the ‘Lady of Fatima.’ 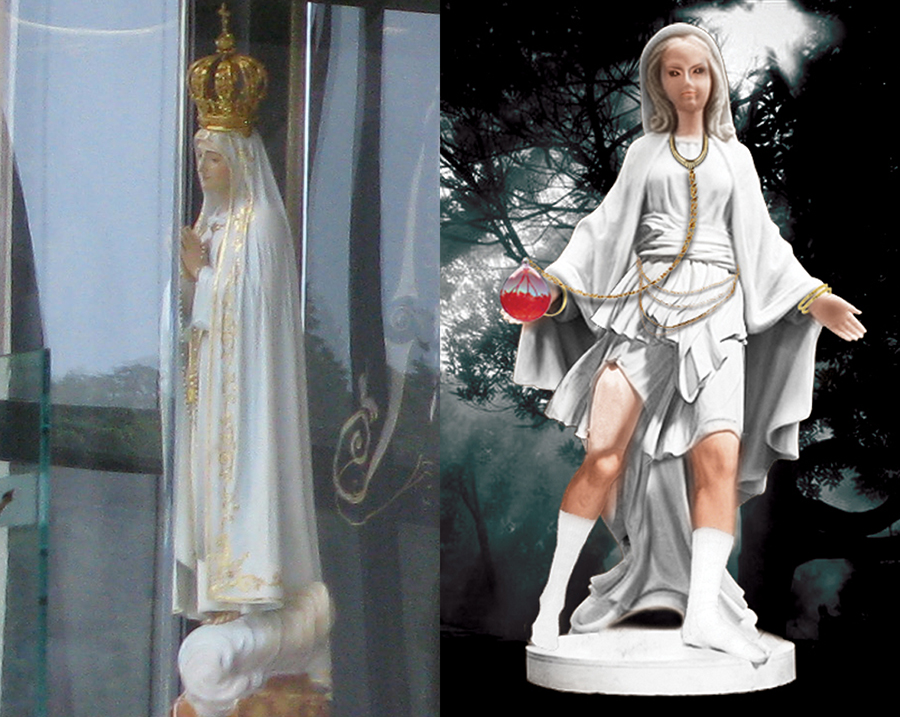 Fatima Chapel Statue and What the Fatima Children Said They Saw

We want people to understand the truth of the gospel as well as salvation through Jesus. The apparition at Fatima taught another, false, way to salvation.

As it turned out, I ended up being on the Nutri-Medical Report on the Republic Broadcasting Network (RBN) Monday, September 17th at 2:00 pm CDT. The host and I discussed speech restrictions, the 6000 years, and the subject of this week’s recommended sermonette (US Dollar being challenged by Gold-Petro-Yuan). The host and I also disagreed on the identity of the Beast and several other matters.

Google reported that our campaign with them reached 2,233,745 computers last month. That is down from the previous month and may be related to certain Google algorithm processing issues.

We also, of course, reach others through our websites as well as cogwriter.com.

We have a Latin American translator who often translates COGwriter.com news items into the Spanish language.

Here is something he sent to me today:

Want to know some things you should pray about?

The Truth Does Not Matter to Many

Bloomberg’s macro commentator Mark Cudmore, who in his overnight Macro View writes that “traders should should spend less time studying economic releases and listen to the clear guidance from officials instead.”

The relevance of data is declining. Policymakers around the world are trying to make crystal clear that they’ll ignore that which doesn’t fit their narrative. Many financial commentators have failed to make the transition and are incorrectly transfixed by each data release.

Or, in short, data no longer matters in a world of central planning. http://www.zerohedge.com/news/2017-09-21/why-economic-data-no-longer-matters

What the above seems to be saying is that the truth of facts is getting more and more ignored. The Bible warns that in the end times all will be deceived except those that have the “love of truth” (2 Thessalonians 2:10): “for this reason God will send them strong delusion, that they should believe the lie, 12 that they all may be condemned who did not believe the truth but had pleasure in unrighteousness” (2 Thessalonians 2:11-12).

We are seeing a disregarding of truth by governmental, religious, and economic leaders, as well as by most people on the Earth. Do not fall in with those that do not value and appreciate the truth.

While not yet over Hurricane Irma, the Caribbean has been hit with Hurricane Maria (see Hurricane Maria devastates Dominica, heading towards islands like Puerto Rico and the Dominican Republic) and Mexico another hurricane (see Hurricane Maria pounds Puerto Rico; Hundreds die from Mexico earthquake). The small island nation of Dominica was devastated and other islands also suffered. Many are without power in Dominica, Puerto Rico, and elsewhere (see also Puerto Rico & Dominica without electrical power: ‘Exactly how many warnings do need before you figure out that something bad is about to happen?’). Those affected are in my prayers.

North Korea and the USA continue to trade barbs of rumors of war (see North Korea wants military equilibrium with the USA, while USA looking at military options against North Korea). At the United Nations on Tuesday, US President Donald Trump blasted North Korea, along with Iran and Venezuela (see ‘Trump Calls for World Action Against North Korea, Iran, Venezuela’). While the USA can defeat those nations militarily, Iran and North Korea want to cause physical harm to the USA and Venezuela took at step (watch US Dollar being challenged by Gold-Petro-Yuan) that ultimately may hurt the USA economically.

In the USA, we again have seen protests turning violent–this time in St. Louis, Missouri. In what seems to be a horrific ‘sign of the times,’ one of the so-called ‘peaceful’ protest organizers essentially defended violence from protesters (see Police arrest more than 80 amid violent St. Louis protests). While justice may or may not have been well served by the verdict in the trial being protested, lashing out violently against others is not the way to go. All should condemn such violence. St . Louis, like the rest of the world, needs the Kingdom of God.

We continue to see more restrictions on freedom of speech. Last Thursday, US President Donald Trump signed some type of proclamation against “hate speech’ (see President Trump and Congress move against ‘hate speech.’ Could this include quoting the Bible?). While there was no specific condemnation in that which would cause the CCOG problems, the fact is that many consider condemnation against certain biblical-identified sins as “hate speech.”

An election in Germany is set for September 24, 2017. Supporters of speech restrictions are expected to win. See the posts ‘The Death Of Free Speech Is Imminent,’ 666, & Germany’s election and  DW: Right-wing populists have already won the election. While looking for a photograph to go along with that latter post, I came across the following: 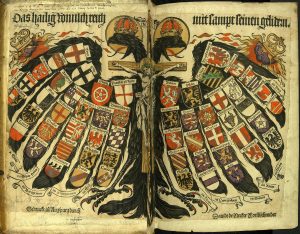 What caught my eye was that the above painting had several shields with a cross as well as a crucifix in the middle. It has long been my view that a mark of the Antichrist will involve a cross of some sort. We will see.

Because of lying wonders and false teachings, billions have been deceived.

In the future, it will even get worse:

7 For the mystery of lawlessness is already at work; only He who now restrains will do so until He is taken out of the way. 8 And then the lawless one will be revealed, whom the Lord will consume with the breath of His mouth and destroy with the brightness of His coming. 9 The coming of the lawless one is according to the working of Satan, with all power, signs, and lying wonders, 10 and with all unrighteous deception among those who perish, because they did not receive the love of the truth, that they might be saved. 11 And for this reason God will send them strong delusion, that they should believe the lie, 12 that they all may be condemned who did not believe the truth but had pleasure in unrighteousness. (2 Thessalonians 2:7-12)

Brethren, have the love of the truth. Walk by faith (2 Corinthians 5:7) in the word of God (cg. Romans 10:17), and do not let signs and lying wonders damage your faith.

P.S. Next week’s Letter to the Brethren is expected to be sent out from California on Wednesday September 27th. In order to get to New Zealand prior to the Day of Atonement, my family is scheduled to fly out Wednesday night to arrive in New Zealand Friday morning. Since we do not expect to have internet access on that flight, it seems best to send the letter out a day early.