We hope and pray you are doing well and growing in grace and knowledge.

The Fall Holy Days are coming up soon.

The first will be the Feast of Trumpets which begins at sunset on October 2nd this year.

The next will the Day of Atonement, which begins at sunset on October 11th this year.

The Feast of Tabernacles starts the following week, and begins at sunset on October 16th this year.

Here is information on the dates:

Holy Day Calendar This is a listing of the biblical holy days through 2024, with their Roman calendar dates. They are really hard to observe if you do not know when they occur 🙂 In the Spanish/Español/Castellano language: Calendario de los Días Santos. In Mandarin Chinese: 何日是神的圣日？ 这里是一份神的圣日日历从2013年至2024年。.

For information on the general locations of our congregations, check out the link: Congregations of the Continuing Church of God.

Herb Haddon of New Brunswick, Canada sent in the following:

Dr. Thiel;
Attached are a couple of pictures.  …  The first is the promo sign for St. Andrews, NB.  The second is the Post Office in Harvey Station.  It brings to mind that God is not using the mighty of the world to get His work done!
Herb

Here are the photos:

St. Andrews is the site of the Feast of Tabernacles in Canada this year. Harvey Station is where church services are held in New Brunswick (they rent a part of the post office).

Those doing God’s work will accomplish this by obeying Him and being led by His Spirit.

We finally have a version of our songbook, The Bible Hymnal, available in the language of Chichewa.  The title in that language is Nyimbo za Baibulo. 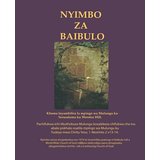 We ordered a few and hope that they will get to Malawi just prior to the Feast of Tabernacles this year.  The interior is not as we prefer, but we felt that by getting some there now, the interior will be able to be better worked on there so that we will be able to produce a better version in the future.

Chichewa is the third language for our songbook and we hope to have other languages in the future ( I received a report from someone on the Kenya/Tanzania border that the people were grateful there for the Kiswahili hymnals that just arrived there–so we are getting positive feedback on that songbook already).

Chichewa is spoken by many of our brethren in Malawi and Mozambique.

He sent in the following report to Pastor Evans Ochiend as well as photos:

I am safely back from Mozambique,am sending pictures of our brethren from Mozambique Church. I took three ladies from Malawi to teach also Mozambique women how they can handle things in CCOG and  our families in order to have better and dynamic Church. I shared magazines and booklets written by our founder Dr Bob. I am sending one brother to go to Mozambique so that he can translate our Magazines so that they can learn more.  They are hungry with the words of God. I talked more concerned about Sabbath, clean and unclean meats also baptism. They are glad to have all this teachings. They are also just waiting days to reach so that they can come to Malawi for the Feast of Tabernacle of this year. Thank you very much pastor Evans and Dr Bob for the support. We love and pray for you.

The last picture is for pastor Matiya and his wife. His wife hold booklet and pastor hold magazine. Those ladies in uniform are ladies from Malawi who led by God to accompany me on this trip.

We are reaching people in many lands.

Koang Deng sent me an updated reported on Tuesday about the membership in Ethiopia and South Sudan:

This numbers of those who recieved( ccog) message.
Best regards,
Koang Deng.

Both Ethiopia and South Sudan are facing troubles and trials in many ways.

Google reported that our campaign with them reached 3,511,857 computers last month. When this is combined with what cogwriter.com and the CCOG websites have reached, this means nearly 4,000,000 computers received information about the truth in August of 2016. This is up a little from last month.

Hundreds of thousands protested trade deals in Europe, mainly Germany, over the weekend (see TTIP & CETA protests show European anti-Americanism). While trade deals were the claimed reasons, it is reported that anti-Americanism is behind a lot of this. North Americans (those in the USA and Canada) do not realize how deep anti-American sentiment is running in Europe–and it will worsen.

Last Thursday, the President of the European Parliament publicly warned against USA Republican presidential candidate Donald Trump, while endorsing his Democratic party rival, Hillary Clinton (see President of EU’s parliament backs Hillary Clinton and warns against Donald Trump). The attempts to so strongly denounce a USA presidential candidate (this is not the first one, and even Karl Theodor zu Guttenberg did the same last year) shows that the Europeans are deeply offended that Donald Trump is even an option. If Donald Trump wins, the Europeans will believe that they must take more steps to separate from the USA. They will also take steps in Hillary Clinton wins, but the process will be different (likely much more subtle).

There was a meeting in Europe, without the United Kingdom, this past Friday, in which the European leaders basically admitted that the European Union has flaws, but that European unity is essential for European prosperity and military security (see Bratislava: European Union best way for security and growth). This post-Brexit meeting shows that Europe does intend to move further away from the USA and the UK.

Tuesday an interfaith meeting involving over 450 religious leaders took place in Assisi, Italy. They claim to be promoting peace (see Interfaith day of prayer– ‘there is no God of war’?), but they are setting things up for the rise of final Beast power (Revelation 13:1-10). Consider that the Bible teaches:

8 The way of peace they have not known,
And there is no justice in their ways;
They have made themselves crooked paths;
Whoever takes that way shall not know peace. (Isaiah 59:8)

9 But these two things shall come to you In a moment, in one day: The loss of children, and widowhood. They shall come upon you in their fullness Because of the multitude of your sorceries, For the great abundance of your enchantments. (Isaiah 47:9)

Revelation 17:16-17 shows that this will happen as the European Beast power will one day turn against the Church of Rome (Revelation 17:5-9,18). Instead of believing that various Catholic-related ‘miracles’ come from God, we need to be diligent to “we walk by faith, not by sight” (2 Corinthians 5:7). Satan will have persuasive ‘miracles’ appear in the future those only those with proper ‘love of the truth’ will be able to resist (1 Thessalonians 2:9-12).

In the USA, there have been more violent protests related to police shootings (see Black officer kills black man: protests in Charlotte turn violent and State of Emergency declared in Charlotte). The Bible shows that humans do not now know ‘the way of peace’ (Isaiah 59:8), but that the time will come when there is no longer ‘violence in the land’ (Isaiah 60:18). Pray for God’s kingdom to come (Matthew 6:10).

Notice something from the Jubilee Bible 2000 translation of what the Apostle Paul originally wrote:

17 For Christ sent me not to baptize, but to preach the gospel, not with wisdom of words, lest the cross {Gr. stauros – stake} of Christ should be made void. 18 For the word of the cross {Gr. stauros – stake} is foolishness to those that perish, but unto us who are saved, it is the power of God. 19 For it is written, I will destroy the wisdom of the wise and will bring to nothing the understanding of the prudent. 20 Where is the wise? where is the scribe? where is the philosopher of this world? Has not God made foolish the wisdom of this world? 21 For in the wisdom of God, since the world by wisdom knew not God, it pleased God by the foolishness of preaching to save those that believe. 22 For the Jews require a sign, and the Greeks seek after wisdom, 23 but we preach Christ crucified, {Gr. Stauroo – hung on a stake}, unto the Jews a stumblingblock and unto the Gentiles foolishness; 24 but unto those who are called, both Jews and Greeks, Christ is the power of God, and the wisdom of God. 25 For that which is foolish of God is wiser than men, and that which is weak of God is stronger than men. 26 For look upon your vocation, brothers, that ye are not many wise men after the flesh, not many mighty, not many noble, 27 but rather God has chosen that which is the foolishness of the world to confound the wise, and God has chosen that which is the weakness of the world to put to shame the things which are mighty; 28 and that which is vile of the world and that which is despised God has chosen, and things which are not, to bring to nought the things that are, 29 that no flesh should glory in his presence. 30 But of him ye are reborn in Christ Jesus, who of God is made unto us wisdom and righteousness and sanctification and redemption, 31 that, according as it is written, He that glories, let him glory in the Lord. (1 Corinthians 1:17-31)

(I chose this translation as it often properly inserted that the term ‘cross’ was not really in the Bible.)

But my point for citing these verses in 1 Corinthians is to point out as this world moves further away from the Bible, that the truths of the Bible are foolishness to them, but not to us. But this does not make us wiser than them, but hopefully more humble and willing to follow what God teaches us. When you hear of the false arguments in favor of sexual immorality and other views contrary to the Bible, remember to believe God, rather than fallible humans (cf. Romans 3:4).