Received an unexpected email last week from someone who used to help me get radio interviews on secular stations:

Hi Bob, it’s your old radio promoter …, and I remembered your name after seeing some Thiel headlines recently. I’m not doing media anymore, but it’s neat to see how your were right in your predictions.

Here is what I sent in response:

Nice to hear from you.
Yes, in all the books you tried to help promote, I was right on all the predictions in them (e.g. events aligned with 33 in my 2012 book by the end of 2012, to cite one example).
One radio host you got me an interview with years ago, who had been a Trump delegate in 2016, told me I was right on most of the ones in the Trump book except about Trump increasing the debt. Obviously, that happened.
Anyway, should you have the itch to do this type of promotion again, let me know.
While less and less are interested in truth, there still is a need to broadcast it.

Much of what I and the CCOG have taught is coming to pass. One day, more will realize that (cf. Ezekiel 33:33).

But it was nice to hear from a non-COG person that he recognizes that what was taught in those books related to prophecy is coming to pass.

Fourth Horseman, COVID, and the Rise of the Beast of Revelation   12,062 page views

Both of these programs were her idea and we are reaching those that we otherwise would not. I had planned to cover the above in a sermon last Sabbath, but decided to do that particular sermon at a later time.

Received reports that Bibles in the language of Chichewa were delivered to members in Malawi and Mozambique. Deacon Radson Mulozowa sent the following photo of the Bibles: 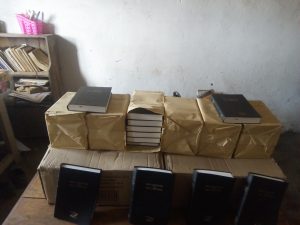 It is difficult to “know the certainty of the words of truth” (Proverbs 22:21) without Bibles in one’s native language. We are glad the Chichewa-language Bibles arrived and have mainly been distributed.

In general, the CCOG does not get involved in naming children.

However, over the years it has became apparent that in various African lands, some parents like to name their children after religious leaders from the United States.

Someone with such a first AND last name contacted me some time ago, and it was a bit sad as she was not then affiliated with the leader whose last name (surname) she had.

Speaking of children, while some may like to celebrate birthdays, please understand that we in the CCOG teach against birthday celebrations. Local CCOG leaders should teach that to their newer members as well as any who do not fully understand the CCOG’s position on that. For more information, check out the article Did Early Christians Celebrate Birthdays?

History and the Final Phase of the Work

Several days ago, two websites that are focused against Church of God (COG) groups highlighted the writings of someone who pointed out flaws in aspects of COG history as found in a book from the late A.N. Dugger, which had also been taught by other COG groups. In response, I posted what we in the CCOG teach about some of that (see Stephen Mumford was not COG and the CCOG does not include him as one of our spiritual predecessors). We in the CCOG, while not having perfect understanding of all matters of COG history, do not have many of the errors that other claimed COG groups have.

Why is that important?

Well, in order to lead the Final Phase of the Work, a group needs to have the love of the truth and be best able “to contend earnestly for the faith once for all delivered to the saints” (Jude 3). At this instant, other COG groups are not doing that as they should as they have major problems with their teachings on church history. Various ones teach myths and other errors. These are major credibility problems that other COGs have been unwilling or unable due to lack of knowledge (or unwillingness to go against accepted, but erroneous traditions) to fix.

In order to provide a proper witness and “instruct many” in the end times (cf. Daniel 11:33), we need to strive to be as accurate on matters like church history as that is a point that the Greco-Romans think they dominate on, yet a point we in the CCOG can better claim (see also our free online book: Continuing History of the Church of God).

That being said, we plan to continue to update our teachings on church history as we always wish to instruct “more accurately” (cf. Acts 18:26).

While much of the world is still in at least partial lockdown because of governmental regulations blamed on COVID, some in Germany are pushing for the end of the “occupation” of the USA since WWII (see ‘The Reichsbürger movement in Germany’). One day, Germany will turn against the USA militarily and defeat it (cf. Isaiah 10:5-11).  Anti-American sentiments are alive and increasing in parts of Germany.

Speaking of Germany, its former Economics and Defense Minister Karl-Theodor zu Guttenberg acquired a Ph.D. (see Once again, it is Dr. Guttenberg). Herr Guttenberg resigned in position several years ago after a scandal pointed to him plagiarizing parts of an earlier doctoral dissertation. He wrote a different dissertation and was granted a Ph.D. from the University of Southampton. Dr. Guttenberg is one to watch related to the upcoming European Beast power because of his heritage and areas of expertise.

Over in Vatican City, Pope Francis re-iterated the Roman Catholic position that God made the world to show His glory, but that is not the reason God did that (see Pope Francis: The world was made to communicate the glory of God’ COGwriter: God is not an egotist as He made the world so eternity would be better). God made the world so eternity would be better. More on that can be found in our free online book: The MYSTERY of GOD’s PLAN: Why Did God Create Anything? Why Did God Make You?

Over in the USA, we continue to see protests, counter-protests, and violence (see Trump speaks as protesters urge his removal in Washington, D.C. and ‘And the city is full of violence’). Jesus said, “Every kingdom divided against itself is brought to desolation, and every city or house divided against itself will not stand” (Matthew 12:25).

9 And this I pray, that your love may abound still more and more in knowledge and all discernment, 10 that you may approve the things that are excellent, that you may be sincere and without offense till the day of Christ, 11 being filled with the fruits of righteousness which are by Jesus Christ, to the glory and praise of God. (Philippians 1:9-11)

Brethren, please pray for those of us who give sermons and write articles that we may better teach you so that you will grow in love, knowledge, and discernment and be filled with the fruits of righteousness which are by Jesus Christ.