What did the old Pasadena Campus of Ambassador College and the former Headquarters of the old Worldwide Church of God look like? What does it look like now?

There are still several original buildings of old Ambassador College and former headquarters of the old Worldwide Church of God remaining, but many have been destroyed.

For example, here is a photograph of an area that has been completely demolished: 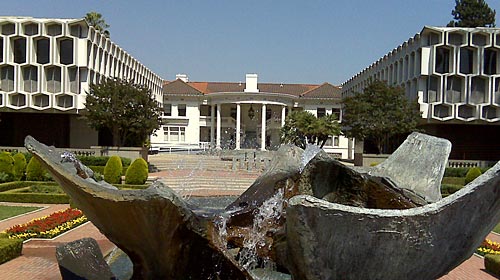 The building to the right is the old Fine Arts building for Ambassador College. The one to the left was the Science building. The one in the back was the Loma D. Armstrong Academic Center. All of these buildings, as well as the fountains, etc. in that area were demolished in 2013. My wife Joyce and I (Bob Thiel) were married in the Fine Arts building in 1981.

On July 20, 2016, Joyce and I visited the area.  All the rest of the photos here she either took or directed.  Here is what we saw that is replacing the three buildings shown above:

So, basically, there is nothing there except a construction project–probably to build condominiums.

But not everything has been destroyed.

Here is a current photograph of Ambassador Auditorium:

It is still called Ambassador Auditorium. But the fountain is a little different. So is the inside:

This photo was taken from the outside of Ambassador Auditorium looking inside as the building itself was locked. We did not see words any more like “Dedicated to the Great God” or “the word of God is the foundation of knowledge” which used to be there. These statements seem to have been removed. The words that remain say “Ambassador Auditorium.”

This is a door handle to Ambassador Auditorium. The door handles appear to be aged a bit, but original. They show a child with a lamb on his lap, sitting in front of a lion. This was a symbol often used by the old Worldwide Church of God to help picture the millennium.

This building was (and still may be) called Mayfair:

Mayfair was the female dormitory of the old Ambassador College.

There are still waterfalls and streams on the grounds, though less than there used to be:

Here are Joyce and I sitting on a bench (Joyce used a tripod and timer to take this photo):

The grounds still are nice to walk on. Here is another picture of Joyce on the grounds:

But the grounds are not as nice as they once were.  Furthermore, there are restricted areas as many parts are no longer open to the public as the following sign helps demonstrate:

So, you are not allowed to walk up to all the areas that we once were allowed to. This was a disappointing sign to come across.

The building on top is now called Ambassador Mansion.  Here is the sign below that says so:

The old Ambassador College Student Center is still there as the two photos below show:

It appears to be a Student Center for the Maranatha High School. Here is a sign for that:

There are no signs anymore calling the grounds Ambassador College or the headquarters of the old Worldwide Church of God.

Here is a directory map that is now on the grounds:

This is supposed to be map of the current buildings, although it lists a Pepperdine University presence, its office seems to no longer be on the property.

The old track is still a track, but also an American Football field with football yard markings and goal posts at the ends. Tackle football had been prohibited to be played at Ambassador College by the late Herbert W. Armstrong (see Is American Football Evil?).

Here is additional construction going on, that is not part of the Maranatha portion of the old Ambassador College campus:

This looks like another condominium type of building being built. The ones we read about started “in the 2 millions.’ This area has long been an area where ‘millionaires’ had houses.  Though those houses were a lot larger than many of the condominiums now being sold.

There are fish in some of the small ponds on the old Ambassador College campus:

There are also some turtles:

Here is a waterfall/pond photo:

This fountain does not look like any we remember from the old Ambassador College campus, but is in ‘Ambassador Gardens’:

This is Ambassador Auditorium from one part of the Ambassador Gardens:

We were disappointed to see many fine buildings and fountains gone. We also did not like the fact that you can no longer walk all of the old campus.

But, it was still nice to see. Hopefully, those of you seeing these photos will benefit from either your memories (if you saw the old campus) or some of the original buildings for the first time.

Of course, physical things do not last. Even the temple in Jerusalem was destroyed (though some of the bricks from the second temple apparently were saved and still exist, see Church of God on Jerusalem’s Western Hill).

Like the Jews who saw the original temple that were disappointed when they saw the second temple (see Haggai 2; see also The Temple and the Work), some believe that the Church of God needs impressive buildings in the 21st century.

But God does not see things the way humans do (Isaiah 55:9). And notice what God told people who wanted a fancier temple:

“The glory of this latter temple shall be greater than the former…” (Haggai 2:9).

And that is the case today, which is part of why God allowed the old Ambassador College campus to no longer be the headquarters for His physical church on the earth.

To see what that looks like, check out the article: Continuing Church of God relocates to Grover Beach, California