Home › Questions and Answers › Are any types of birth control scripturally allowed?

Are any types of birth control scripturally allowed? 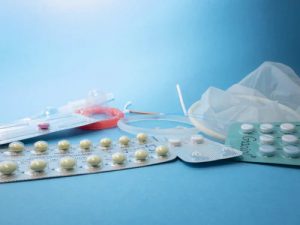 Some have wondered if it is proper for married Christian couples to practice any type of birth control.

If so, what are the options?

Let’s start off by stating that the Bible does not teach against birth control methods that do not involve killing unborn babies (cf. Exodus 1:15-17,20-21; see also Abortion, the Bible, and a Woman’s Right to Choose) or stopping inheritance (like Onan did cf. Genesis 38:8-10).

Before going further, let’s begin by looking at some historical information on birth control from Time magazine:

1550 B.C.
An Egyptian manuscript called the Ebers Papyrus directs women on how to mix dates, acacia and honey into a paste, smear it over wool and use it as a pessary to prevent conception.

1700s
Casanova’s memoirs detail his experiments in birth control, from sheep-bladder condoms to the use of half a lemon as a makeshift cervical cap

1839
Charles Goodyear invents the technology to vulcanize rubber and puts it to use manufacturing rubber condoms, intrauterine devices, douching syringes and “womb veils” …

Not that every historical effort was all that effective. Some methods are still used today, such as coitus interruptus — or “pulling out” — which was referenced in the Old Testament, but have never been a reliable form of pregnancy prevention. And other methods seem, by today’s standards, straight-up bizarre. … In 10th-century Persia, women were told to jump backwards seven or nine times after intercourse to dislodge any sperm, as those were believed to be magical numbers. …

Yet it wasn’t all a shot in the dark. Many researchers today believe that several archaic methods of birth control actually had the dual perks of being somewhat effective and not lethal. This is perhaps not so surprising considering that certain methods were passed along from one woman to another. For instance, the ancient Egyptians weren’t completely off the mark with their pessaries: some documents reveal that women would also use pessaries made with acacia gum, which was later found in 20th-century studies to have spermicidal effects. Several other plants used in the ancient world were later found to have contraceptive qualities as well. (The strong, strange history of birth control. Time magazine, February 2, 2015 http://content.time.com/time/magazine/article/0,9171,1983970,00.html accessed 07/08/21) 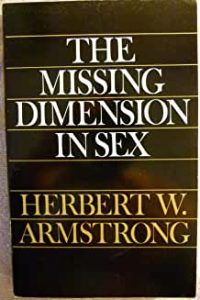 Some experimenters insist spermatozoa retain power for fertilization only 48 hours, and that ova must be fertilized within 24 hours, in the Fallopian tube. Thus, if this were true, there is only a period of a few hours in any month when human conception is possible. This “discovery” led to the “rhythm cycle” theory. But this so-called method … has, in fact, produced quite a bumper crop of babies! (Armstrong HW. Missing Dimension in Sex. Everest House, 1981, pp. 137,140).

There is a joke about that type of birth control that goes like this, “What do you call couples who practice the rhythm method?” “Parents.”

As far as contraceptives go, here are some other comments from Herbert Armstrong:

Is the use of contraceptives contrary to God’s biblical teachings? …

The Roman Catholic Church has always responded, “YES!” {though it allows the “rhythm” method}

But if the BIBLE — the HOLY WORD OF GOD — the Maker’s INSTRUCTION BOOK to mankind — be your true AUTHORITY, it says no such thing!

Sometimes the case of Onan is cited, … But that incident upholds no such teaching … (Gen. 38:9-10, RSV) ... God destroyed Onan. WHY? … not for intelligent spacing of the arrival of children in a happy family. Onan’s purpose in preventing conception was … because he knew that the son born would not belong to him — he did it “lest he should give offspring to his brother.”

Onan’s SIN … was his refusal to OBEY THE LAW which required him to beget a son to bear his brother’s name. His disobedience of THAT LAW was his sin. No such law pertains to New Testament Christians. …

With animals conception takes place as a result of instinct. It is automatic. Reproduction is the sole purpose of sex in animals.

NOT SO with humans. Sex serves the wonderful purpose of LOVE-giving in marriage. Humans are endowed with MINDS. Humans were placed on earth for the express PURPOSE of developing godlike CHARACTER — learning to make right decisions, with prayerful guidance from God and His Word, and to exercise the self-direction to rightly act on those decisions. …

Any teaching … which instills in wives the dread and fear of pregnancy — is a religious heresy, and/or a violation of the higher Laws of Almighty GOD!

No wife should ever need to suffer the fear of pregnancy. It is natural for every wife to want to become a mother. To prevent having children and producing a FAMILY would be a direct violation of God’s command, “Be fruitful, and multiply, and replenish the earth.” But to PLAN a family in an intelligent manner, as to the time of the first arrival, and the time-spacing of other children — that is a different matter. Nothing in the Bible forbids this. MUCH in the Bible, in principle, supports it! (Armstrong HW. Missing Dimension in Sex. Everest House, 1981, pp. 230-232).

We in the Continuing Church of God believe that the Bible does allow for birth control.

Consider something that the Apostle Paul wrote:

8 But if anyone does not provide for his own, and especially for those of his household, he has denied the faith and is worse than an unbeliever. (1 Timothy 5:8).

The principle about providing for one’s family implies that one will not have more children than one can provide for. However, that does not meant that abortion is appropriate (one of the many Differences Between the Continuing Church of God and the Roman Catholic Church is that none of our true leaders ever allowed abortion, yet Catholic “Popes” sometimes have).

It is even possible that Jesus was, to a degree, encouraging the idea of birth control in the latter days as He warned:

19 But woe to those who are pregnant and to those who are nursing babies in those days! 20 And pray that your flight may not be in winter or on the Sabbath. 21 For then there will be great tribulation … (Matthew 24:19-21).

Since married people are to have sex (1 Corinthians 7:3-5), it is possible that Jesus is telling His followers that they may not wish to become pregnant just before the great tribulation. And if that is so, then birth control of some type may be advisable for married people where the wife is fertile when it is getting closer to the time to flee. This also would be similar to Paul’s comments about remaining single during a persecution he referred to as “this present distress” (1 Corinthians 7:26-27).

But even if wise birth control is not part of what Jesus is saying (though I think it was), proper birth control does not kill any new life.

While there are many differences between the real Church of God and the Orthodox Church, here is one area that the two seem to agree on as the Orthodox do allow for birth control:

a … view has taken hold among Orthodox writers and thinkers on this topic, which permits the use of certain contraceptive practices within marriage for the purpose of spacing children, enhancing the expression of marital love, and protecting health. (Harakis S. The Stand of the Orthodox Church on Controversial Issues. https://www.goarch.org/-/the-stand-of-the-orthodox-church-on-controversial-issues accessed 07/08/21)

The vast majority of human ova and spermatozoa will never unite to begin a life. Thus, it is certainly not wrong to prevent them from uniting, which is what non-abortive birth control methods seek to do.

Yet, aborting a fertilized ovum is killing a new life.

Therefore, because it can remove a fertilized egg, IUDs (intra-uterine devices) are considered to be abortion-inducing and are not considered as acceptable birth control by those in the the Churches of God.

Women who use an IUD will expel about one fertilized ovum annually (assuming that they engage in intercourse once per week) (Source: ABORTION: CURRENT BELIEFS BY VARIOUS RELIGIOUS AND SECULAR GROUPS. https://www.religioustolerance.org/abo_hist1.htm accessed 07/08/21).

Certain “birth control” pills do something similar. Including what has been called ‘Plan B’ or the ‘morning after pill’:

The “morning after” pill, designed to induce abortion immediately after sex, will now be available without a prescription to any female 15 and over.  This, my friends, is bigger than Roe v. Wade. (http://www.patheos.com/blogs/geneveith/2013/05/the-morning-after-abortion-pill-over-the-counter/)

Since “morning after” pills help insure that an ovum, fertilized or otherwise, will not survive, those should be considered as an abortifacient. Hence, are not proper for Christian couples.

“Contraceptive” means a method of birth control prevents fertilization of the egg by the sperm by placing a physical barrier between them. However, all birth control pills and the other hormone-based methods of birth control on the market today function as abortifacients part of the time.  (Abortifacient Brief: The Birth Control Pill. April 14, 2021. https://www.hli.org/resources/abortifacient-brief-birth-control-pill/

Birth control pills also affect a woman’s health. It is possible that there may be some pills that are not abortive, and one would need to research that to see if that is true. Yet, be careful as many who are promoting birth control pill do not consider that the prevention of a fertilized ovum to remain in a woman’s body is abortive–yet it is.

Abortive pills and intrauterine devices are not appropriate for true Christians. One other inappropriate method of birth control would be sodomy, which is unhealthy as well as biblically prohibited (Deuteronomy 23:17, KJV; 1 Kings 14:24; KJV; see also Romans 1:26-27; Jude 7).

Barrier methods of birth control are generally acceptable for Christians. This would include things such as condoms, diaphragms, cervical caps, birth control sponges, etc.

Some have claimed that herbs, such as wild yam root, reduce fertility in women. However, a July 8, 2021 MEDLINE search for studies online showing its overall effectiveness turned none up. There is not enough scientific evidence to support wild yam working as an effective contraceptive. One chiropractor claimed wild yam thickened the outer wall (the thin vitelline membrane) of the ovum making penetration by sperm less likely–whether it does that or not is uncertain. While wild yam root might reduce the chances of pregnancy, understand that since women have eaten them throughout history and became pregnant, they probably are not a reliable method for birth control. That being said, natural wild yam does not seem to be abortive and eating them is certainly not biblically prohibited.

Timing methods that do not result in violating scriptural restrictions against intercourse during a woman’s menstrual period are also acceptable (Leviticus 20:18; Ezekiel 22:10), though not considered to be highly reliable.

Some other methods may or may not be appropriate and should be looked into to determine whether or not they are abortive or cause other harm.

Appropriate forms of birth control are fine for Christians, as they are consistent with scripture.

But abortive forms of birth control are not.