We have been working on new materials as well as handling year end financial matters for CCOG.

We have been impacted a bit by COVID-19 here, but not the way most would guess.

One of my company’s employees, who had COVID in early 2021 before she began to work here last May, again got COVID-19 in 2022. Because of that, the man that does nearly all of the formatting of CCOG literature has been partially sidelined to help make up for her being out for nearly two weeks now.

Anyway, we hope she will be available to come back next week, and we can be able to get more CCOG literature ready for printing.

We received a report on the most recent CCOG youth camp: 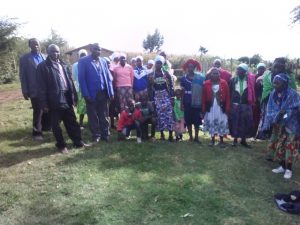 I am glad to take this opportunity to great you in the name of our Jesus Christ our savior who is soon coming to reign this earth.

It was 30th December when we had youth camp at Molo, it was successful and very fruitful, senior youth And Junior youth attend and we hope by God wishes we will promote youth by all means to strengthen their talents for they will be leaders of tomorrow in God vineyard.

I thank my church overseer In Kenya Evans Ochieng for the good work he has done in Kenya and other countries in Africa, may God bless him

Finally I will not forget to inform you that we visited maasai land under the leadership of pastor Evans Ochieng myself and pastor Sawek we  promised them the bibles of their language I hope brother Evans will arrange the next  visit.

Camps were held in several locations in Kenya, and this was the last one for this season.

Deacon Ondigo Ochieng sent the following report about radio in the Kenya and Tanzania region:

Dear Evangelist Thiel:
Greetings in the Name of Our Lord and Savior.
I want to take this opportunity to thank you and the brethren who have been laboring to support this amazing program!
It is a door that God has opened for us to reach out to God’s people with an aim to witness and fulfill Matthew 28:19-20 and Matthew 24:14 so that the people predestined to be called in this age may be called and chosen shortly before Christ comes.
Here is the radio report for the month of December and part of January:
DECEMBER 17, 2021:
DISCOURSE:SEVEN SEALS OF REVELATION
Deacon Grantone and I got a very good opportunity to discuss the seven seals of Revelation.We received 17 phone calls when we were in the station and I later received 24 phone calls after the program.A total of 41 phone calls.Most of the callers were Seventh Day Adventist members (SDA).
Many listeners (who are SDA),confessed that they have been wrongly taught about the white horse.Some asked different questions concerning the four horsemen of Revelation and the seven seals.
DECEMBER 24TH,2021
DISCOURSE:PLAIN TRUTH ABOUT CHRISTMAS
I took 40 minutes on the Friday of 24th to explain the Truth about Christmas. I received 65 phone calls and 16 sms some of which were negative.Most of the negative messages came from Church pastors who claimed that Jesus’ birthday is recorded in the Bible and even if He did not celebrate it, we should celebrate it to show “love” and “concern” for others.
DECEMBER 31ST,2021
DISCOURSE:DEMONIC HOLIDAYS-CHRISTMAS AND NEW YEAR
This again attracted 42 phone calls especially after leaving the station.There was a pastor of the nominal church who confessed that he will never celebrate Christmas and New Year.He visited me personally on January 3rd to discuss more with me about the discourse I gave over the radio.I gave him the booklets on God’s Holy Days and the Continuing History of the Church. He said that he will discuss more with his congregation about the Plain Truth About Christmas.
JANUARY 7TH,2022
DISCOURSE:WHAT DID GOD PROMISE HIS SAINTS? WHEN WILL THEY INHERIT THE PROMISE?
Deacon Grantone gave this sermon and we answered several questions that were asked.We received 22 calls while on the radio station but I again received another 31 after leaving the station.Most of the people wanted to know more about us.It was so very encouraging and I also made a step to visit some who were eager to learn more and gave them the booklets about God’s Holy Days and The Continuing History of the Church.
May the Almighty God bless you abundantly for the good Work you are doing in God’s Vineyard.
Best regards,
Bro. Ondigo

Radio is a ‘door’ (cf. Revelation 3:7-8) we are using to reach the world with the gospel message and the teachings in the Bible.

An Iranian general made a strong threat against the USA (see Top Iranian general says, ‘When we strike at America it will be with great force’). While the USA has the military might to annihilate Iran, that does not mean that Iran cannot do great damage to the USA. Iran seemingly has the capability to launch ‘dirty bombs’ (conventional explosives with radioactive fallout), electromagnetic pulse bombs (which could take out a lot of the electrical grid), release bio-engineered weapons (and cause a deadly pandemic), as well as to support various terroristic activities. So, yes, the USA does face potential risks from Iran.

As far as bio-weapons go, the Russians reported that a USA-funded military bioweapons’ facility in Kazakhstan could have had a lab leak (see Kazakhstan Claims Coup Defeated and Denies US-Funded ‘Military Biological Lab’ Seized By Rioters After Russia Claims Potential Pathogen Leak). The USA has provided funding to bio-weapons’ labs in China as well. Bioweapons are apt to be part of the pestilences that Jesus prophesied during the beginning of sorrows (Matthew 24:4-8).

More and more are questioning the information and recommendations of various governments related to COVID policies (see ZH: “Doomed To Fail” – Top Immunologist Blasts Global COVID Response Driven By “False Propaganda”). Eventually, I believe more will point the finger at the USA for providing false and misleading information (see WHO and some in European media finally reporting some truth about COVID vaccine issues).

In the USA itself, inflation was officially reported to be up about 7% in 2021 (see AP: US consumer prices soared 7% in past year, most since 1982), whereas the true inflation rate is likely much higher.

Although relatively very few Americans will properly repent and turn to the God of the Bible, about 77% in a recent survey consider that the USA is in decline (see It can happen here and 77% say USA is in decline). From promoting immorality, increasing debt, and censoring biblical and other truths, the USA is in decline and will one day fall (cf. Daniel 11:39)–and this could be by 2028 (see Might the U.S.A. Be Gone by 2028?).

34 … “My food is to do the will of Him who sent Me, and to finish His work. 35 Do you not say, ‘There are still four months and then comes the harvest’? Behold, I say to you, lift up your eyes and look at the fields, for they are already white for harvest! 36 And he who reaps receives wages, and gathers fruit for eternal life, that both he who sows and he who reaps may rejoice together …” (John 4:34-36)

Brethren, we need to focus on the work of God. Keep the kingdom a priority and we can, thus, gather the “fruit for eternal life.”