In order to attempt to get radio interviews in order to reach all we can, I have been working on a new book: Biden-Harris Destruction & Prophecies. 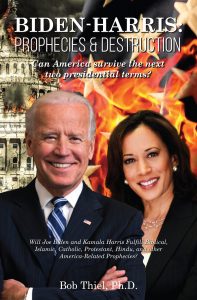 Because of various reasons, including potentially legal ones, this will NOT be an official CCOG book (while we do not consider the book to be “political,” items of morality such as abortion and LGBT matters, are considered to be by secular authorities–so some official distance seems to be wisest).

Well, my first radio interview (which was fairly short was recorded earlier today) is tentatively set up to be broadcast for approximately 10:00 am (Central Time) Sunday, January 17, 2021, WRJB, 99.5 FM, Camden, Tennessee. To listen out of the area, here is a link to the live radio feed: https://streamdb4web.securenetsystems.net/v5/WFWLAM (note: it takes a half-minute or so to come through once you go to the link).

As many of your are aware, I am not the only one in CCOG that goes on the radio. CCOG Elder Aleksandar Veljic from Serbia has been as well–and in English. CCOG Deacon Ondigo Ochieng from Isibania, Kenya and CCOG host Grantone Otieno  have been on the radio in Kenya. Additionally, we have helped sponsor a radio program in Ghana that Overseer Samuel Ofosu hosts.

In New Zealand, Shirley Gestro continues to manage our Bible News Prophecy online radio channel. Various men in CCOG have been on it. This is another way we reach people.

Doing secular radio interviews, as well as our own radio, gives us an opportunity to reach people who otherwise would not be as open to hearing the Church of God message (Matthew 24:14; 28:19-20).

Of course, being on radio is something that COG leaders have done since no later than the 1930s. Radio was used so much to proclaim the gospel of the kingdom and other biblical messages, that after he left CG7, the late Herbert W. Armstrong initially named his group the Radio Church of God.

Here is a photograph that my wife Joyce took in 1994 of a building in Eugene, Oregon that had been used decades before by the old Radio Church of God (I believe it was their headquarters’ building in the 1940s):

Notice something published by the old Radio Church of God:

Revelation 3:7-13: “And to the angel of the Church in Philadelphia write these things saith he that is holy, he that is true, he that hath the key of David, he that OPENETH, and no man SHUTTETH; and SHUTTETH and no man openeth.” The great door that God has opened to this work is the facility to go into all the world and preach the gospel; the door of radio, the door of the printing press, plus many other such doors. God has set before us an open door and no MAN can shut it. God can shut it, and He will when the work is finished and the Philadelphia Church goes to a place of safety. “I know thy works: Behold, I have set before thee an open door, and no man can shut it: for thou hast a little strength, and hast kept my word, and hast not denied my name” (verse 8).

Notice that this Church has works. It has works of ZEAL and of REPENTANCE. This Church has only a little strength. But, by contrast, the Church of Laodicea believes that IT is increased with goods and has a great deal of strength. Philadelphia has little strength to do this great work that God has given it to do. God has opened the door, and yet look how insignificant, how weak, how little strength we as a Church have to do that work. How much we lack in every way, and yet God has opened the door and has given us certain vital, supernatural, spiritual gifts. Very often we lack enough money to pay the radio bills and other expenses. WE ARE FEW IN NUMBER, while many other eras of the Church of God numbered in the hundreds of thousands. We indeed have little strength. And yet, look at the great power that God has placed before us. (Neff L. What Is the LAODICEAN CHURCH? Good News, August 1959)

The ‘open door’ to the Philadelphians does have to do with gospel proclamation. Consider the following scriptures:

12 Furthermore, when I came to Troas to preach Christ’s gospel, and a door was opened to me by the Lord (2 Corinthians 2:12).

8 But I will tarry in Ephesus until Pentecost. 9 For a great and effective door has opened to me (1 Corinthians 16:8-9).

27 Now when they had come and gathered the church together, they reported all that God had done with them, and that He had opened the door of faith to the Gentiles (Acts 14:27).

We in the Continuing Church of God are going through the open doors in radio as well as with the printing press, the internet, travel, and personal contact. This includes to areas, like Africa, with Gentiles. Because of more and more suppression of the truth (Romans 1:18), radio is a door that may close at any time–but, to a degree, it is open now.

Radio is one of the forms of mass media that we in the Continuing Church of God use to teach people about Jesus’ Gospel of the Kingdom of God (Matthew 24:14) and His other teachings (Matthew 28:19-20).

In the USA, Big Tech took steps to stop Donald Trump and various supporters, including distant ones (see WND: Genuine wickedness is openly manifesting in ‘land of the free’), from being able to communicate over what is commonly called “social media” (see Big Tech suspends Donald Trump, Parler, Sidney Powell, Michael Flynn, and shadow bans CCOG). Furthermore, one ‘alternative’ site was forced off the internet (see Amazon forces Parler offline–loss of speech freedom denounced by the ACLU and is consistent with an old WCG warning). A famine of the word is coming (cf. Amos 8:11-12) and we can more and more see how that can happen in our internet-connected age.

Speaking of Donald Trump, the US House of Representatives voted to impeach him for the second time yesterday (see House AGAIN votes to impeach Donald Trump). This is to go to the US Senate and we will see if enough will vote to convict Donald Trump–if so, legally he would not be able to run for president again.

Partially because of its ecumenical and interfaith agendas, and partially because of modern pressures, the claimed “needs of the times,” the Vatican has declared “that women can be installed as lectors, to read the Gospel” (see ‘Pope, In New Decree, Allows More Roles for Women in Church’). Of course, females speaking from the pulpit was forbidden by the New Testament and was NOT part of the original Christian faith–which the Vatican clearly was not contending for here, in violation of Jude 3.

Notice how a Roman Catholic Bible renders some passages in the New Testament:

34 Let women keep silence in the churches: for it is not permitted them to speak, but to be subject, as also the law saith. 35 But if they would learn any thing, let them ask their husbands at home. For it is a shame for a woman to speak in the church. (1 Corinthians 14:34-35, Douay-Rheims)

11 Let the woman learn in silence, with all subjection. 12 But I suffer not a woman to teach, nor to use authority over the man: but to be in silence. (1 Timothy 2:11-12, Douay-Rheims)

Pope Francis clearly has authorized something that even his church’s rendering of scripture prohibits. Yet, there are many activities open to women–for details check out the article: Women and the New Testament Church.

10 But the day of the Lord will come as a thief in the night, in which the heavens will pass away with a great noise, and the elements will melt with fervent heat; both the earth and the works that are in it will be burned up. 11 Therefore, since all these things will be dissolved, what manner of persons ought you to be in holy conduct and godliness, 12 looking for and hastening the coming of the day of God, because of which the heavens will be dissolved, being on fire, and the elements will melt with fervent heat? 13 Nevertheless we, according to His promise, look for new heavens and a new earth in which righteousness dwells.

14 Therefore, beloved, looking forward to these things, be diligent to be found by Him in peace, without spot and blameless; 15 and consider that the longsuffering of our Lord is salvation — as also our beloved brother Paul, according to the wisdom given to him, has written to you, 16 as also in all his epistles, speaking in them of these things, in which are some things hard to understand, which untaught and unstable people twist to their own destruction, as they do also the rest of the Scriptures.

17 You therefore, beloved, since you know this beforehand, beware lest you also fall from your own steadfastness, being led away with the error of the wicked; 18 but grow in the grace and knowledge of our Lord and Savior Jesus Christ.

Brethren, yes, we know from biblical prophecies that this present age will pass away. We need to be steadfast as there will be many trials and tribulations before it does.