Greetings from the Five Cities region of California.  Another full week working on many matters.

The Spring Holy Days are getting nearer.

If any of you wish to volunteer to host Passover services at your home, please let me know so that we can announce locations that others may wish to visit.

Most hosts would play the  CCOG Passover Service video.  Passover will be after sunset Thursday April 2, 2015.

Because the last day of unleavened bread is on a Friday (April 10) in 2015, followed by a Sabbath (April 11), some may wish to host services for others that weekend.

We are working on Feast of Tabernacles sites for 2015.

At this moment, we are expecting to have seven sites, plus one video site.

We are looking at the Denver/Englewood/Greenwood Village area in Colorado.

In Canada, we are looking at either New Brunswick, Niagara Falls, or Quebec.

We currently expect to have three sites in Kenya and one site in Tanzania.

In New Zealand, we are looking at a site in the Taupo area (in the southern portion of the north island).

We plan to have a video-only site in Silay City, Philippines.

The Feast of Tabernacles will begin sunset on September 27, 2015 and run (including the Last Great Day) until sunset October 5, 2015.

Updated information is at the link Feast of Tabernacles’ Sites for 2015.  More information will be added as we get it.

It took more time that we had hoped, but we now have the electronic version of the BibleNewsProphecy magazine translated into the Dholuo language. 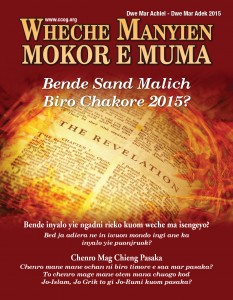 Dholuo is spoken by millions in Kenya, Tanzania, and Uganda.  It likely also would have been the native language of US President Barack Obama’s father (he was a Luo Kenyan).  Many of our members in Africa speak Dholuo.

Although we are printing a copy here for our files, the plan is to print hundreds in Kenya this week.  I sent the file to Pastor Evans Ochieng late Tuesday night and he hopes to get them printed in Nairobi.

I was a guest on a radio program yesterday.  The primary subjects had to do with Israeli Prime Minister Netanyahu’s comments before the US Congress (see Netanyahu: Deal will ‘guarantee’ that Iran gets nuclear weapons) as well as US President Obama’s reaction (see Obama dismisses Netanyahu’s speech).  I tried to focus on Iran in prophecy.  Since Iran is NOT the king of the south of biblical prophecy (Daniel 11:40-43), it may well be that it will engage Israel in war prior to the start of the Great Tribulation (cf. Isaiah 22:1-14).  It may take a regional war to bring a ‘peace deal’ such as the one discussed in Daniel 9:27.

We also briefly discussed about the work of the two witnesses.

Spent a lot of time this week on matters related to our attempts to get the Continuing Church of God in Canada registered as a charity there.

We are working under a deadline from Canadian authorities.  I sent documents to Canada yesterday, and other information today, to hopefully help answer questions that Revenue Canada has raised.

A couple in Canada hopes to discuss this with legal counsel there so we can see how best to proceed.  The members in Canada would benefit if this registration is attained as it will allow tax-deductibility of contributions of tithes and offerings.

Someone emailed me twice this week claiming to be a deacon in a particular Church of God group in South Africa.  He falsely claimed that 33 congregations in that nation had already agreed to leave the other group and come with the Continuing Church of God.

As it turned out, I knew two people who had met that particular deacon, plus I suspected that the particular COG group he mentioned did not have 33 congregations in South Africa.  I ultimately was able to contact the actual deacon for the COG group and he confirmed that I was contacted by an imposter.

We have to deal with a lot of liars and imposters in this age, which complicates that work.  Please pray that I and others will not be deceived by them.  In this particular instance, I immediately suspected that the emailer was false, but some are harder to detect.

Several world leaders have wondered if ‘World War III’ has started or is about to start.  In the past week, Jordan’s King Abdullah warned about it (see King Abdullah and others say WWIII has started).  While WWIII has not started, world events are aligning which will lead to what could be called WWIII (the start of the Great Tribulation) as well as later ‘world wars.’

Speaking of things that may align to lead to WWIII, Forbes reported that if Greece does not leave the Eurozone that this will strengthen that European currency (see Forbes: No Grexit strengthens the Euro long-term; What does Greece bring to Europe?).  The Bible tells of a European power that will dominate the economy for the world, and it may use the Euro as its currency.

Some are concerned that Russia is a threat to Europe and elsewhere (see Is Russia a major threat to the UK and its allies?).  From a biblical perspective, while Russia does have an end time role mentioned in the Bible, Russia may be playing a role in getting Europe to decide to better arm itself (as has the threats from Islam).  But, let me state here that it will be a European power, not Russia, that will invade the USA and the UK at the start of the Great Tribulation.

Although there are many who have said the entire planet is warming up (and ice levels in the Arctic have been dropping as a report out today confirmed), a study came out from China concluding that the ice levels in Antarctica have been rising (see Study finds Antarctic ice increasing, not decreasing).  However, lest we dismiss all  ‘climate change’ talk as political rhetoric, humans do affect the planet and sin will lead to more massive ‘climate change.’  Sin seems to be a factor is some of the odd weather patterns we have seen this year.

1 But know this, that in the last days perilous times will come: 2 For men will be lovers of themselves, lovers of money, boasters, proud, blasphemers, disobedient to parents, unthankful, unholy, 3 unloving, unforgiving, slanderers, without self-control, brutal, despisers of good, 4 traitors, headstrong, haughty, lovers of pleasure rather than lovers of God, 5 having a form of godliness but denying its power. And from such people turn away! 6 For of this sort are those who creep into households and make captives of gullible women loaded down with sins, led away by various lusts, 7 always learning and never able to come to the knowledge of the truth. 8 Now as Jannes and Jambres resisted Moses, so do these also resist the truth: men of corrupt minds, disapproved concerning the faith; 9 but they will progress no further, for their folly will be manifest to all, as theirs also was. (2 Timothy 3:1-9)

Brethren, many are deceived and many despise the truth.

Stand for the truth and have the love of the truth in this deteriorating society.