Elder Aleksandar ‘Sasha’ Velic has been fighting an illness and was not able to record his three radio spots this week.

In the past, we have also had James Martenet do some messages we have put on our Bible News Prophecy online radio. Anyway, James has volunteered to put together some short messages that we may sometimes wish to use to fill-in if Sasha or Steve Dupuie and I are unable to have new messages for one or more times.

While we could put up repeat episodes (and had to do that this week because of Sasha’s health struggle), we would prefer not to run repeats, but to broadcast fresh materials.

So, if you are listening to our program on WRMI or European Gospel Radio, do not be surprised if you sometimes hear James Martenet in the future.

We have tried numerous ways to get Bibles in the Creole language to our supporters in Haiti.

The first place we tried this year, could not do it, and then refunded our funds. The second place, who had accepted our order for New Testaments in the Creole language, has been unable to fill the order, and has since refunded our funds.

So, instead of giving  up, we ordered Creole language Bibles in the USA, and paid a large amount to ship just two. And while they did arrive, there was an additional customs import charge of $15.00 each. Anyway, we are glad we did get a couple of Bibles to Haiti and I have been looking at ways to get more sent there in the future.

Haiti is one of the most difficult countries to live in at this time.

We also sent some funds from the USA office of the Continuing Church of God to assist with the recent famine in Kenya and Tanzania.

That said, received some communication from a non-CCOG pastor in Kenya, who has contacted me from time to time.

Here is something he said to me on Tuesday:

Bob something happens to me.  Don’t now how can I explain it to you and I don’t now how can I called it. There is a time I traveling from my county to another county {in kenya}. On the bus somebody enter into the bus and sits next to me and he hold a book }titled} CONTINUING HISTORY OF THE CHURCH OF GOD. Are you  the one who wrote it? I read up to page 15 that says NO PERMANENT CITY.  Bob my request is that can you share with me books related with GOD if GOD can attach your spirit. Thanks I am looking forward.

Anyway, I told the pastor, that yes I wrote it, that all of our books can be found at https://www.ccog.org/books/ , and that if he wants physical copies of them, he needed to contact evangelist Evans Ochieng as he is the one who gets our literature published and printed in Nairobi, the capital of Kenya.

Other than personal contact, how we typically gain new congregations in Africa is that a leader normally finds out about the Continuing Church of God on the internet and then contacts me–after some correspondence, if they look like they may be serious, I normally refer them to Evans Ochieng, and then he communicates with them. Also, sometimes they run across our literature, and in the above pastor’s case, more than one of those may be involved. We have also had people contact us because of being on the radio and then want literature.

As far as personal contacts go, we received the following report from Pastor Tiongik Sawek in Kenya yesterday: 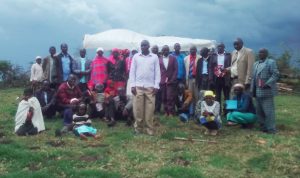 Receive greetings in Jesus Christ. We managed to visit Merigi Tach Arwet local church. The brethren were happy, we learnt a lot and several questions were answered accordingly.

They accept and believe in the Continuing Church of God. So far they have increased in number, we also appoint the leaders to administer in their church.
One of the brethren from the church has donated a plot for church construction. We are happy about this and we pray for financial assistance so as to begin the construction.

Hopefully, we shall discuss and plan for the visit together with Evangelist Ochieng to this area including the Mau region.

This time round I was accompanied together with elder Cheruiyot and later when we were coming back we met with elder Limo at Bomet town, who is doing business at the town, the guy used to be General Conference Church of God Seventh Day. He later joined the Continuing Church of God and currently he is the pastor based at Bomet town administering the gospel. Let’s pray also for him so as to secure a place for worship together with his brethren.
We thank God for the work which has taken place especially at Bomet county where we have realized a lot.
Attached are a few photos managed to take.
May God bless you.
Regards,
Pastor Sawek

It is great that we are having growth.

Evangelist Evans Ochieng sent the following related to registering the Continuing Church of God in Rwanda:

I received a good message from Moise {Nshimiyimana}, Rwanda,  that the process of registering the church in Rwanda is going on very well.
Evans

Moise Nshimiyimana emailed me today and also said that the registration is proceeding well. Two congregations in Rwanda decided after a visit from evangelist Evans Ochieng to finalize their interest in the Continuing Church of God.

The G20 conference took place this week. The G20 is composed Argentina, Australia, Brazil, Canada, China, France, Germany, India, Indonesia, Italy, Japan, Republic of Korea, Mexico, Russia, Saudi Arabia, South Africa, Turkey, the United Kingdom, the United States, and the European Union. While many in the West hoped for more solidarity against Russia for its ‘special military operation’ into Ukraine, many of the G20 are either part of or potential members of the BRICS group of which Russia is a major part of (see VOA: Russia’s War on Ukraine Tears Rift at G20 Bali Summit; TN: Will rise of BRICS in geopolitics edge out US dominance as West sleepwalks into Ukraine war).

Speaking of the G20, discussions related to the possible regulation of crypto currencies as well as central bank digital currencies were to be topics there. The moves towards regulated digital currencies, and away from cash, are consistent with fulfilling prophecies related to 666 in Revelation 13:16-18 (see also WEF cancelling cash? India wants G20 to regulate crypto).

Also, at the G20, Klaus Schwab, president of the World Economic Forum (WEF) spoke (see ‘Unelected Klaus Schwab Appears Out Of Nowhere Again At G20 …’). The fact that he was a featured speaker shows that he, the WEF, and his “great reset’ agenda has serious backing by many of the world’s political leaders.

The WEF and many of the G20 have a pro-LGBTQ+ agenda. On Tuesday, the Church of Jesus Christ of Latter Day Saints (the Mormons) endorsed the improperly labeled ‘Respect for Marriage Act,’ and yesterday the US Senate passed this bill. The Alliance Defending Freedom correctly has concluded that this bill will hurt religious freedom and churches who attempt to hold to biblical views on sexuality and marriage (see Mormon Church endorses, then US Senate passes, pro-homosexual marriage bill). The Bible warns that the approving of sexual immorality and homosexuality will brings God’s judgment (e.g. Romans 1:18-32).

1 I, therefore, the prisoner of the Lord, beseech you to walk worthy of the calling with which you were called, 2 with all lowliness and gentleness, with longsuffering, bearing with one another in love, 3 endeavoring to keep the unity of the Spirit in the bond of peace. (Ephesians 4:1-3)

Brethren, we need to continue, despite things we must endure. Bear one another in love.